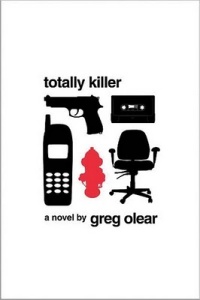 Alright, book number two of what (depending on what I do today) we may call the Great 09 Turkey Read.  This one was a fabulous gift from The Olive Reader, one of my favourite blogs about books – they do contests now and then to post a comment and win one of the books they’re putting out.  I previously got a copy of Jeffrey Ford’s The Shadow Year, which I loved, and so it was only natural for me to go for another competition.  After all, what’s better than a free book that you know next-to-nothing about?  The surprise is always fantastic, even if it ends up being a dud.

This book was NOT a dud.  It wasn’t spectacular, but it was pretty darn good.  It’s author Greg Olear’s first novel and it was a fine debut.  Some issues, yes, but all of them are literally able to be written off as first-time-jitters. So, basic sum-up: 1991, New York City.  Main character is recounting the story from 2009.  There’s a hot girl, a sort of shady (but in that shiny NYC way) organization, sex, violence, and conspiracy theories out the yin-yang.  A page-turner, yes, albeit a little bit of a predictable one.

My biggest problem with the book was the relentless pop culture referencing.  Some of it was cool (when the main character is offered an ‘acting’ gig on the first round of “The Real World” – his reactions were priceless) but a lot of it was just self-serving.  It didn’t feel like Todd (the main character) but instead it felt like the author injecting “HEY ITS 1991! KNOW WHY?! BECAUSE OF X/Y/Z THING FROM 1991! COOL!”  It just got grating at times.

Past that, I didn’t mind the predictability of the plot or the occasionally pulpy plot.  There were some weird out-of-character moments for Todd to the reader – declarations of a somewhat Homeric bent – but even those were literally momentary and didn’t really detract from the novel at hand.

Some of the quotes about this book have likened it to American Psycho.  I keep reading books likened to American Psycho and the only one that has ever come close to being similar was Kill Your Friends by John Niven.  That was almost TOO similar and suffered because of it.  I guess this is the curse of living in the era of Ellis, McInerney, and Palahniuk – any “edgy” novel is immediately likened to one of their novels and thus given that publicity boost.  Even though most of these novels don’t deserve to sit within two rungs of those guys’ books.  Not to say that these novels are bad – I enjoyed the hell out of Totally Killer in the 30 hours it took me to read (interrupted mostly by having family over for Thanksgiving) – but that they are not the convention-smashing pieces of the mid/late-90s.  Hell, even those three authors I mentioned have pastiched themselves at times.  I just wish people would allow works to stand on their own instead of needing to compare them to other, greater works.

To Sum Up: A good fast read – good for a train or a plane or the winter (set mostly in a New York summer/autumn, you can practically feel the heat rising off of the East Village streets).  I’ll definitely be interested in seeing Olear’s next novel and where he goes with it.