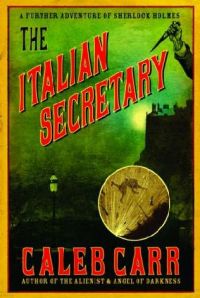 First re-read of this little adventure.  Possibly, too, the last entry before school starts again (though I shall endeavor to make that untrue – still, I think 2666 is up next, so… we’ll see) and so I thought it somehow fitting.  That and I’ve been unable to stop enjoying my memory of the recent Sherlock Holmes film with RDJ and Jude.  Instead of revisiting the classic Holmes, which I’ve done many times in my life, I thought I might revisit a more recent adventure – one that I’d hoped would be the beginning of a new series of sorts, but it hasn’t panned out that way.

Caleb Carr has written a couple of books that I haven’t read.  I knew very little about him going into this book the first time and coming out of it the second time… well, I still haven’t picked up his other books.  That’s not to say that this was poorly written but just that it wasn’t particularly well written either.  This is a shared trait with the Conan Doyle novels and stories (“Blasphemy, Squire Saunders! To a man of the Lord!” – two points for guessing that reference) and being as this is a “pastiche,” I can’t really fault the author.  Still, the novel was wholly engrossing and a quick read (again, like the Conan Doyle ones) and just looking at the cover (which I’ll hopefully get around to attaching sometime soon), you can’t help but wish there were more.  Across the top, “A Further Adventure of Sherlock Holmes” – would that there were MORE of these “Further Adventures”!  But I digress.

The Italian Secretary features Holmes and Watson headed North to Edinburgh – a city I’ve visited between readings – to investigate some shady business for the Queen at Holyroodhouse.  Things get off to a quick start, reintroducing Holmes and Watson and even Mrs. Hudson in short order.  Mycroft, Holmes’ brother, makes a sizable appearance in this novel and I’ve always found him rather interesting.  A mind supposedly sharper than Holmes’ but a physique completely opposite – the two brothers are a very interesting duo, I admit.  Speaking of images, by the way – it was weird how in my head, the Basil Rathbone Holmes (who’d always been there, since I was a child) is now mixed with the RDJ Holmes.  Jude has admirably stepped up as Watson, replacing the bumbling Nigel Bruce.

Anyway, the novel features some rather fascinating discourses on ghosts – the ghost of David Rizzio, the titular secretary, in particular.  I’ve always liked the Holmes stories where there’s a touch of the unreal or supernatural.  The fact that the existence of Rizzio’s ghost is left rather stunningly open at the end of the novel… well, I liked that too.  Victorian London was a time of ghosts and I’d not have liked to see them tossed away by a man like Holmes.  He certainly uses his deductive powers and solves the (admittedly pretty simple) mystery but allows for the otherworldly influences at the same time.

I just wish that the plot itself had been a little more concrete.  The atmosphere, the characters of Holmes and Watson and Mycroft, the set pieces near the end… all there, all very well done.  But I didn’t really care about the mystery they were solving because it was always a little too ambiguous.  Everyone thought it had to do with a plot against the Queen and in reality it had to do with an illicit tourist attraction in Holyroodhouse?  I mean, that’s essentially what it came down to and that was rather weak.  There could have been something a bit heavier at the end of the game, but Holmes and Watson seemed satisfied enough (near-death adventures tend to inspire that, I suppose) so I guess we should be too.