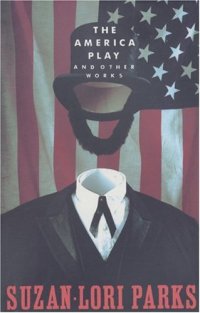 The America Play is not the first piece of Suzan-Lori Parks’ theater I’ve read.  My mom got me 365 Days/365 Plays a few years ago for Christmas because it struck her as interesting… and interesting it was.  I’m not talking about that book right now, but its important because I was slightly better informed coming into this piece than the rest of my class (excepting those who’ve read Topdog/Underdog, which I have not read but should read).  Her writing style is… interesting.  It is unrestricted by convention, for one thing – there will be entire sections of a piece where the character names alternate but without dialogue.  These are moments intended to be non-physical communication… or nothing… or whatever you (the reader, the director, the actor) choose.  THAT is an intense idea and one that takes a surprising amount of getting used to.

The America Play has two acts, both pretty wacky.  The first one features The Foundling Father, a man who bears striking resemblance to Abraham Lincoln and has set up a replica Great Hole of History out West and there runs an attraction allowing people to renact assassinating Lincoln – from the perspective of John Wilkes Booth.  The second act sees his wife and son, both speaking in a theatricalized Negro dialect, trying to find him some years later.  To me, the play speaks to the echo of history – the way history echoes down to the present but is distorted because an echo, by its nature, is a distortion of the original sound.  It is never exactly the same – something is lost in the translation, as it were.  This is a powerful play with a lot of message packed in behind it.  You need to be willing to do the deep thinking in order to get to it… and to be honest, I don’t think we did that in Contemporary.  We got too caught up in the idea of race and this play is about so much more than race.  Yes, race plays a pretty central role…. but its is about America.  Yes, race is a huge part of America, but it is MORE MORE MORE than that.

The essays Parks included at the front of the collection are as, if not in some ways more, interesting than the plays themselves.  She talks – in her wonderfully idiosyncratic way – about theater and about writing and about creating.  “from Elements of Style” is brilliant: it deals most directly with The America Play but the lessons she presents are applicable to anything.  “Why does this have to be a play?” with emphasis on the why have and play – that’s brilliant shit.  Things writers don’t think about sometimes – including yours truly.

The other plays in this collection are equally as interesting and as challenging as The America Play, though I think I found them less “important” to me.  I was less engaged by them, though I found them interesting enough.  I don’t even really have much to say about them and, in the wake of 2666, I’m not sure there’s anything I really could say about them that would make much sense.  As they don’t really make much sense to begin with.  Scott said something in Contemporary about The America Play being “set” during Reconstruction.  I thought “da fuck?” and went back… and it makes sense, although there’s that tv set…

Anyway.  I guess Suzan-Lori Parks wasn’t the best choice to cleanse my palate after 2666.  Maybe I’ll take the rest of the day… and maybe even tomorrow… and just watch tv or something else useless.  Right.

Rating: 3 out of 5.  Suzan-Lori Parks is a tough playwright to deal with.  Her plays are better seen than read – to the point that they are almost indecipherable at times when simply read.  I’m glad to have this on my shelf and the essays are powerful but the plays themselves?  I can’t stand just reading them.  I need to see them, I’m sorry.