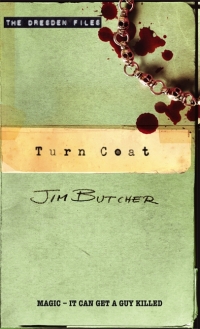 Alright, this is what I was talking about!  Something fun, something exciting, something well-written, and something (above all else) thoroughly enjoyable.

I found The Dresden Files first through the short-lived SciFi show… which I promptly forgot about after an episode or three… and then, later, through the awesome covers of the Orbit paperbacks in England.  See, the American paperbacks look like what I might call “slum fantasy” – they’re made for the people still playing Magic: The Gathering at age 30.  Now, I played a lot of Magic in my day and if you wanted to play right now, I’d probably still be pretty decent.  This, however, is neither here nor there – I would respect myself just a little less because, yes, I do judge books by their covers.  This is a GREAT series but I would not be caught dead reading those books in American paperback.  The type font, the stupidly “this isn’t a romance novel but could be” Dresden figure… The Brits, however, put them together as though they were literally files.  Punched out “The Dresden Files”, taped on names.  That’s what I’m talking about.  I picked up Storm Front around the end of April last year and was done the first ten books of the series by the time I left at the beginning of June.  Yep – I spent a LOT of time sitting in Hyde Park and Leicester Square reading this series.

Then, as inevitably happens, I caught up with the publishers.  Turn Coat had just come out in hardcover – would be nearly a year before I could get the next Dresden adventure.  Thank the gods for small things – turns out the paperback came out the second to last day I was in England for Spring Break.  I knew, deep down, that the first thing I read after 2666 (not counting plays) would have to be this.

The weather here in Boston came through for me, too.  It has been downright beautiful this week after the horribly rainy weekend – I let the sunny wondrous days match up just like they did in Leicester Square a year ago… and as a result, I ate through the book in a few days.  Could have done it faster, but I did want to savor it a bit.  And oh was it worth savoring.

It would be too much for me to catch you up on the last ten books, but the short background is that Harry Dresden is a wizard PI in Chicago.  Only wizard in the phonebook – look him up!  He’s always been a bit of a wild card to the powers-that-be in the wizarding world but they’ve finally accepted him as one of their own, despite his unorthodox methods and ‘tude.  He has a vampire half-brother, a best friend (and romantic foil, of sorts) cop, a recently acquired apprentice, a Chinese temple guard dog, and a cat.  Oh, and a talking skull – well, a spirit trapped in said skull – named Bob.

Morgan always thought Dresden was guilty of a crime from the past and the two essentially hated each other.  Dresden has grown a lot since he was under the Doom of Damocles with Morgan as his executioner/guardian.  It was fun to watch him deal with helping his “enemy” and the way they have grown to respect each other.  There were some kick ass fight scenes, particularly a “big guns” battle on this strange island in the Chicago harbor – which I think we’ll be hearing more about in the future.  There was a lot of what one might call “political intrigue” in this book and I found that wildly enjoyable.  There was very little real-world stuff in this book (as opposed to some of the earlier ones, which were based more in “the magic-world seeping into the real-world”) and that, too, was enjoyable.  The pieces are on the board and shit is HAPPENING and its wild to watch the series progress from a more light-hearted “wizard PI!” to the more serious side of things.  I just hope it doesn’t ever get too serious – Dresden’s wit is one of my favorite character traits of anyone in fiction.

There’s not much “literary merit” for, say, the Tournament of Books in this series.  There is a lot of fun, though.  Eleven books in and I’ve yet to be bored once – that’s pretty impressive.  I can’t think of a series that has held my attention so strongly – Discworld has its ups and downs, so too do the Shannara books.  I guess A Series of Unfortunate Events was pretty solid – until the end.

Rating: 4 out of 5 – not the best Dresden book, but I’d say top three or four.  Not some monster literary event but perhaps more enjoyable because of that fact.  You won’t know what the hell’s going on if you’re just jumping in here but if you know the series, you’ll love it and everything about it.

Once Upon A Time IV: So technically I finished this book yesterday… but I saved the last ten pages for this morning so that it could qualify for OUAT4.  This will count for “fantasy” – in my opinion, the easiest of the four categories.  I mean, magic and wizards and fairies and the Nevernever… doesn’t get much more fantasy than that.  Someone described this series as “urban fantasy” and as much as I hated that at first, now I find it quite fitting.  So there it is!