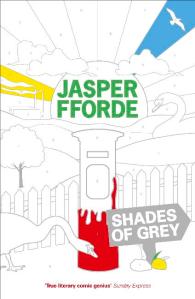 Jasper Fforde is one of my favorite writers.  The Thursday Next series is reliably brilliant, and when the Nursery Crime series was birthed out of that, I was all too happy to go along for the ride.  He took a year off last year and it was (I admit) a little shocking when he announced that he’d be returning with a brand new series, outside the realm of the two previous ones.  Nerves nerves nerves, of course – but I shouldn’t have been worried.

The set-up is this: it is some indeterminately large amount of time into the distant future.  Something That Happened screwed up the world and this guy Munsell came and set things back on the right path.  People’s pupils are smaller and they can only see certain colors – this is how the world is run, in a Chromogencia.  There are predictably Orwellian aspects but Fforde just has a great time creating this world and referencing things from the past (our present).  During a list of what books used to be in the library, it was a blast to try and decipher the garbled remembered names – Sheer Luck Homes was my favorite.  There was also The Force Bear, which was a nice wink to a Nursery Crime novel.  Little things like what has remained and what has been warped… it was just FUN to read and think about.

The biggest problem with the book is that it never quite gets going until its gone.  The last fifty pages or so were exciting and interesting but so many things happened and too many character shifts occurred for me to really feel as though the book should have ended when it did.  I wanted more – so that’s a good thing.  I just realized, though, that the first 300 or so pages of the book were a little… well… there were FUN but that doesn’t necessarily mean good.  Fforde took his time creating this world, which I really appreciated – but he started to rush a bit as we got closer to the “plot” part wrapping up.  Still, I’m very excited to see where things are going to go with this new creation.  Jane and Eddie are fascinating and I was genuinely surprised by the twist at the end.

There’s just so much that I’m unsure about in this series – and I think that’s how he wants it.  I want to know so much more about Munsell, about the Leapbacks, about why National Colour does what it does… so in that sense, this book (beautifully covered, by the way) is great because it sets everything up brilliantly.  However, its going to be at least three more years before the next one (apparently another Thursday Next and then another Nursery Crime are on tap first)… so will I have enough to go on by the time it comes back round?

Oh, also – this book is called Shades of Grey and subtitled “The Road to High Saffron” – yet that only appears on the title page and at the end, not on the spines or anything.  I’m predicting some confusion in the future…

Rating: 4 out of 5.  A strong book that, despite what I said about it feeling rushed at the ending, kept me gripped the whole time and I can’t really knock it any lower – because it was just so damn fun.  We’ll see where the series takes us, I suppose – but until then, I’m excited to think about it in the back of my mind.  (PS sorry for the small review – finals and now senior week have really sapped my ability to do much more than read and speak…)