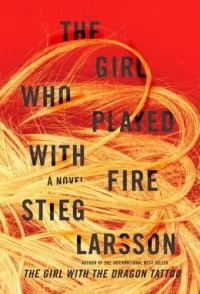 I don’t actually have much to say about this book.  It is even better than The Girl With the Dragon Tattoo and I am itching to read the third book in the so-called ‘trilogy.’  Yeah, I air-quoted that.  Know why?  Larsson, before his untimely death, had nearly finished a fourth book and had outlined a further two, with little bits and pieces written here and there.  He’d planned ten books.  Google this stuff, I don’t have time to write about it here.

I’m reeling from the end of the book.  I can’t even fully calculate… comprehend… where the first book ended in a pretty tidy fashion, this one ends with a (classic) cliffhanger – I can just see the film version fading to black on a heartbeat.  I won’t spoil it, even though any information you’ve read about the third book will automatically spoil this one.  I actually have no idea where the third book is going to go from here – except that I’m excited to see it.  I’m giddy at the thought of diving into another book with NO IDEA of where its going, but already knowing the characters and the situation and just going along for the ride.

People have been superlative about these books since they started coming out but, like few other series (I can think of the Harry Potter books, specifically), they deserve the accolades.  Look, Larsson isn’t the best writer (nor is Rowling, just to make the point).  There are aspects of the plots that are, sometimes, derivative.  Larsson luxuriates in his words and has no problem letting a plot spool up over the course of…. 150-200 pages.  Seriously.  It takes FOREVER for the ‘plot’ to get going in this book – but it doesn’t matter, because through the sheer virtue of his voice, Larsson brings you in and wraps you up and you’re just in it.  You’re there.  You’re ready to go.

Then, it continues to ratchet up and even when he “takes a break” – usually Blomquist sitting down and “thinking about what he knew so far” or something like that… it is never boring.  Over 600 pages flew by the space of a few days – and it would have flown by faster had I not had to go to work and so forth.  Was this pulpy?  Yes, a bit.  Was it, at its core, nothing more than another mystery novel?  Sure.  Yet it deals with so much more.  It is a hypnotic use of language, it is characters who demand your attention and arrive fully formed, it is the sort of book that gets people into reading again.  Like the Harry Potter books.  And you know what – I’ll bet Lisbeth Salander could kick that little wizard kid’s ass.

Rating: 5+ out of 5.  The book is complicated bordering on confusing at times and many people write it off as nothing-spectacular in terms of prose, etc.  But I’m giving it my second (on the blog, anyway) 5+ for a reason.  Because it was one of the most engrossing, entertaining, and complete books I’ve ever read.  It was so put-together and so exciting and so enjoyable that I can’t award it anything else.  I am waiting eagerly for Thursday, so that I can borrow the hardcover from Christina (because I cannot wait a year for the paperback.  but I also can’t buy the hardcover – we have the shelf aesthetic to consider, people).  As Gravity’s Rainbow was more, so too was this book.  It is more than the sum of its parts and I am sorry that Stieg Larsson was lost to us before we even got to know him.