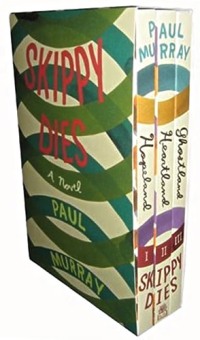 I really loved the first third of this book.  This is not to say that I didn’t like the second and third… thirds… of the book – but simply that I didn’t love them.  There was something almost magical about the first third – titled, in my three-part paperback slipcase edition that looks incredibly snazzy (although jeez, publishers, could the slipcase itself be any flimsier?) “Hopeland”.  “Heartland” and “Ghostland” – parts two and three, respectively – just never quite matched that magical feeling throughout.

There were moments, of course.  When Howard takes his class out on an unexpected field trip, the concert near the end of the book, Skippy’s dates with Lori, a few other things… but there was also a bit of bloat, a bit of drab “let’s move it along, shall we?” time that rather killed much of the momentum of the book as a whole.  Side note on the edition I read: the splitting-into-three books really actually helped alleviate some of that bloat, because the book was rather evenly split and thus after about 220 pages, you got to start a new book.  Sort of.

Paul Murray’s writing is engaging and he does some fun things with text and tone at times.  Drugs – because, at an Irish private school, of course there are drugs – do hilarious and sometimes scary things to the various narrators, as does love.  A scene involving one character’s interactions with two of the female characters (I don’t want to spoil it) is revolting in its awfulness but depicted in such a unique way that I didn’t mind the awful acts being described.  I can’t say much else about it, though…

The Halloween Hop that ends part one was awesome – as should happen on Hallows Eve, everything in the natural world goes just a bit wonky.  That and Ruprecht’s experiments with string theory (heady stuff, by the way, for a novel ostensibly about early teenagers) were easily my favorite moments.

Less-than-favorite moments: how much of the adult stories seemed to be tacked on as afterthoughts.  I liked Howard and wanted to spend more time with him – but I didn’t care about him because he never seemed anywhere near as developed as the kids.  I also don’t know how I felt about the TV-teaser stylings of putting Skippy’s (admittedly titular and therefore anticipated) death at the very beginning, then jumping back before catching up and moving on.  Not sure I’d change it, just don’t know that I really liked the decision.

Rating: 4 out of 5.  The book is overlong and its ending is a bit of a cop-out (and by a bit, I mean wholly disappointingly a cop-out) but there’s a great amount of the magic of early teen years in this book.  We forget, often, how much magic was in the world in those days.  Sure, it was also a time of torment and anguish and literal growing pains in every sense… but there was also a lot of magic in the world.  It was easier to believe in things, back then – and its scary to see these kids (younger than I was when reality started to hit) give up on some dreams and magicks so early.  But then, maybe that’s the message.