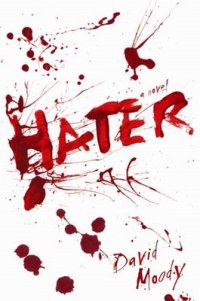 I feel like I’ve been in a bit of a rut with books of late.  With the exception of Soulless, everything has been squarely three-star reading.  It’s all just… you know, sort of middle of things.  Not bad but not altogether great either.  Just… okay.  Hater falls into that “just okay” realm as well.

The book leapt out to me at some point when I was in a Barnes & Noble and I just needed to buy it.  The psuedo-zombie idea was an interesting one: people are suddenly stricken by some kind of virus or SOMETHING that turns them into overwhelmingly violent crazy looney people towards anyone nearby.  Set in an unnamed English town (pretty sure it’s actually Cardiff – so, I mean, right away, scary… fucking Welsh…) featuring “average” characters – none of whom are actually likeable, by the way – and featuring very mundane and spare text, the power really only comes from the “unknown enemy” fear that pervades the story.

Seriously, the main character (Danny) is pretty unlikeable.  As is his wife.  As is his father-in-law.  As are his children.  None of them are drawn with any kind of details – they’re all broadstroke stereotypes of the sort of British people that I really hate (the chavs, basically).  This is a huge detraction.  There’s plenty of violence, some of it a bit unnecessary (did there have to be a scene where one guy ‘turns’ while he’s performing a vasectomy?  REALLY?) but all of it handled very bluntly and realistically.

The real power, as I said, comes from that idea that everyone becomes paranoid.  That paranoia you feel on the street today – why is that guy walking so close? does that guy want to blow up our plane? will that woman hurt that kid? etc – is amped up insanely and that’s what makes the story worthwhile.  The twist (which is pretty blatantly obvious to anyone paying any kind of attention… which the main character clearly isn’t, making him even less likeable) brings up some fascinating issues – I won’t spoil them, since this is becoming a film in the near future – about what “hate” is and what it means to “hate” and what it means to try to survive in this (or any) world.

Rating: 2.5 out of 5.  I realize, as I write about this, that I really hated all of the characters and their characterization… so it loses a full point – the half point came from the specific philosophic issues that I really enjoyed.  There’s a quote on the back about this book looking into “the most salient emotion of the 21st Century” and that’s very true.  If there’s one thing this book did do… it made me think about hate and how we’re all just so angry and violent.   So be careful the next time you yell at someone.  You never know who will be on your side… or who’ll be a Hater.