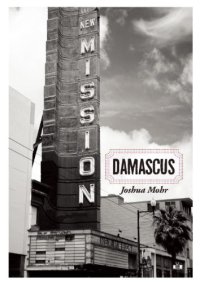 The Short Version: At a bar called Damascus in the Mission District in San Fran, there are all kinds of assorted odd-types.  They’re all damaged in their own ways and they find solace in this dive.  It takes an art installation about the Iraq War to change their lives and remind us all just what kind of country it is we live in.

The Review: Interesting story about this one.  This is, I think it relatively safe to say, a book that would’ve otherwise passed me by.  Perhaps some great reviews (once it hits stores in October) might’ve put it on my radar… but I think I would’ve missed this one.  Except Josh Mohr, the author, reached out to me after seeing this blog and finding me on Goodreads.  He asked me if I’d like an advance proof of the book, to read and review and hopefully (if I liked it) recommend.  This isn’t like There Is No Year – this is the author himself, reaching out months before publication.  This book sitting next to me is an “uncorrected proof” – although I didn’t notice any errors, FYI.  So this was a pretty cool thing for me and I was honored to tell Josh “yes, I’ll read it!”

The gamble (on both of our parts) paid off pretty well – because I really liked this book.  Would’ve been a little awkward had I not, you know?  But, despite a few bumps here and there, I found this to be a thought-provoking and (perhaps more importantly) wholly engaging little novel.  And it is little – my copy runs just over 200 pages.  Barely bigger than a novella, really (the word count, I suppose, is what would define that).  But its size is one of its blessings – had it been longer, I think it might’ve overstayed its welcome.

The book starts off in a way that just gets me: the narrator (who otherwise remains relatively third-person omniscient) starts the story.  “Let’s start this one when a cancer patient named No Eyebrows…” is a hell of an opener.  It reminds me a bit of Sharp Teeth, if I’m being totally honest – the classic invocation of The Beginning.  Not quite calling for inspiration from the gods or invoking the muses for an epic – but there’s a sense of story there.  The author takes a moment to invite us inside.  There’s almost something familiar about it, even though I’ve not read either of Mohr’s other books.  This is another story, in the pantheon of stories – welcome to it.  The other moments where that narrator’s voice appears were also welcomed happily.

Of course, that opening sentence also worried me.  The cancer patient’s name is “No Eyebrows”?  Pretty quickly we’re introduced to characters named Revv and Shambles and the owner of this bar has a birthmark like a Hitler mustache?  Weird names/attributes for weird people is so often a tired cliche – it’s like “look, this person is strange!” when you could do so much more to show me that they’re strange.  That they’re damaged.  That they’re the sort of sad-sack people you hope you never become.  But I fought through the initial urge to roll my eyes… and discovered some wonderfully deep individuals.  Shambles, who remains perhaps the most enigmatic (that ending…), was warm and loving and had a bigger heart than a lot of real people I know.  No Eyebrows – when I found out his real name, I actually said it aloud and laughed to myself.  Because it seemed strange – that person is not the one I’d gotten to know; I’d gotten to know No Eyebrows.  They were different, slightly.

Even the Hitler mustache (if there’s one scene I really did roll my eyes at, it was the scene with the little girl calling him Hitler) on Owen faded away – the Santa suit idea was hilarious and (this is, perhaps, most telling about how quickly I got sucked into the book) not-at-all ridiculous.  When he bought the Santa suit, I simply thought “yeah, okay” and kept right on going.

The plot itself is somewhat loose – although there is a central story, which I’ll address in a moment.  This book is very much a collection of people’s lives, all intersecting with this bar called Damascus.  It’s also a story about America in 2003 (now addressing the central story, ps).  About who we were at that dark, dark time – and, in some ways, about who we still are.  Bin Laden’s death adds an unexpected layer to this novel because that death, while largely symbolic, is still a note of closure on the whole damn reason we got into Iraq.  And I remember how frustrated everyone was in 2003.  Think about The Hurt Locker and the mental stresses those soldiers go through – well, there’s a lot of that in this book.

See – Owen, owner of the bar, agrees to host an art installation in which a young artist has painted twelve pictures of soldiers who died in Iraq… and she nails a living catfish to each of them.  Her idea is to let the fish stay and rot and smell and thus remind everyone, viscerally, just what is happening in Iraq when our countrymen are dying.  Is this a little sick?  Yes.  Absolutely.  But it also makes a pretty strong point – and one that it would’ve been good to continually remind everyone of as our soldiers were dying over there.  The reaction of the soldiers who see the installation – which I won’t spoil for you here – is not surprising but its also terrifying.  The blind passion with which people will not tolerate divergent opinions or even divergent ways of expressing the same opinion… that will be the downfall of civilization.  Blindly hating on someone else just because you don’t understand or they offend you or they think about something differently than you do.  I can’t even look at the cover of this week’s New Yorker (the erased drawing of Bin Laden) the same way I might’ve before I read this book.  There’s something about this book and what happens to the installation/the artist/the ideas they represent that just… makes me think somewhat differently about what it means to show vs. erase the image of someone no longer here.

I’ve gone on for a long time – bit longer than I often do.  This is because, as I mentioned to Josh in an email last night, the book made me pause when I finished it.  I put it down and had to just let it sit for a while.  I had to let my life resume, go through my day at work today, and now come back to the review just to let the book settle a bit.  I was not expecting to find the book so thought-provoking, so (in a way) challenging.  I haven’t even talked about the excellent portrayal of a cancer patient – one that most books wholly devoted to the subject would be hard-pressed to come up with.  Sure, the book does at times get a little too clever for itself.  Sometimes, it feels a little too indebted to authors like Chuck Palahniuk and the modern nihilists.  I’d even say that the pacing of the end could’ve been rearranged a bit – I wasn’t sure I liked the order in which the stories wrapped up.  But none of that changes the fact that I never wanted to put the book down.  Not once.

Rating: 4.5 out of 5.  The flaws it does have are ones that keep it from a perfect rating – but I think that its flaws actually make it a more appealing book.  It’s scrappy, small, proud to put it all out there and then leave you be.  The author’s note thanks the reader for taking the time to dip into this book in particular – and that’s rather what it feels like.  You dipped in and then it was over – but that short time you spent with it was well worth the effort.  Joshua Mohr is one to look out for – he’s only going to get even better and I’ll be proud to say I was there when Damascus first came out.