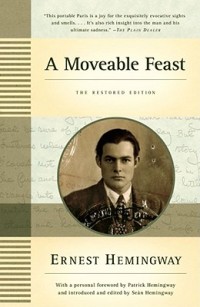 The Short Version: Ernest Hemingway’s memoir of his time spent in Paris, featuring stories both of writing and of meeting and living with other literary lights of his generation.

The Review: I’m a little embarrassed to say that this is my first experience with Hemingway.  I know, right?  Somehow, he (and Faulkner – they are, for some reason, associated in my mind) fell through the cracks in all of the many literature courses I’ve taken.  That’s what they say about lit courses, though – no matter how much you read, you’ll always miss somebody.

Maria, my old boss at The Public Theater, gave me this as an end-of-internship gift.  She told me that it is one of her favorite books and that she was reading it just as she came to The Public and felt a kinship with young Hemingway – meeting and working and becoming friends with these impressive figures in the theater much as he did with those of literature.  I completely understand.

Perhaps it is due to Hemingway’s simple prose – but he just makes it seem so matter-of-fact that, yes, he was at Gertrude Stein’s apartment or yes, he was driving up from Lyon with F. Scott Fitzgerald.  The funniest and most “ohhhh” celebrity moment is probably when he mistakes Alistair Crowley for some poet.  But as I read this book and reflected on my time so far at The Public, I realized that I have a number of similar stories.  Oskar Eustis and Suzan-Lori Parks know me by name, Steven Spinella complimented me on my voice & diction, I’ve had the privilege of sharing lunch with Tom Aldredge, and so on.  So there is a refreshing reality to the book – because it is so simple and so matter-of-fact and that’s, really, how life goes.

Of course, I have to talk about my first experience with Hemingway’s prose.  I have never, in all my years of reading, experienced anything quite like the sensation of reading Hemingway.  I can’t accurately relate it to anything, I just know that it is truly unique.  He talks, early in the book, about the methodology – stripping away anything superflous or flashy, instead saying what you mean in the simplest way possible.   As you’ve no doubt realized, if you’ve read even this review let alone anything else on this blog, I’m not someone who writes like that.  I don’t even know that an author could, really, write like that in today’s society.  What Hem did was radical at the time – the fact that it still feels radical to me, nearly a century after his work started to be published, just goes to show that no one else (at least, no one else I’ve encountered) has done the same thing.  There is an intensity required – a singular drive of purpose – to write like this and I just don’t know any author who would so ruthlessly pare down their writing.

The stories of the book are quite entertaining, by the way.  I don’t mean to gloss over that.  They’re beautiful little insights into a life well-lived at a time when (as it seems) life was so much simpler to live.  The veracity of the book is arguable – Hem himself writes that the reader could well believe it to be fiction if that suited them and it has been reported that his depiction of their “poverty” was grossly exaggerated – but that doesn’t matter.  I treat this like a memoir because it, as the last lines say, is a memoir regardless of its veracity.  The cases of our memory, when opened, may reveal things that look differently from how they actually happened – but that’s the way our minds and our memories work.

Rating: 5 out of 5.  Like a refreshing glass of ice water on a warm day.  There is something easy and clear about Hemingway’s writing and I’m interested to see how this writing transfers to his fiction.  For now, though, I not only understand my boss’ love for this book – but I feel the same way she did and the same way Hemingway felt, as I begin to develop relationships with the grandest figures in my field.  This is a book for any young artist in any profession – it is a story of living and working simply.