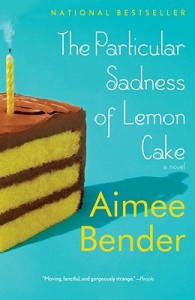 The Short Version: On the eve of her ninth birthday, Rose develops the peculiar ability to taste not only the innate details of food – where it comes from, down to the particular factory or farm in the world – but also the emotions of the person who made it.  Suddenly, she’s privy to a whole realm of information she had previously never even imagined.  She grows up with this ability, struggling to fit in – but it turns out her family has more secrets than she knew.

The Review:  This book seems like the plot of a Sarah Ruhl play, doesn’t it?  A girl who can taste feelings in her food?  If that’s not “magical realism”, I don’t know what is.  The Ruhlian plot goes awry pretty quickly though – because Aimee Bender is not Sarah Ruhl.  This may be an unfair comparison but the fact remains: the book doesn’t live up to the promise of its premise.

Rose is an interesting enough narrator.  She has to go through the growing pains of being nine – then a teenager – then a young woman, all with the burden of being unable to enjoy a meal.  Even her own cooking opens up untold waves of emotions she didn’t even begin to know she was feeling.  So finding her solace in processed foods was an inspired touch.  The early scenes with Rose and her mother, discovering her mother’s deep sadness, as well as the sequence where Rose and George (her brother’s best friend and her crush) go on a fact-finding mission at a cookie shop were delightful and as bursting with imagination as you’d hope. Unfortunately for those beginnings, Bender’s interest in her protagonist wanes pretty quickly and she starts to bring in more complications.  She seems to want to turn the novel into a teen-lit kind of novel – kids in middle school/high school! drama! – but never commits fully and instead we just sort of bounce around through Rose’s life a bit.  SPOILERS COMING…

Rose’s brother, as it turns out, has his own ability – he can disappear.  Completely.  He eventually disappears into a chair for good – but I found myself wondering why this was necessary.  The plot becomes trying to figure out what’s up with Joseph when it’s pretty obvious to just about anyone reading that he must have a gift and maybe it involves disappearing, considering that’s what he’s been doing for quite some time.  So I think the teen-lit plot might’ve actually been more engaging – to see Rose using her talent for good (and evil) by having her friends make her something or what-not.  Bender dabbles with this plot at one point but it’s a half-hearted attempt: a new friend believes in Rose’s gift but ends up abusing it and when Rose cuts her off actually calls her a “drug pusher.”  At about this point, I started to lose patience with the novel.

There are some interesting developments on the romantic side of the plot – I was surprised but happy to see that George actually had feelings for Rose… and bothered that it seemed, in the end, like a neglected plot point that Bender was too careless to fully remove.  Then there’s the mother’s affair.  I don’t understand the way Rose went about dealing with it – by completely ignoring it.  Too, I don’t know how it never came up – the affair lasts for quite a long time and you have to imagine it’d’ve been obvious at some point to the husband (who seems pretty sharp).  This whole plot just frustrated me and went nowhere until about twenty pages from the end.  And that’s being generous.

Maybe my frustration with this novel comes from the fact that my family has a much more open dynamic – we all talk about everything, all the time.  Why didn’t Rose try harder to explain her gift to her parents?  Especially seeing as (again, SPOILERS that were pretty obvious about the second time it gets mentioned in the book…) her father probably has a gift as well.  Why didn’t she do something else, knowing how her parents were feeling, to help them – instead of just watching them from afar?  Something just bothered me immensely about this.  I’m all for families who don’t act like mine – but I get the sense that Rose was a child who would reach out to her family and when she doesn’t, it seems strikingly out of character… even though that’s how, very early on, we’re introduced to her as a character.

Rating: 2 out of 5.  I was rooting for this book during the ToB simply because of its premise – but having now read it, I understand why there was so much vehement hatred towards it during that august exercise.  It isn’t a very good book.  It isn’t very well written, it doesn’t have a very interesting group of characters, and it constantly undercuts its own momentum by spinning around in circles.  And yet there are these moments of beauty – when Rose talks about food, especially when its a particularly good emotion, like the experience with the chefs at the French restaurant… those moments are wonderful.  The magical realism comes through and Bender’s otherwise mediocre prose is elevated to another place.  But that’s simply not enough to make this a book I could actually recommend – and that, of course, is the real tipping point between a 2 and a 3.