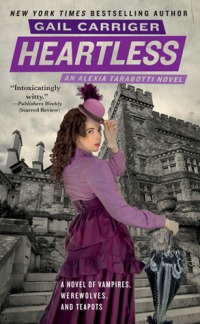 The Short Version: Alexia Tarabotti, returned to her place in society and in the Woolsey Pack, is eight months pregnant.  This does not stop the vampires from trying to kill her, someone unknown from trying to kill the queen, and life from being altogether stressful for a Lady of her sort. Then, over the course of a fateful night, the balance of supernatural power in England is shifted dramatically…

The Review:  I don’t want to say more in the summary there because, well, the book came out today!  Even though I got it at my handy-dandy local bookshop on Saturday (shhh).  Annnyway…

What a delight to see Alexia firmly back in London.  As much fun as it was to visit Scotland and Italy and see the sights with Lady Maccon, this series is at its best when it plants itself firmly in London and its environs.  Alexia, growing into her role as mujah, seems more in control (and that’s saying something) than ever before – she realizes dear Ivy has known more than she’s ever let on and even dispatches her to Scotland in her stead!  She single-handedly redefines the balance of power in England – although she does so rather on the fly.  Plus, she is always well aware of her infant-inconvenience.  Indeed, I appreciated how (relatively) realistic her actions her – she never runs in this book, often barely manages to stand, there’s a lot of waddling.  Sure, she gets bounced around more than is probably healthy and it was certainly a bit of a stretch to expect her to get so thoroughly ensconced in the action at such a late stage of her pregnancy… but this is Alexia Maccon, so one never knows.

The plot is actually rather superfluous, in a way, this time around.  There’s a rather large misdirection that was painfully obvious from quite early on but that I easily forgave – and a somewhat uncharacteristic action by a major supporting character that I couldn’t quite reconcile with her past description – but really the plot is rather mundane.  It’s about the balance of power – because Alexia’s child will, undoubtedly, change everything.  (Little do they know, amIright?!)  We see people posturing and scheming all to ensure that they come out on top – and that’s rather the fun of the novel.  Akeldama is back in full force and thank goodness.  We get unexpected and shocking revelations about Professor Lyall, Floote, and (most importantly) Alexia’s mysterious father.  Indeed, the most pleasing part of the novel may’ve been the insight we finally gained into the mysterious past of this world.  These characters are growing increasingly well-rounded and that’s just a delight.  They all feel like old friends at this point so that even when we barely see Ivy or Channing for most of the novel, we know they’re still out there doing their thing and when they drop in, it’s like they never left.  I’m unsettled by the aforementioned mood swing in one of the supporting characters – it felt a little like a plot device in order to effect the eventual Major Event – but willing to forgive it because everyone else maintains a high level of reality.

I’d love to go into the particulars of the ending, but I shan’t.  The book is simply too fresh on the shelves.  But its a hell of an ending and I really love the way it shifts everything.  I’m curious to see what’s up with the baby and how Ms. Carriger intends to wrap up this storyline in the world of the Protectorate.  There are still a lot of questions – most infuriatingly, what the hell is up with these octopus people?  The OBO is still pretty damn shady and the time for revelation is nigh.  At least, I hope it is.  March cannot come soon enough (except, you know, it can – I love autumn. But if anyone’s got a time machine…)

Rating: 4.5 out of 5.  The series just keeps getting better – a welcome return to London and incredible of-the-world developments have cemented the Parasol Protectorate universe and given it definition.  The plot device I’ve been alluding to is what keeps this book from top marks – it was just a little too much, a little too “…really?” – and Alexia herself even seems to constantly register how absolutely batty it is.  But if that’s what was necessary in order to start the shift that occurs… well, hey, I’m in.

I’m already saddened to know that the last book of the series is a short nine months from now.  I have the highest of expectations, too – but how can one be worried when we’re in such good hands as Ms. Carriger’s?