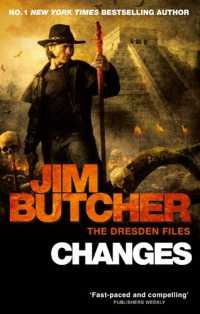 The Short Version: Harry Dresden, Chicago’s only phone-book-listed wizard, gets a phone call from his long-time ex telling him he not only has a daughter but that she’s been kidnapped by the vampires of the Red Court.  Of course this happens at the same time the Red Court decides to sue for peace.  Dresden knows something’s fishy and suddenly faces the realization of having to cross the lines he never crossed before – but you know he will, because it’s his daughter’s life on the line.

The Review: First, a tangential diatribe.  In the last Dresden Files review on this blog, I discussed the beauty of the OrbitUK paperbacks.  They must’ve been listening to me or something because, with this book, they decided to rejacket the entire series… using the same image as the American covers.  No more pretty file-folder versions – just cheesy fantasy covers.  This is beyond irritating.  Interestingly, however, my irate email to OrbitUK was actually returned with some important information (yes, I write those emails.  Does this surprise you, in any way?) – that this book marked a turning point of sorts in the series.  First of all, it’s the first book without a two-word title.  It also sees a number of radical shifts in Dresden’s life.  It is, nominally, the halfway point to the final blow-out “apocalyptic” trilogy Butcher has been promising us for some time.  So, okay – I understand the rationale behind the rejacketing.  But then, something happened in the book that actually made me rationally okay with it in a way that, well, only I could really come up with.  See, (oh, by the way: SPOILERS ABOUND after this)

Dresden’s files all get blown up.  His office gets blown up, his apartment gets blown up, all of his stuff is blown up.  So of course the books from this point on won’t have case files – because things have changed.  Yeah?

Anyway, seriously, there’s a ton of pyrotechnics in this book.  The pace moves at about the clip of a Michael Bay movie, too – there’s little time for breathing here, just enough to admire the pretty explosions and feel anxious about whether or not people will survive.  And, honestly, this is the second book in a row where you’re suddenly concerned that characters will not survive.  The last book had some death and destruction on a pretty big scale, removing a number of major antagonists (whose void was filled, of course, by even worse ones) and the Black Council had taken out a significant number of wizards.  This doesn’t even compare – Dresden destroys the entire fucking Red Court.  TAKES THEM OUT.  The big battle at Chichen Itza is the sort of thing where you rather expect people to be killed.  It’s almost a little unbelievable that none of our heroes die in the lead-up battle.  All three of the Swords are wielded, Harry’s fae grandmother comes out swinging – shit goes down.  And it is fantastic.

This is not to say that there isn’t development.  This book, though, is about the way rage develops us.  Harry, upon finding out he has a daughter – and that she is, in fact, his – and that she’s been taken, immediately devolves into that barely-rational creature we all know lurks within our finer selves.  The creature that would literally do anything and stop at nothing in order to protect its offspring.  Especially a daughter (fathers and daughters, you know?).  So Harry immediately starts pushing past his already-wide limits.  He even gets himself paralyzed from the waist down… and makes a sacrifice you’d never have imagined him willing to make in order to restore himself – he becomes the Winter Knight.  Or, at least, he apparently does.  But I’ll get to that cliffhanger in a minute.

The irrational, scary-intense Dresden we see here is actually one of the most interesting pieces of development to happen over the course of this series.  I didn’t like this entry in the series at first but that’s because (I realized later into the book) that I was genuinely upset by what was happening to Harry.  I was disturbed by it – the same way I’d be disturbed if one of my friends started acting this way.  But if it were one of my friends, I’d be there swinging right alongside him.  There are some things you just don’t mess with.

The reset button that this book pushes on, really, everything – Harry’s real-world life effectively destroyed by some crazy-nuts vampire bombers, Susan’s reappearance (and Harry dealing with that) and her death, the appearance of Maggie (Harry’s kid), the reveal (obvious to everyone but Harry) that there are a number of women very close to him who adore him (Molly C and Murphy, most importantly), the reveal that McCoy is his grandfather, Harry accepting the mantle of Winter Knight, the destruction of the Red Court completely… it’s all definitely resetting the board.  Of course, just as things seem reset – Harry gets fucking shot at the end of the book and dies.  YEP.  Dies.  At least apparently.  The next book (already read the first three chapters online) has Harry as a ghost.  So.  Don’t know how we’re getting out of this one.  But I’m just completely floored by the pace with which this series has gone from “kinda just fun” to pretty damn serious.  Impressive work in an already impressive series.

Rating: 4.5 out of 5.  An excellent novel, despite the breakneck pace and the a-little-too-quick turn on Harry’s part into ‘uber-protective father!’  The mythology of the world is spread out a bit – an interesting appearance from Odin, the All-Father (and perhaps a slight tip of the hat to Neil Gaiman… slight, slight, slight, but there) – and while there are no immediate answers to the issues like the Black Council and what the hell was going on on that island with Harry during the big battle in the last book, that’s because there wasn’t time.  This book was self-contained in the sense that there was no distracting Harry from the task at hand – and as a result, it’s a master-class in lean, efficient storytelling.  Where things go from here is anyone’s guess – I hope Butcher knows what he’s doing…