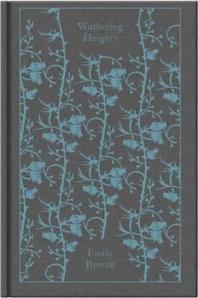 The Review: I picked up this book after all these years (another one that slipped through the 16 years of schooling…) because a girl told me that I was “a mix of Darcy and Heathcliff.”  When pressed to see what she meant, I was told that it was a dealbreaker that I hadn’t read Wuthering Heights and I’d have to follow up with her after I’d read it.  I took this to mean that I had potentially been given a backhanded compliment… and after reaching out to my female English nerd friends, I was obliquely confirmed in that context but also told “you’re nowhere near as unlikable as Heathcliff – you’re too nice.”

But seriously, regarding the characters of this novel, its as though Emily Brontë said “well, listen, if my sister can write a book where we end up caring about the characters, I can write a book where you’re going to hate everyone because they’re all thoroughly unlikable individuals.”  I found myself, at the end of the book, so happy to be quit of these characters.  I mean, I do get Heathcliff’s whole thing and why he retains such an air of attractiveness to women even in the 21st Century: he’s an asshole and women like assholes.  He’s also got that wonderful brooding thing and that’s underrated by any time period’s standards.  But, I mean, come on.  He’s a little much.

Intriguingly enough, I found the book to be a well-constructed and relatively easy read.  Often I find that novels by Austen or any of the Brontë sisters or that lot tend to bore me a bit – there’s a lag at some point, a restlessness that comes over me… and I didn’t have all that much trouble here.  The story’s construction is a little wearisome – there’s a character completely superfluous to the plot whose only purpose is to have the story told to him – but I didn’t so much mind because the story was told in a fascinating enough way.  I got some sense, around halfway through the novel, that this was one of the earliest experiments with a potentially unreliable narrator.  Lockwood himself is reliable enough – but Mrs. Dean cannot entirely be trusted, as she often mentions having her own agendas within the story and often sides very decidedly with one party or another.  This is frustrating, as I’d’ve had a row with her over her behavior during the tale just from a humanitarian point of view, but it’s also fascinating because there are aspects of the story that we never get.  Heathcliff, for all his brutality and harshness, loved Cath to the point of distraction – and there seems to be a peaceful man behind the abrasive front.  We just don’t see it all that often and when we do see it, it’s in the view of a suspicious Mrs. Dean.

This is not to start a revisionist argument or anything like that – but I’m just noting that the unreliable narrator seems to’ve started in fiction far earlier than I was aware.  I found that to be the most exciting part of the novel, to be honest.  Otherwise, this was rather ho-hum.  The story is a tragic one – lots of hearts broken, people spitefully marrying someone because they want to do harm to the one they really love who had harmed them first, sad deaths from sadness, etc etc so on and so forth.  I’m not saying anything good or bad about it, I’m just saying it was rather tragic – but in a way that didn’t exactly provoke sympathy from me for any of the characters.  Because they’re all incredibly selfish and unlikable people.  It could be argued that all human beings have some level of unlikable qualities but this group (this very incestuous group, by the way – Catherine-fille marries not one BUT TWO OF HER COUSINS… anyone? no?) seems to really take the cake.  I couldn’t bear to spend much time with any of them – although the survivors all seem to be pretty happy at the end.  That ending, though, seemed almost a little strange.  Not exactly out of place or anything – but strange in the way a sudden beam of sunlight on a previously cold and cloudy makes you feel a little uncomfortable.   You’ve put your mind into one frame and then suddenly there’s something different and you weren’t ready for it.  I actually found the very end to be wonderfully poetic, though.  A nice, pleasant touch after such hardship.

Rating: 3 out of 5.  I’m not sure that I have all that much else to say about the novel.  It was well written and a character like Heathcliff certainly deserves his place in the canon of romantic leads – but I just can’t get over the fact that no one in this novel was in any way a likable person.  At least as presented by Mrs. Dean or in Lockwood’s few encounters with the surviving protagonists.  There was a bitterness about humanity – one that I’ve often found myself, in weaker moments, giving in to – that filled each of these characters.  Were I still an English major, I might try to write a paper about Emily’s disdain for people or something like that… but thankfully I’m not, so I can just put this one on the shelf and check it off my list.  And if a girl ever equates me to Heathcliff again, I’ll know that I’ve probably been insulted (as I’m not exactly the rugged type – much more a Darcy, looks-wise [and temperament-wise, but that’s neither here nor there]) regarding my treatment of romance and/or women.