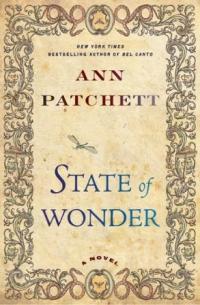 The Short Version: Marina Singh, a corporate scientist, is sent into the depths of the Amazon to track down her former professor and discover the truth of what happened to her partner, who died in the jungle under mysterious circumstances.  When she arrives from Minnesota, she finds herself in a world unlike anything she was remotely prepared for – and finds that the jungle changes everyone.

The Review: Fun bragging sidenote before we begin: I got this book the day it came out and saw Ms. Patchett read from it and give a talk at Barnes & Noble.  She signed my copy afterward and was convinced that she had met me before, to the point that she inscribed my book “lovely to see you again” even though she professed as she was signing it that she had no idea where she’d seen me before.

Right, so the book!  I adore Patchett’s writing.  I think she could very well be one of the best writers ever.  Her simple, calm prose has this almost magical power – it’s hypnotic and relaxing, yes, but there’s more to it than that.  It is… comforting.  Patchett is an author in whom I put an absolute trust.  I know that she will deliver me to the end of the novel and that I will feel satisfied at the end of it.  It may not be earth-shattering or world-changing – or it might well be.  Either way, I can safely say (three books into her canon) that she writes like no one else and I find her voice refreshing, relaxing, and soothing.  Like a mother to a small child, you might say.

The novel is certainly the most (how did one review put it…) mature she’s written.  The themes are bigger – there’s more at stake than individuals here – and there’s a level of fear that runs under the surface even in the calmest moments.  The Amazon is, perhaps, Earth’s last great uncharted territory and human beings have always had a fear of the dark, the unknown.  I found that I even struggled to imagine the deep, remote camp where Dr. Swenson and co have met the Lakashi – my mind just cannot quite comprehend the jungle as it exists.  The idea of taking a boat down a small tributary you can barely spot and then the jungle closing in on all sides of you… my mind literally has trouble computing that.  It just doesn’t make sense – the densest forest I’ve ever visited doesn’t even remotely compare.  Even the Everglades and the bayous of Louisiana pale in comparison (or so I’ve been told) and as a result I’m at a loss.

That, actually, might be the biggest shortcoming of the book – while I completely got the fish-out-of-water feeling that Marina deals with and the overwhelming other-ness of the Amazon… it was never made understandable to me.  There’s obviously an argument to be had that it cannot be understood and so Patchett would’ve done a disservice in more clearly explaining it – but I disagree.  I would’ve appreciated just a little more concrete scary grounding to the dreamy comforts of her descriptions – I thought that a book like The Ruins captured that spirit well (although in a different genre entirely).

The other quibble with the book is some of the late-stage plot twists.  I appreciated the device for what it accomplished in the story (SPOILERS COMING UP)

by getting Marina home.  Without discovering Anders, she might not have left – because Swenson was right.  So right.  She was doing well there.  She could have stayed on – and she was actually considering it, despite her protestations otherwise.  But discovering Anders meant that there was something to rip her out of the fever dream that was her jungle life.  I just, at the same time, felt like it was a little unbelievable and a little… almost otherworldly.  It was such a shock and she moved through it with her typical aplomb.  Even the scariest moments – the tense standoff with the supposed cannibals – needed a bit more tension to feel believable.  They were certainly tense – more tense than just about anything in the terrorist scenes of Bel Canto, so that’s something – but there was just something flat about that last section in the jungle.  I also sort of hated that they slept together.  I thought it was unnecessary and would undoubtedly cause more problems in the future than they’d ever actually allow.

All of this said… the final pages, Marina’s return to Minnesota, are heartliftingly beautiful.  So simple and free and beautiful that I had to read it twice, just to keep it going.  And there are passages like that throughout the book.

The issues that Patchett deals with here are fascinating for their scope.  The way the scientific process works today, the ethics of lying, the idea of never-ending fertility, a malaria vaccine, the untold promise of the places we’ve yet to colonize with white man bullshit.  Even as the Lakashi are wearing cast-off pop clothing, they’re completely isolated from the realities of ‘modern’ life.  How best to keep them that way, even as we try to discover the secrets they may hold that could save millions of lives?  Does a scientist have a higher obligation to their company or to their work?  Fascinating stuff that Patchett leaves relatively unanswered – I mean, Dr. Swenson (the Kurtz of this Heart of Darkness update, as so many reviews have tiresomely pointed out) is clearly a tyrannical egomaniac who will do whatever she wants and damn the people who expect reports or progress or, god forbid, a return on investment…. but she’s also right.  The corporation, worried about stocks and what-not, is interfering where it shouldn’t – Mr. Fox is worried about profits, not the potential amazing drug that may take longer than anyone expected… or the other drug that no one even knew they’d find.  The book makes a great case for hands-off parenting, in a way – but also argues that scientists can’t go completely native without sacrificing the integrity of their work to a broader audience.  You are left thinking about possible answers but Patchett never presumes that she knows the correct one – and so she’s happy to present it all in a well-rounded case, allowing you to carry the discussion into reality.  Were I in charge of something like Jeremy McCarter’s “Public Forum” series at The Public Theater, I’d curate a forum about this book and medical ethics – there’s a fascinating conversation to be had.

Rating: 5 out of 5.  Solidly, definitively.  It didn’t grip me like Bel Canto, but it was also more tightly constructed than any of her earlier works.  It was predictably beautiful and certainly made me think more outside of the novel than many books I’ve read recently.  Patchett continues to produce absolutely magnificent work and with this third of her novels that I’ve read, she safely joins a rarefied pantheon of writers who can (to me) truly trade on their name alone.  Whatever she writes next, I will read – and I’ll be there to say hi when she reads from it at Barnes & Noble, too.