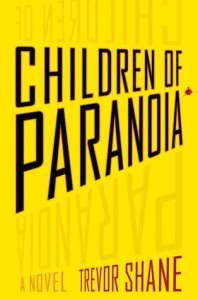 The Short Version: There is a War.  No one knows why it’s being fought anymore, except that the other side is Evil.  Joe is an assassin for the Good side – but after he falls in love with a girl and breaks one of the Rules of the War, they have to go on the run to protect their unborn child from being kidnapped and given to the Evil side.

The Review: Notice all of the Proper Nouns happening in The Short Version?  Often, they’re used for sarcasm or ironic underscoring – that’s certainly what’s happening up there – but Children of Paranoia uses these Proper Noun Ideas with the innocence of Fredric from Pirates of Penzance.  That allusion too much for you?  Let me simplify: this novel is so earnest and cliched that I’ve actually sent excerpts of the text to friends for a laugh – and been rewarded with said laughter.

An example: “‘You’d better not let him down.’ It was a toss-away line at the time.  There was no way that Jared or I could know how badly I would wind up letting Michael down.”
Or: “I’ve had enough running. Now it’s their turn.”

The writing sort of reminded me of the Bionic Woman reboot that was on NBC for a little while.  The laughably bad writing, the ridiculous plots, and Vague Attempts at creating a Shadowy Background Mystery with Shadowy Figures In Charge.  That’s this book.

The idea is an interesting one – a war being fought behind the scenes of everyday life, where anyone on the street could in fact be trying to kill you, where most of the ‘accidents’ we hear about are actually cover-ups for murders.  I dig it.  But the execution was just absolutely awful.  First of all, there’s a difference between being secretive about the background and being frustratingly obtuse.  We never find out a single thing about this “War” that’s happening except that both sides believe they’re fighting for Good.  No one knows why they’re all fighting or how it started – and the thing about these Rules is that the story is SO contrived to make sure that each one of them is broken (or nearly broken) at some point.  Seriously – it’s Goblet of Fire syndrome: you set up these rules and the minute they’ve been presented, you roll your eyes and know that they’re going to be broken somehow.  Harry must end up in the Triwizard Tournament, Joe must end up either killing an innocent or harming someone under 18 or having a baby that has to be given up… It’s just so predictable from moment one that reading this book feels a bit like a chore.  You already know what’s going to happen, so why bother getting there?

The one redeeming quality of this book – the thing that saves it from being resigned to the one-star pile of ignominy – is the really impressive writing in the fight scenes.  The fight scenes are really well written, especially when compared to the rather awful rest of the novel.  They’re lucid, fast-paced, and violent – a combination that more talented writers often struggle with.   The sequence at the Jersey Shore – from the bar into the ocean – was even (I’m being a little generous, but I’m in that mood) kind of a page-turner.  However, even these well-wrought fight scenes start to lose their luster after a while.  The final big chase (in Charleston) is boring even before it begins and I really couldn’t have cared less by that point about what was so seemingly surprising to Joe.

Also, while I’m at it, the convention of the novel – a journal ostensibly written for Maria and Christopher – is used seemingly only whenever the author remembers. Chapters might begin journal-esque (of course, why are they broken into clearly marked chapters if this is a journal?) but quickly devolve into traditional narrative The only thing that was constant was Joe’s regular address of Maria as “you” – as in “you looked at me and said” or “you understood what we had to do” or “you always had the most wonderful smile” and believe you me, that got annoying real fast.  In fact, discerning reader, there’s a good chance you rolled your eyes at my three examples – but I assure you, that’s only the tip of the iceberg.

Rating: 2 out of 5.  The fight scenes really are well handled and I appreciated the concept behind the novel.  But a few good fights and a good concept do not a good novel make.  This book feels, to put it bluntly, as though it were written after watching a few too many bad action movies/tv shows.  The last lines of the book caused such a tremendous eyeroll that I nearly rolled out of bed.  ….if a sentence like that one I just wrote is your cup of tea, perhaps read this book.  Otherwise, friends, steer well clear.  It’s the Children of Bore-anoia.