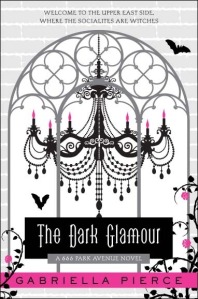 The Short Version: Jane Boyle, barely escaped from her murderous witch of a mother-in-law is conflicted.  On the one hand, she could do what her erstwhile husband suggested and go to ground – start running, never look back.  On the other, she could try to sort out her life and get things in order.  Her decision is made for her when she suddenly stumbles across the one thing Lynne Doran wants most in the world: her thought-to-be-dead daughter.  With the help of a ‘glamour’, Jane becomes Ella – and heads right back into the lion’s den.

The Review: Alright. So listen. I’ve come to the conclusion that this series… well, it’s barely even the sort of fluff I can get away with reading.  It’s, for real, the guiltiest of guilty pleasures.  And that’s because it isn’t actually entirely pleasurable.  The first book was interesting, intriguing, exciting.  The denouement was epic and I sort of loved the idea of the socialite scene actually being filled with witches.  But this book feels completely unnecessary and like a little gap book or something.  I suppose it makes some sense, seeing as it was already in production when the first book came out.  Any shifts in tack and tone that Ms. Pierce might’ve wanted to make after the verdict came in on the first book won’t really be able to hit until book three – because there’s so obviously going to be a book three. And you know what?  Despite myself… I’ll buy it.

Because here’s the thing: the parts of this book that are good?  The New York stuff.  The London stuff.  The name drops and subtle winks to our tabloid crazy culture.  It’s all really fun.  And that goes a long way – but this book was lacking so much of what made the first book an engaging if flawed entry to a new urban fantasy.  Jane feels like she hasn’t learned a damn thing from the first book – she basically bumbles around, ends up shagging some other guy (what, it isn’t cheating because she was wearing a different body at the time?  also, side note: why was there not even the slightest bit of guilt or emotion or SOMETHING from Jane about the fact that she’s technically married and boffing some other guy?  I mean, I get it, Malcolm tried to kill her but… come on.  This was a bit… loose), and then suddenly we get a whole lot of exposition at the end (although the magic diary was pretty cool) that reveals that all of this was planned out and she’s actually kind of messed everything up.  It was a bit much to handle… especially because I actively started to dislike Jane.  She was kind of an idiot, straight-up.

That said, I enjoyed the sex scenes (what, a well-written racy scene is another guilty pleasure – you can’t deny that you enjoy them too, so don’t even try it, reader) and I enjoyed the magic and I am, despite my ‘better’ judgment, curious about the plot developments at the end of the book.  The “war” that seemed to loom at the end of the first book actually seems to be here now, so that’s something.  There are more magical families in play, also something.  And there seems to be a mythology here that we’re only just starting to uncover… and that’s what’s going to bring me back.  Because as frustrating as the overwhelming dollop of exposition at the end happened to be, it was all pretty intriguing stuff.  I just wish Ms. Pierce would take some time and set up the mythology before sort of dumping us into it.  You see, it’s a bit jarring to hear little wisps and then suddenly WHAM realize that everything we’ve understood for the last two books is sorta kinda wrong.

Rating: 3 out of 5.  It wasn’t bad, not at all.  It just wasn’t really all that good, either.  It felt very much like treading water, killing time.  It was the most interminable “middle sequel” ever – because everything that happens is kinda without a point except for the way it all sets up the next sequel.  I do hope the series ends up being more than a trilogy (although, at the same time, I’m concerned that the next book might wear thin the charms of the first two) and I’ll certainly be there for book three… because, you know, even in October there’s a place for guilty pleasures.  Now if only these socialite witches were real….