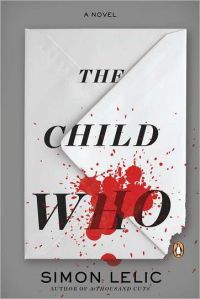 The Short Version: After a young boy murders a young girl in rather sadistic fashion, Leo Curtice ends up as his solicitor.  Not surprisingly, Curtice tries to be impartial and do what’s best for his client, even as the entire country seems to be turning against him – because what’s worse than the death of a child?  But when the case suddenly hits close to home, Leo has to ask himself what’s most important: his client and career or his family’s safety?

The Review: I first read Simon Lelic about a year and a half ago, on the recommendation of The Biblioracle.  It was an interesting first novel, a good twist on the crime genre.  I wouldn’t say I was excited to read Lelic’s next book but I was interested enough and when I won a copy from Goodreads, I was intrigued to see what he did next.  The resulting novel is simultaneously better than and worse than A Thousand Cuts, his first.

We shall start with the tone: deeply unsettling.  It’s been quite a long time since I’ve read something that made me feel so uncomfortable.  It wasn’t a gross-out, Palahniuk-style, but just a sense of unease.  Of paranoia.  I’m thinking of the first few episodes of The Killing or the ambiance of Fincher’s Se7en: that sense that something is very WRONG and it just seeps into everything and you can feel it under your skin and in your shoulder tension but you can’t put a finger on it.

The death of a child is, of course, one of the most horrible things in the universe.  Murder of a child is even worse.  But for another child to, seemingly without reason, kill and torture – because that’s what it was, torture – a contemporary?  A 12-year-old boy to bash a girl’s head in, rape her with a stick, then wrap her up and drown her in the river?  That’s deeply, deeply disturbing.  That’s laws-of-nature-overturned disturbing.  It provokes actual revulsion just thinking about it because it is so outside the realm of normality – and that’s basically what every character in this novel thinks, too.  Sure, Leo is trying to be a good guy and be impartial and all that – but honestly, I cry bullshit.  It was, plain and simple, contrived for Leo to be such a knight in shining armor by trying to play by the rules with this kid.  Sure, there are mitigating circumstances (big shock – the last minute reveals that Leo’s hunches were correct are unbelievably unsurprising) but that doesn’t change the horrendous actions.  You can’t go baying for blood but it’s an indefensible crime and, well, I just didn’t think Lelic did a good job trying to argue that a 12-year-old cannot be responsible in the same way an adult can.

He makes a good point about a third of the way through the novel when a character brings up the ‘magic line’ at which, when you turn a certain age, the state recognizes you as an adult or a grown-up or no longer a child, even if mentally you haven’t yet developed that far.  I can agree with this concept – I think it’s pretty damn arbitrary, especially in today’s world.  But at the same time, the character of Daniel never seems like anything more than a borderline psychopath.  He isn’t, as he clearly shows that he has feelings of some kind, but I grew up with kids like him.  We all did.  There’s something to be said for the belief that a bad egg isn’t going to get much better – and could in fact get worse.  It’s a scary thought and not a popular opinion to voice aloud but we all believe it.  I had a friend prone to aggression and competitiveness in grade school who later tried to stab a guy.  There are logical progressions to these things and while it’s nice to see that Leo believes in the good of humanity, he’s also quite simply being unrealistic about it.

Also unrealistic: the big plot twist that’s awkwardly telegraphed from the beginning with these flashforwards from Megan’s point of view.  It’s pretty clear that something’s going to happen to their daughter – but it’s also pretty clear that it isn’t what Lelic wants to distract you into believing happens.  This was my big problem: I never, for a second, believed any of what I was being shown.  Leo wasn’t a believable character and the plot twist with Ellie was quite clearly NOT what we were being shown.  The ending resolution was not only not surprising, it was borderline regrettable in its obviousness.  It also dilutes the focus of the whole novel.  We start out with a searing look at the way we treat juvenile offenders and the reality-bending horror that is the murder of a child – but it just degenerates into a mediocre Law & Order episode.  Or, come to think of it, The Killing.

Rating: 2.5 out of 5.  The only reason this novel gets even something close to middle marks is Lelic’s way of evoking real discomfort in the first third of the novel.  I was deeply, deeply unsettled while I was reading – and that’s impressive.  But the payoff – or lack thereof – is so disappointing that the novel just looks, retrospectively, hackneyed and obvious.  The promise of that unsettling feeling fades away into just not caring, about any of it.  I still believe Lelic to be an interesting addition to the crime genre but he’s yet to translate that promise into anything actually worthy of praise.  Instead, you mostly get disappointment.