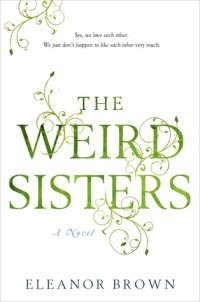 The Short Version: Sisters Rosalind, Bianca, and Cordelia Andreas have found themselves a bit adrift in life – lost, confused, stagnant – and so they all return home after their mother is diagnosed with breast cancer.  Along with their Shakespeare professor father, they chart the murky waters of a sick parent and unmoored lives.

The Review: When you try to summarize this book in short order, it sounds rather flat and clichéd, doesn’t it?  Ohhh, family tragedy forces crazy siblings to grow up, how original.  And yet, this book is rather original.  The most striking thing – and the thing that’ll either turn you off on the first page or become your defining memory of the novel – is the voice: first-person plural.  Much like the still-memorable Then We Came to the End, the “we” is impossibly powerful as you start the book.  “We came home because we were failures” begins the novel and, well, that just grabbed me right there.  That use of the plural narrator is a fascinating and tricky thing to pull off but Ms. Brown does it.  She’s successful at it mainly because she doesn’t force it.  The narration slips between first-person plural and third-person omniscient with ease and so we might be following one of the sisters on a various misadventure but then “we thought X” will pop in and thus we’re treated to a delightful sense of that mostly-impossible-to-describe sibling bond.  Anyone who has siblings knows what I mean: that way to jointly communicate about something, to pass judgment on something, to understand something.  It’s a marvelous and not entirely explicable thing – but it does exist and Brown captures it between these three girls here.

But let’s move beyond the innovative (well, maybe not innovative – but refreshingly underused) writing style and to the meat of the matter: the book itself.  The story, as I’ve expressed, isn’t anything groundbreaking – it’s rather simple and mostly pretty predictable.  You can see it in most traditional novels about families, especially (sorry if this offends anyone but I’m just speaking truth) those written by/about women.  Quick breakdown of the three sisters, you tell me there isn’t a bit of a cliché wrapped up in this whole thing: Rosalind is the oldest, the most controlling, the one who stayed home to take care of her family and feels bitter about it; Bianca has middle child syndrome, believing that her bookending sisters took all the love and so she goes to NYC and goes crazy and does self-destructive things for attention; Cordelia is the princess who can do no wrong, even when she comes home pregnant after years of drifting about the country.  See what I mean?

And while I’m wired to roll my eyes at this sort of thing – I’m sorry, I don’t like Fried Green Tomatoes either – I found myself strangely captivated by this family.  Perhaps it’s because their father is a distinguished Shakespeare scholar who liberally quotes from the Bard.  Perhaps it’s because they’re all nerds, constantly in a book or many books or performing or something like that.  Maybe it was just the sheer fact of right book, right time.  But I was charmed from about page 7, as I watched these sisters begin their paths towards each other and home.

I also found the exploration of family dynamics done in an insightful way, overall.  There’s a lot of mystery in the way human being interact, especially those related by blood.  A quiet moment where Bean (I think) remembers seeing her parents at the sink, her father standing behind her mother and laughing about something as he cupped her breasts – that feeling of seeing something we shouldn’t see but also that realization that our parents are people outside of their relationship to us, that they were people LONG BEFORE we were even beginning to be contemplated.  It’s a strange thing to think about, you know?  And this book captures it so well.  That sense of seeing a parent no longer as invincible but as fragile as we are is a terrible thing – those hands that soothed us, held us up, bandaged our wounds, turn old and suddenly it’s our hands doing the same things for them.  It’s a stunning and terrifying – and unalterable, unavoidable – shift in your mental landscape… and that’s what this book is all about, really.  It’s about three girls who hadn’t yet had to grow up realizing that indeed they must.

Now, I fight against ‘growing up’ as much as the next person – I’m happy to be an adult but I’ll never quite ‘grow up’, as it were…  but also, there’s something to consider about the way we inevitably must.  No matter how we try.  And these girls do too – affairs, pregnancy, fights, etc.  But none of it feels remotely surprising in the way it goes down.  You can predict the ending of each sister’s story because this is how these stories must end.  And perhaps that’s a lesson in and of itself: our stories do, for the most part, end if not happy at least well.

Rating: 4.5 out of 5.  A sun-drenched summer tale of family and growing up as adults. It’s nothing revelatory – except for the marvelous plural voice – and is probably a bit too nerdy (there are a LOT of Shakespeare quotes throughout the text) for the average reader.  But the feeling of reading this book was like sitting on a porch swing with some lemonade on a summer Sunday afternoon.  A clean and simple experience, elevating the rather mundane subject matter to something more than the sum of its parts.