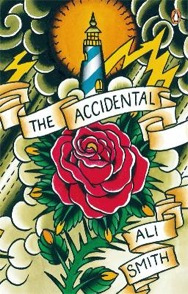 The Short Version: A charming woman bluffs her way into the house of a rather ordinary English family during their summer vacation in Norfolk.  What starts off innocuous becomes life-altering for all of them and leaves none of them the person they were before the summer began.

The Review: What a fucking waste.

Sorry.  I’m actually not all that angry at this book.  I’m more annoyed.  Not frustrated – frustration isn’t a bad thing in literature, not necessarily – but just annoyed.  I think I’m safely in the camp of people who simply do not ‘get’ why this book was such a big deal in 2006.

It’s inventive and quirky, sure.  I dig that.  I dig a book that has an entire section written in poem form – not just one form, either, but many.  I dig a non-linear, multi-narrator novel.  And the plot of this book – or at least the way it is described by anyone who attempts to summarize it – sounds awesome.  What I expected when I read the summary: crazy 30-something Amber shows up at this quaint cottage in Norfolk, squirms her way into the family, and then reveals them all for just how messed up they are – and then, like Mary Poppins or Nanny McPhee, she leaves without a trace.  OR she kills them, I wasn’t too sure.  But that’s sort of what I was expecting: something more psychologically interesting, with higher stakes and people I cared about.

Instead, I got this.  There are ‘plots’, I suppose, for each character: Astrid is growing up and no longer a child, Magnus is guilt-ridden over the death he indirectly caused, Eve is struggling with minor notoriety and writer’s block, and Michael is a middle-aged academic who keeps fucking his students.  Lots of dramatic potential here.  Too bad it’s mostly ignored in favor of mundanities and Cool Authorial Quirks! Sure, Amber gets sexual with at least one member of the family unit.  Wasn’t really surprising to me and in fact my favorite moment of the book comes when the family member in question says something about how this happens in movies but not real life and WOW it was happening to them!  I’ve never been in a situation like this but I often have the feeling that my life is more movie than reality, so I enjoyed that single solitary moment.

Otherwise, I was pretty bothered by all of these people.  First off, how are they so fucking stupid that they just let Amber in?  It’s not the 1960s, its 2003.  The Iraq war, mentioned way too often for my taste, is raging.  It’s so ridiculously unlikely that a total stranger would show up and the two adults in the picture would be so blind as to just invite her in because they believe the other one invited her.  Suspension of disbelief is one thing – this requires something else.

Then, moving on, I was just bored by how predictable these characters were in their unlikeability.  Sure, Astrid is precocious and cute and it’s not like there aren’t 7 million precocious cute 12-year-olds in English literature.  It all just felt so uninspired – as though the writing the novel in a strange way was the point, making up for the fact that there was absolutely no substance.  A pig in a dress is still a pig.

Rating: 1 out of 5.  Similarly to Netherland, I just could NOT wait for this book to be over.  I was annoyed by it.  It was, quite simply, not for me.  It didn’t make me irrationally angry like some books I won’t say by name… it was just such a waste of my time that I can’t even accept the formal inventiveness of the writing.  How this book ever won The Rooster is beyond me.  It felt more like an exercise than a proper novel.