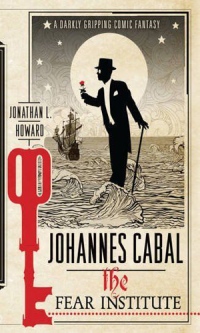 The Short Version: Necromancer of some little repute, Johannes Cabal, is approached by The Fear Institute to lead an expedition into The Dreamlands – yes, that place of dreamers and poets and Lovecraftian monsters who’ll send your mind into broken little pieces that cower in the corner and your family will ask the men in white coats to up your dosage.  Their goal is to find the “Phobic Animus” – the manifestation of irrational fear – and destroy it.  But nothing is what it seems in a world that is based on the rules of dreams and Cabal finds himself facing an opponent who may truly be beyond his power to defeat….

The Review: Jonathan Howard has created a fantastic character in Johannes Cabal.  He was fully formed from the first time he splashed across the page in Johannes Cabal: The Necromancer – and across my literary career, in Union Square Park in October of two years ago.  Since then, Howard has provided a perfect early autumnal read with each successive Cabal novel.  I was concerned, then, when it appeared that this third book wouldn’t be published in the US.  Would I be able to ply my English contacts in time?

Naturally, it was about the first thing I did upon arriving in London to ensure that I would find a copy.  And on the steps of St. Paul’s Cathedral under a gray sky and a cool breeze, I was pleased to slip back into the old house in the middle of the country where Cabal makes his home.  I have to admit, I’m not entirely up to speed on my Lovecraft, so I was a little concerned that I wouldn’t be able to roll with the direct allusions – but it seems as though my grounding in the basic stories as well as my general familiarity with those who’ve been inspired by the man (see: The Dresden Files, Hellboy, the works of Neil Gaiman or Terry Pratchett or Stephen King, etcetcetc) was enough to stand me in good stead.

I was delighted to see a (brief) visit to Massachusetts – and I found Cabal (and company)’s droll English observations on America to be hilarious.  But the star of the novel is not anything we’re yet familiar with re: the Cabalverse.  The large majority of the novel is set in the Dreamlands and there we see a new side of… well, everything.  Nothing is rational and even Cabal, rational to the hilt and fully aware of this gap between logic and what-we-understand-as-‘reality’, has trouble keeping up at times.  It’s clear by the end of the novel that he’s been a little more aware than Howard lets on to the reader, but the result is that it’s actually quite a ripping adventure.  You genuinely have no idea what’s going to happen next… because it could be anything.

I mean, the black ships of the slavers that the expedition encounter turn out to be crewed by strange Moon frog alien things.  Like…. what?  At the same time, I think Howard does an excellent job at not pushing the reader to far beyond the pale.  There’s an issue if you try to encapsulate the limitless bounds of imagination or a world based on the unbounded limits thereof: you simply can’t do it rationally.  You can just make something up, of course – something ridiculous about bee people and eating green and curtain rods, let’s say – but it’ll come off as attempting to be as weird as can be!  Instead, Howard allows basic rules of the world he’s playing in to hew close enough to our own… with just a few mentions to the real crazy shit thrown in for good measure.  I mean, even Lovecraft knew it: you can say that a god has a thousand faces and is bubbles all around us – but when you try to show that, you’re going to hit a comprehension issue pretty fast.

If the quest – to find and destroy the Phobic Animus – feels from the get-go like a MacGuffin, you have to realize that it is.  Cabal himself states that they can’t be sure it actually even exists, so there’s a worry that this whole thing is just an excuse to gallivant through the playground of Lovecraftian creation.  But Cabal’s continued insistence that he’s not really there for the Animus stops it from being an annoying MacGuffin. Instead, we see our man just taking notes and trying to understand the place.  He’s fully intending to use these saps who hired him as cannon fodder if need be and although we see a far more human Cabal than we first met in The Necromancer, he’s not above killing to get what he needs.  Indeed, in a virtuosic and harrowing….. let’s call it an alternate ending, Howard shows just how one-track-minded and how ruthless Cabal can be.  And it is horrifying and gripping all at once.

In the end, the novel comes down to just that: its ending.  When the big reveal comes off, it’s brilliant – because it was pretty much completely unexpected.  I had started to pick up on a few things that weren’t quite right just moments before the reveal itself… but even then, I was totally surprised.  And to see Cabal not only call down that kind of attention but to watch it all as a game between Cabal and, for once, an adversary he cannot beat… it’s pretty freaking fantastic.  There is so much more to do with Cabal and I hope Howard intends to keep the stories coming.  Judging from the truly cliff-hanging ending (and I think faithful readers can all assume who the individual Cabal questions is), I have to imagine there’ll be at least a few more tales yet.

Rating: 4.5 out of 5.  It’s definitely the best Cabal novel yet.  There were times when the adventuring felt like adventuring for adventure’s sake – much like each novel thus far has sort of had an element of pastiche – but they were few and far between.  The whole thing is just as witty and enjoyable as its predecessors and I liked seeing Howard able to let loose and imagine a bit.  It was a lovely way to kick off my fall (September 1st by my count, people) and I hope there’ll be another one next year (although I think I might’ve caught up to the man’s writing speed…)!