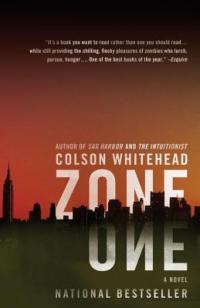 The Short Version: After the zombie apocalypse winds down, the survivors begin to regroup and reestablish some semblance of society.  The first great task is the reclamation of Manhattan, from the bottom up.  It begins in Zone One, extending from the tip of the island to Canal Street – and that’s where Mark Spitz (not his real name) works as a sweeper, moving through the abandoned buildings one by one to clear out any random remaining skels.  He had always wanted to live in New York…

The Review: I have an uncle who used to live on 13th Street.  It was a sort of mythic thing, in many ways.  I grew up getting to visit his apartment on rare occasions or seeing him appear at holiday events with a cool new gadget or hot new girlfriend.  His life seemed like something that was inherently unknowable to a boy from the suburbs.  But eventually I moved to the city – into that very apartment, for a while – and I realized that New York was always where I’d wanted to be.

I bring this up because the main character of Zone One (unnamed, although given the nickname Mark Spitz early on – and referred to as such throughout the entirety) recounts a similar story at the beginning of the novel.  If the world ends, it makes sense that the afterparty (or the cleanup) would happen here.

It’s actually somewhat strange to me that I’ve not yet read any Colson Whitehead.  I read his sharp, vaguely maudlin, and funny Twitter account regularly (@colsonwhitehead – well worth the follow) and I saw him speak on a New Yorker Festival panel with Karen Russell and Gary Shteyngart last autumn – but my intention to work through some of his work this summer was sadly unrealized… for no real reason.  But, seeing as it’s now October, some zombies seemed logical.

Of course, this is no ordinary zombie novel.  I feel a little bad, joining the chorus of people who talk about the dichotomy between “genre” and “literary” fiction and what happens when a “literary” author “stoops” to “genre”.  I’m using air quotes (if you could see me, I’m actually doing the air quote fingers) because I am bothered by these terms and use them loosely – but anyway, that’s a-whole-nother digression.  Anyway: my contribution is that this is the zombie novel to end all zombie novels.  It is the nadir.  The zombie is the 21st Century’s (or at least my generation’s) great fear: China, overpopulation, drug-resistant disease, general distrust of our neighbors… it’s all wrapped up in a neat little package.  But where the other Great Zombie Artwork, Shaun of the Dead, was a send-up of the zombie convention, Zone One is a philosophical exploration of what zombies would mean for the human race philosophically.

If that sentence bothers you, I’ll spare you the rest of this review: this book is not for you.  But if you’re even remotely intrigued – and I promise you, I’m genuinely not hyperbolizing here – then give this book a shot.  After all, if there was ever a mind who could make zombies serious, I think it’s obvious that it’d be Colson.  And I’m saying that from having heard him speak once and from laughing at his Twitter.  And this book just proves my point.

It’s an eliptic novel, sometimes shooting out into a tangent about the past before slingshotting back through the present.  We see a few glimpses of what the world was like now, a few glimpses of the world on “Last Night” – everyone has their own story of when things finally all went to hell, told in different versions depending on the audience; and then stories about Mark Spitz’s life between Last Night and the present.  The typical running & hiding stories, the farmhouse story, the story of how he got that nickname.  We always see those stories when we read/see/hear about zombies.  But Whitehead pushes further into the future and raises the excellent question of how do we readjust?  It comes up often during the long weekend that comprises the present tense action of the novel, but it’s a question that’s worth raising often.  Because whatever apocalypse is coming (and one almost certainly is, we all feel that)… what will we be like after it passes?  This book raises huge questions about human nature, about the things we believe are important.  All of that stuff – and it’s done so skillfully that you barely even notice.  Or at least I didn’t – although that may be because I’m not un-used to reading text with philosophy stuffed in.

This is not to say that there aren’t plenty of zombie action bits.  From an opening sequence where Mark Spitz is attacked in an office while daydreaming a bit to the flashbacks to Last Night to two truly harrowing memories of events on a bridge and in a subway tunnel, there’s plenty of zombie action.  Brains and blood flow freely.  Colson seems like he’s maybe a bit of a nerd, like so many other authors of his age bracket, so there’s a lot of research involved.  You know he’s watched all of the various films that would be considered required viewing and he’s watched them like seventeen times.  But the interesting thing is that this is a zombie novel that… isn’t about zombies.  A recurring image is ash, drifting down all over the city.  Obviously, this harkens back to September 11th but it’s also (as Whitehead points out in the novel) a trope of other apocalypses, particularly nuclear.  But it’s also, maybe, not real – PASD, the mutated form of PTSD, has afflicted all of our characters and this is part of Mark Spitz’s particular disorder.

There’ve been a lot of complaints lobbed at this novel about a lack of plot.  I’ll address that now, to wrap up.  The plot, as it is, isn’t all that much: it’s just another weekend in the life of sweepers in Zone One.  Of course, it’s so much more than just another weekend and that becomes increasingly obvious as the pages dwindle.  But that loose plot is only a framework for the opportunity to get an up-close view of life after the end.  It’s so apropos that the turning point is called “Last Night” – because this book is all about what happens the morning after the last night.

Rating: 5+ out of 5.  I can’t say a bad thing about this book.  It’s funny, it’s insightful, it’s smart, it’s fast, and it is one of the best damn New York novels I’ve read in a long time – up there with A Visit From The Goon Squad and Chronic City in terms of mental impact – but most importantly it struck a deep and resonant chord.  When is a zombie novel not a zombie novel?  When it’s this novel.  Come for the blood and brains, stay for the deep and slightly sad philosophical musings.  I promise you, it’s well worth it.