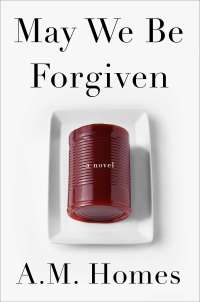 The Short Version: After his brother’s wife kisses him at Thanksgiving, Harold Silver’s whole existence gets thoroughly shaken up.  In the course of 365 days, his life – and the lives of his brother, sister-in-law, niece & nephew, and many others – change irrevocably and when the survivors come back together for Thanksgiving one year later, there is much to be thankful for – and much to ask for forgiveness from.

The Review: So it seems as though my October reading traditions are solidifying.  I read October Country books and then, in the midst, I read a big book of autumnal literary fiction.  Last year, The Art of Fielding.  This year, on the advice of the always-spot-on Biblioracle, May We Be Forgiven.  I’ll say off the bat that I don’t know A.M. Homes and I knew nothing about this book coming into it.  So I had the delightful experience (which is why I come back to the Biblioracle again and again) of jumping into a book with zero preconceptions other than a “you’re the perfect reader for this book” in the recommendation.

I think “jumping in” is an unusually accurate term for this book.  Homes dispatches, in the first… forty or fifty pages enough action to sustain an entire book by another novelist.  You sort of think you know what you’re in for: the brother’s wife kisses our main character impulsively at Thanksgiving… and he starts to pine for her.  Hijinks ensue!  But there’s quickly a course correction: George, the brother, crashes his car and kills two people.  He’s in the hospital when Harold and Jane (the wife) consumate their relationship.  And you, the reader, think “oh, okay, it’s going to be THIS kind of novel.”  But there’s quickly another course correction (sensing a theme?) and SLIGHT SPOILER (but really it’s within the first forty or so pages, so we’re not talking game changers) George breaks out of the hospital and shows up at his house and bashes Jane’s skull in with a lamp while she and Harold are asleep together.  So she dies and George is locked in an aslyum and we are off to the races.  It is no longer entirely certain what kind of book this is going to be so you just have to let it happen.

Not that this is a bad thing.  It’s just that this book is packed full of more plot than three or four comparable novels.  The book’s siblings are novels like This Is Where I Leave You and so on… but it’s like this sister needed to be the overachieving one who was on every sports team, in every play, did all of the extracurriculars, and still made Honor Roll.  I mean, there’s a whole subplot (theme?) about Nixon that would sustain several other novels, not just one, and it gets rather shoehorned in here.  Genuinely, I think a firmer editorial hand might’ve been able to trim this novel into something a little less schizophrenic.  But I don’t think that’s the point.  This novel could be flattened and turned into something that sits comfortably on the Barnes & Noble “Books We Love” table, right next to Jonathan Tropper and Amy Sohn – and that wouldn’t be a bad thing!  But the book as it exists here, in all of its nearly unmanageable excess, is something more than those books could ever be.  I’m not trying to disparage those books and I’m not saying that this book is better for its excess – it is just simply a feat that feels superlative in the genre subset.

If I had to pin down what this book was ‘saying’ with all of its sprawling crazy plots… it feels like a truly 21st Century novel.  The opening moments, with the obnoxious kids on their phones at the Thanksgiving dinner table, felt perhaps a little too on the nose but then I realized in the bookending Thanksgiving image – of everyone engaged, this strange sprawling odd “family” connected not necessarily by blood but by bond – that that was the point.  The ridiculous tribulations that our characters go through lead us to a single point: that we need to find ways to connect.  And that perhaps our families aren’t the most logical people to connect with.  Harold proves to be a far better father than George – despite the fact that he’s wildly unprepared and totally out of his depth.  And the slightly wacky aunt, providing background commentary about the odd family portrait, just proves the point: family is what you make of it, especially in this 21st Century world.

That said, the more I consider the book, the more I consider how truly and totally freaking crazy it was.  I mean, geez.  The propulsion on this thing is enough to send a man to Mars and it doesn’t ever let up.  It’s kind of exhausting, to be honest.  I found myself, a few times, wanting it to slow down and cool off.  I mean, I feel like there isn’t a “suburbia in the 21st Century” trope that isn’t at least touched upon.  Technology, online dating, porn, the sex lives of married people (and everything THAT encompasses…), home construction, raising children, foster children, fast food vs. homemade food, boarding school, sexual maturity / growing up, caring for eldery parents, abandoning parents, prescription drugs, interracial marriage, homosexuality, suburban police, college (for students and profs), charity, travel, sanity, Richard Milhouse Nixon, China, the decline of the American Century…. am I missing anything?  Probably.  And the thing is, it’s not that all of those things are touched upon but rather that they are given serious devoted thought and consideration.  See what I mean when I say the book is packed?

But it’s also funny and very human.  The mess, as over-the-top as it was, felt so very human.  It didn’t feel like a human life squished into narrative constraints but instead a narrative trying to encompass all of the myriad emotions and experiences that make our lives as crazy as they are.  How often do you say “god, this would make a great book/tv show/movie” when something crazy happens in your life?  And while we all have quiet years (some of us have fewer quiet years than others, I’ll admit), we often have a whole lot more going on than we might realize.  So the biggest success of this book is capturing what it means to be a human when you’re having a really rough, crazy year.

Rating: 4.5 out of 5.  I thoroughly enjoyed the novel, on the whole.  I thought it was overstuffed and all over the place… but that the sum of the parts was something truly meaningful.  The combination of all the crazy bits made for something marvelous, something that transcended its circumstances.  John, if you’re reading this, I’m genuinely curious to hear what you thought as well – seeing as you recommended it to me before you finished, I’m curious about your thoughts after having finished.  And to the rest of you, as October speeds along towards its end and Thanksgiving looms up large… be thankful for the families you’ve got (blood and otherwise), quirks and warts and all.