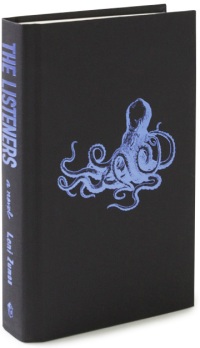 The Short Version: Quinn, a former punk rocker now facing a midlife arrested development, tries to keep her life some form of stable.  She’s maybe got an eating disorder, definitely some obsessive-compulsive issues, and unresolved trauma from two past incidents involving death/dismemberment.

The Review: Huh.  Well.  That was not, remotely, what I was expecting.  Not even close.  I had this book slotted into my October schedule because, well, it seemed like (from the jacket copy) it would have a vaguely creepy aspect to it.  The opening paragraph, which recounts a convenience store clerk with two thumbs on his left hand, implies that we’re in for some creepy macabre stuff.  Instead, what we get is a cross between Kate Zambreno’s Green Girl and Dana Spiotta’s Stone Arabia.  As a result, I can’t in good conscience include this book in The October Country.  But that’s really for my own classification anyway.

The book flies by, I will say that.  Part of this is likely due to the typesetting: the lines don’t extend to the edge of the page in any direction, it’s a moderately well spaced font, etc etc.  But also, the chapters are short – none lasting more than a few pages – and as a result the whole novel can be digested even before you realize you’ve done so.  You’ll keep waiting for something to happen and then suddenly you find that the book is over.  It’s one of those novels.

Our protagonist, Quinn, was once a singer in a punk band in the early 90s.  You know the type.  They were on their way to implosion when an accident occurred driving to the next gig, maiming their drummer and hastening the breakup of the band.  Flashback even earlier to when Quinn’s younger sister died in the night due to a freak accident involving a robbery at her neighbor’s house.  In both circumstances, Quinn had switched places with the other person and it haunts her.  Subconsciously, but it does.  It’s all kind of Psych 101 type stuff and the end of the book, when she meets with Cam (the drummer) and imagines a videogame involving her sister, brings it home just in case you hadn’t deciphered it on your own around page 45.

I mostly got the sense, while reading, that this book did not know what it wanted to be.  There are few things spookier than a deteriorating mind, for sure, and for a while it seems like that’s the route the novel wants to take.  Quinn imagines a giant rat living in the walls of her apartment and that, among other things, seems likely to drive her mad.  But then it never does.  It just sort of fades out, washes away.

Mostly, I just found this book to be light.  The experience of reading it was is best likened to water rolling off a Rain-X’d windshield.  I had a general, vague sense of what the characters looked like and what their surroundings were – but I never had enough time to develop any clear images.  Nor, do I think, was I supposed to.  Like the Zambreno novel, we’re treated to the unreliable narration of an actually-pretty-average narrator.  She’s nothing special, despite having had a wildly popular punk hit and so we find her trying to make things better for herself in her own mind.  She’s one of the multitude living a life of quiet desperation and I genuinely don’t believe anything changes for her in the course of the novel.

Even the ending, where the family gathers 20 years after the younger sister’s death and the two remaining kids decide to bring it up and there’s a moment of family bonding… it’s not a positive ending.  It’s not a negative one either, I’d say.  It’s just neutral.  The whole book feels stuck in neutral.

Rating: 2.5 out of 5.  If it weren’t for the gorgeous limited edition hardcover (thanks, Powells Indiespensable!), I might even knock this down to 2.  It just felt like a relative waste of time and energy and paper, but not in a negative way.  A story that goes nowhere is the most irritating kind of story.  I’m not saying you need a plot, per se – but if the cumulative result of nearly 350 pages is me wanting to shake my head and toss off the remaining droplets of water that were lingering there… how can you qualify that as anything good?  Perhaps some people do and I leave it to them to enjoy this kind of novel.  For me, it was utterly forgettable.