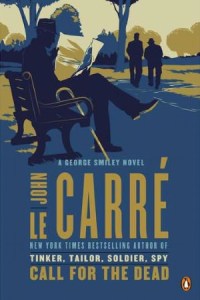 The Short Version: After a routine interview with George Smiley, a Foreign Office civil servant apparently kills himself.  When Smiley visits his widow for a follow-up, an unexpected phone call sets off a chain of events that will lead Smiley to uncover that Samuel Fennan – and his wife – were far more covert than they seem.  As members of the spy ring start to drop, it’s up to Smiley to find the ringleader before it’s too late.

The Review: It felt fitting yesterday afternoon that I should have this book slipped comfortably into my jacket pocket as I settled into a seat at the movie theater to see Skyfall.  After all, there are two types of Cold War spies: Bond and Smiley.  But where Bond has always (and I do mean always) been better on the screen than on the page, Smiley is a uniquely literary hero.  Sure, the movies have been fine – Alec Guinness’ performance was truly excellent – and the BBC radio dramas with Simon Russell Beale were splendid as well.  But it’s all about the writing here, the creation of a true-to-life Cold War spook.

But this is the gentleman’s first novel.  One can’t expect too much, especially considering how terrific – how iconic – the later novels are.  I admittedly started my reading of the le Carré ouvre backwards, when I picked up his most recent (although thankfully not his last!) novel several years ago and started there.  Then, I’ve been at the whims of the Penguin republishing schedule.  The Karla Trilogy came first, and then they went to the next most famous novel and now, from what I can tell, they’re moving somewhat chronologically.  With the Smiley novels, anyway.  The other novels have all been in the reprint process as well but I’ve promised myself I won’t tackle those until after I finish with George.

We’re introduced to George Smiley here, quite literally.  The first chapter is effectively just a “hello, meet George” that sets up our hero and his backstory.  Ann, his capricious (ex-)wife is mentioned as is his history in the service – a history that, if I remember correctly from the later novels, is changed in order to keep him from aging out of the Cold War storyline.  Peter Guillam shows up in this novel as well, more a contemporary of Smiley’s this time around than a younger associate – but his personality is much the same.   But, see, I’m already familiar with these figures.  I have an image of them in my mind – and I have a sense of how le Carré writes.  So I can’t objectively look at this novel for what it must’ve been upon its publication.

The thing that still, after several novels, strikes me about le Carré is the lack of fat.  I was so struck by the way that Our Kind of Traitor ended – so abrupt! and yet what else was there to say? – and I am still, quite honestly, struck by that precision of writing.  This novel, for example, is not even 160 pages.  It was written by a first-time novelist.  So whoever would’ve expected something so crisp and clean?  I genuinely wonder what it would’ve been like to read this as my first le Carré novel – with no expectations about his abilities as a writer.  I know I would’ve been impressed, probably even moreso than I am now.

le Carré’s writing benefits from his then-day-job at MI-6.  He’s able to write about things with an insider’s ear, which makes the reader feel like they’re in on a secret.  At times, it’s almost too inside: there were moments when Smiley and his team were discussing the case and I found my head, admittedly, swimming a little.  The jargon and the rapport between the men was something juuuuuuust slightly more insular than I was able to grasp on my first pass.  I had to re-read a few paragraphs now and then, just to really internalize and decipher the web of information here.  Of course, I had that problem with the other novels as well and I think it’s not so much a problem as just the sign of a truly gifted writer: this writing demands your fullest attention and even then, you’re going to probably need to go above and beyond.  Sounds much like what’s required of an actual spy, doesn’t it?

I should, I suppose, speak about the plot briefly (since I’ve spent most of this review chattering about the writing and le Carré’s work in general).  It’s a relatively simple one, although fascinating to me because it just doesn’t make sense in a modern context: Smiley, on a routine security check interview, apparently so spooks a civil service operative that he kills himself that night – because he was a double agent.  It turns out later SPOILERS SPOILERS SPOILERS that he was, in fact, sort of an agent… but he didn’t kill himself, he was killed.  Smiley senses something off and ends up nearly getting killed himself.  It all comes to a head in rather dramatic fashion, of course, and then is tidied up rather swiftly – as though the papers were tapped on the desk, then stuck carefully into a folder and slid into a cabinet somewhere.

Rating: 4 out of 5.  That’s the feeling, at the end of a le Carré novel – the feeling of a mission completed, a file closed.  It’s a series of novels (this Smiley series) but, really, even the trilogy was three separate mission that just happened to have the same main character and nemesis.  Right now, we’re faced with nothing more than the task at hand when we pick up any given le Carré novel and I, for one, really like that.  The mission having been completed, I can safely slide the book onto a shelf and feel as though, yes, the forces of good – or at least the forces of the lesser evil (being the West) won again.  Of course, that raises all sorts of questions too, doesn’t it….