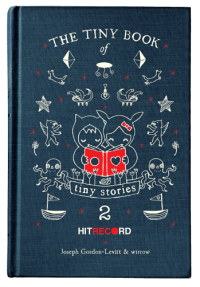 The Short Version: The universe isn’t made of atoms, it’s made of [tiny] stories.  The second (and expanded) volume of hitRECord Tiny Stories, curated by wirrow and RegularJOE.

The Review: It’s interesting to look at the development of the Tiny Books over the first three incarnations.  Where the 2010 book was very much a trial run and Vol. 1 was a more substantial but still test-esque collection, this book right off the bat feels like something far more established.  For one thing, it’s bigger – featuring more stories than Vol. 1 – but it also just feels even more lovingly crafted.  The hitRECord logo on the back bumps out and the tactile experience of the book is just more solid than in previous incarnations.  So right off the bat, there’s some weight here.

The stories, of course, are rather up to the vagaries of submissions and I’ll be curious in several years to look back and try to chart the millenial mood as represented in these stories.  There’s a dark cloud over a lot of the entries in Vol. 2 – not a depressing one, per se, but just a dark cloud.  Even the cover – a deep, lovely blue with hints of red – feels a little cooler and more uncertain than the previous red cover.  There’s a lot to be said for design when you know that the design was deeply considered, so I can’t imagine there wasn’t some even-subconscious thought that went into this.

But back to the stories!  They’re all, uniformly, lovely – which is to be expected.  wirrow and JGL have really done a wonderful job curating this series.  The same, I suppose, can be said for the various and sundry authors and illustrators who’ve contributed on the site.  It’s remarkable, especially, to see the stories and artwork that weren’t created by the same person – it’s quite cool to see two minds combine to create something on this small scale.  Sometimes it works brilliantly and other times it feels a little forced, but it never doesn’t work.  Again, quite a testament to the community created by JGL and the folks at hitRECord.

I want to go back, though, to briefly discussing the sense of darkness that seems to hover about this entry in the series.  Perhaps it’s the encroaching winter or something else entirely, but I found that the collection fit my mood as I was reading it.  Certain stories popped out to me – and certain others faded into the background rather quickly.  It was the following story, I think, that grabbed me most – and attracted me most strongly:

There’s something darkly autumnal and also somewhat worried-about-the-world in this collection.  It’s gorgeous in it’s somberness – and perhaps all the more affecting for it.

Rating: 5 out of 5.  Another smashing collection – I look forward to many, many more years of this series.  These tiny stories do make the world go ’round.