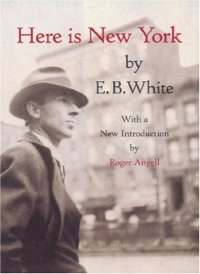 The Short Version: E.B. White’s classic stroll through New York City at the end of the 1940s, reflecting on this marvelous metropolis.

What’s most fascinating about the book is how, some 65 years later, it still speaks to New Yorkers quite clearly.  There’s a moment where White talks about how the city is changing, how the city is not remotely like the city of 20 years prior.  Isn’t that the truth today?  My uncle, resident of the East Village from 1981 to 2012, has always said that he’s been there for three iterations: the crackheads, the yuppies, and the college kids – and that he liked the crackheads best, as they didn’t bother anybody or ruin anything.  But for me, I don’t know New York before the late 90s.  And even then, I really only know it over the last five or so years, when I started to come visit by myself.  But, hell, I can see the changes too.  Cafe DeVille became The Penny Farthing.   Borders closed up shop for good.

And there’s quite a bit of talk about how the city is “now destructible”.  He was thinking, of course, of the realization that (in the wake of World War II) New York City would become perhaps the number one target for any enemies of the US – or enemies of the world order in general.  Again, it goes without saying that there’s a level of something else that comes from reading this book after 9/11.

Rating: 5 out of 5.  Some things don’t change: the sense of excitement and energy that comes from moving to this place to follow your dreams.  Love in summer.  The varied mini-neighborhoods within neighborhoods.  All of it.  You can’t rate this anything other than a 5 – unless you don’t like New York.  But who doesn’t like New York?  Secretly, publicly, everything in between.  Read it on a fire escape on an August afternoon – that’s where I felt myself, despite it being December and me being in my apartment.  You’ll thank me.