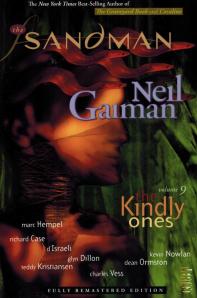 The Short Version: Morpheus, also known as Dream, must face the endgame of things set in motion many, many moons ago.  As dark powers conspire against him and his realm, he must make his final decision – one that will change the face of the Dreaming forever.

The Review: Hold this specific volume in your hands.  Feel the weight of it.  Even if you’ve never held another comic or read any of The Sandman stories, you would feel the weight of this book, far heavier than its (admittedly hefty, comparatively) page count might imply.  That is because this book contains so much… so much story.  It is the final chapter, with only an epilogue left to send us back into the world.

And it is a masterpiece.  Threads from every single story thus far wind together, bringing truly irrevocable change to the world as we know it.  Much like when one superhero dies, there is another to take their place – in this, Mr. Gaiman has upheld the long-standing tradition of the genre in which he here practices.  But this is so very different.  And anyway, I get ahead of myself somewhat.

This was a truly epic installment of the story.  Which is fitting, I suppose – after all, we wouldn’t want to see our hero go out on a dull note.  But it’s also, interestingly, the most human episode.  The philosophy is still there, the deep thoughts about stories and lives and all that… but it’s the feelings that matter here.  Lyta Hall is driven by an overpowering hatred for Dream – despite the fact that it was not his doing, in this instance, that took her child – and a very human impulse, brought on so rashly in a moment of, again, intensely human emotion, is what will shake the very foundation of the multiverse for a moment.

What is perhaps the most impressive moment of this book is one of the most understated.  And yet it is a truly perfect – flawless, I would say – succession of panels.  After the end, when Morpheus asks his sister to take him and he goes……………. where? Where do they all go?  As Death tells Hob, we can find out – just take her hand! – but now is not our time and Mr. Gaiman, much as he knows about the mysteries of the world (and by Jove, he knows more than most.  but isn’t that the way with our greatest storytellers?), deigns not to tell us.  But I digress: after the End, when Lyta Hall awakes – having been protected by Thessaly, Thessaly tells her to run.  That so many people will want to kill her for what she’s done.  And then, her coffee wafting and her book in front of her nose, she pauses.  And then says that she includes herself in that number.  A woman who had no love lost for the man who ruled the Dreaming.  And that single strip of panels, at the bottom of the page, took my breath away.  Because, much like when Sirius Black fell through the veil and it was not until a few pages later that I realized it… it was only then that I realized what had happened.  Even though I watched it transpire, right in front of me.  But it did not register for a few beats more – because it was such a complex emotional moment that it could not, it simply could not be processed right away.

If that is not a sign of master craftsmanship, then I give up my love of reading and will wander the world, looking for something that is.  That single moment, after a succession of as-incredible moments, summed it all up for me.  I can’t explain why any further – I can just tell you that that was the moment for me.

Do I want to rage against Neil’s decision to tell the story like he did?  A little – but only because I mourn the death of my friend.  I did not know Dream much better than anyone else who’s read these books… but in the moment where Matthew says to him that he was his friend, I wanted to shout that I was too!  That we could stay and fight, all of us – that the Furies, the Fates, those great and terrible women who control our stories, could be defeated.  That the tall, romantic, lonely boy who felt more deeply than was perhaps wise for someone of his kind, who looked vaguely like a Shakespearean iteration of his creator (or, his creator has grown to look somewhat like him – it is not without possibility), who provided me another kindred spirit – that we could, we dreamers and readers, could save his life.

But that’s not how stories work, is it?

Rating: 5+ out of 5.  An epic tale that speeds by in what feels like half its actual length.  It is monumental.