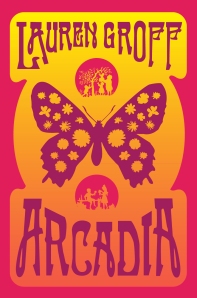 The Short Version: Ridley, nicknamed Bit, is the first child born to the hippie commune Arcadia, located in upstate New York.  This is his story – the story of his life, the story of Arcadia’s life, and the story of the bond between a mother and son.

The Review: I am of two minds about this book.  Possibly because it is two books in one.  Might actually be more than two, if you really get into it.  But I found that the book itself (much like these opening sentences) never really cohered properly: it always felt ethereal and dissolute – and as a result, the hypothetical payoffs at the end fail to, well, pay off.

On the one hand, we have the story of Arcadia – a commune founded in the late 60s in upstate New York.  It is exactly what you think: drugs, music, a charismatic hippy leader, a big old house that they’re all fixing up.  And we know that the idyll can’t last – Reagan is coming, after all – and it doesn’t: the whole thing implodes in rather spectacular fashion.  (I don’t consider this a spoiler by the way.)  But that’s only the first… two-thirds? of the novel.  The final third is Bit, living in the present/future in New York.  With a daughter, caring for his elderly mother.  And suddenly the reader is forced to reexamine what, exactly, this novel was about.

And Bit marrying Helle is also pretty locked into the story of Arcadia – the first child of the commune marries the wild child of the commune, of course he does.  But Arcadia itself doesn’t really matter to the present/future Bit.  He deals with his depression, with being a single dad, with having an ailing parent, with the worries that all middle-aged adults deal with in these trying times (war, disease, poverty).  There’s even, unfortunately, a short digression about New York in the wake of 9/11 (which felt entirely unnecessary).  The only moment that connected the past to the present is when Bit explains, somewhat angrily, to his parents that all the children of the commune came to the city because the city (this one in particular, but by extension all major cities) is the last place on Earth where you can get that level of connectivity that existed in the commune.  That feeling of being a part of something, connected deep down on a subconscious level to every other person even if you never see or interact with them.   But was the entirety of this final third constructed simply to drive home that point?  Or, more broadly, the point that human beings need connection to survive?  No man is an island, after all – but I feel like we know that and while we’re reading this book, we know that we know that.

The problem here is that we’ve not seen Bit come to this realization.  Groff seems to try and circumvent the problem that Room encountered (where a microcosm of the world is seen through a precocious youngster’s eyes – and then they are thrown into the big real world and the novel falls flat on its face) by skipping over that reentry period – but in doing so, she encounters a different problem: we lose a certain amount of our connection with Bit.  We hear about his life in passing and then are expected to still have the same connection we had with his childhood incarnation – but he has changed and so he is fundamentally not the same.  Thus, how can we feel the same about him?

Anyway, he much more interesting partner narrative to that of Arcadia (the rise, the fall, the time after) is the story of Bit and his mother Hannah.  Sure, father Abe and wife Helle and daughter Grete and all sorts of other supporting characters appear – but this novel is, truly, about a mother and a son.  It’s that narrative that really got to me.  Bit’s connection to his mother and the way that Groff evokes exactly what it’s like for a little boy to interact with his mother… I certainly don’t actively remember being a little kid and interacting with my mom – nobody can really truly remember those days.  We just have a hazy recollection, pieced together from stories and photos and imprints of feelings… but maybe a sudden smell will remind you of baking a cake or of a perfume worn on a night your parents went out on a date.  A taste you’d thought you’d forgotten brings back the sensation of a room that doesn’t exist anymore and a mom who is far younger than you ever could remember her being.  Except in this novel, we’re actually seeing those memories happen in ‘real time’.  Does that make sense?  I guess what I’m trying to say is that Groff manages to make the present-tense action of the novel feel like those sudden, unexpected, wonderful memories that we catch a glimpse of before they fade away again.  It’s a deft trick and she doesn’t tap that well often enough during the novel – there could’ve been so much more.

There’s also an interesting counterpoint to this relationship, as Bit has to take more care of Hannah as she gets older – the inevitable reversal of the mother-child relationship.  It is evocative for any child to be there with Bit as he, without hesitating, begins to shoulder that burden – without even questioning whether or not he should, because, of course he should and will.  That is what children do.  But it isn’t out of obligation – it is out of love.  And while that last third of the novel (with the half-hearted pandemic sub-subplot out in the world) drags on, feeling twice its length, the conclusion of Bit and Hannah’s story is beautiful and worth the slog.

Rating: 3 out of 5.  I really liked The Monsters of Templeton, Groff’s first book – and I expected amazing things from this one.  Perhaps because my expectations were so high or perhaps because the novel just simply is a little more unfocused and ethereal, I was let down.  I had trouble staying engaged – I wanted it to be over, I wanted to move on, I was losing interest at light speed after they left the commune… but, at the same time, the story of a boy and his mother was beautifully done.  Makes me think of my own hippy mom (Hi Mom.) and the memories that’ve built up there – and a book that does something like that can’t be bad.