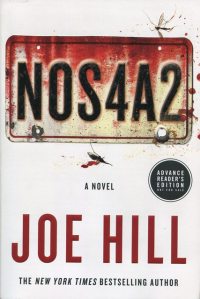 The Short Version: Victoria McQueen is eight years old when she first discovers “The Shorter Way” – an old rickety bridge that, when she crosses it on her bike, can take her instantly to wherever she needs to be.  Several years later, when she crosses paths with Charlie Manx – a vampiric maniac who kidnaps children to a place called Christmasland – she barely escapes with her life.  Now, in the present, Manx is back and gunning for Vic’s own kid – and Vic might not be able to save him.

The Review: As I started this book, I was wondering what it would take for Mr. Hill to escape his father’s impressive shadow.  I can’t imagine that any review of this book won’t mention Mr. King – they should, actually, but I’ll get to that in a minute – but I thought (as I started the book) that that would be frustrating and an unfair comparison.

Turns out, it’s Uncle Stevie who should be concerned about the comparison – his son has inherited all of his many gifts and may come to surpass him for writing ability.  And I say that believing that Stephen King is in the running for the Great American Novelist of the latter half of the 20th Century.  But Mr. Hill does a fantastic thing here: he knows that the comparisons are coming (especially considering the subject matter of this novel and King’s impending Doctor Sleep) and so he gets out in front of it by firmly committing his work to the same massive fictional world as his father’s.  There are references to both Hill’s earlier works as well as Mid-World (for you Dark Tower fans) and even a single sentence that dissolves any potential critical snark that will inevitably be forthcoming about “The True Knot” vs. Mr. Manx (again, let’s talk after Doctor Sleep) – a sentence that made me cheer inside.

But not only that, he goes one further – he gets even geekier, if you will allow it.  Followers of Mr. Hill’s Twitter account will know that he’s an avid reader and has recently been a vocal supporter of the talented David Mitchell.  So when a de Zoet appeared in this novel, listening to the Frobisher sextet… let me be honest, dear reader: I let out a whoop and a “fuck yeah!”, much to the surprise and dismay of the people around me on the train.  I have the utmost respect for writers who create, within their work, a massive structure that spans beyond individual novels.  I am a sucker for characters popping up, even in reference form, in unexpected places in order to create a more cohesive literary universe.

But what about the book itself?  Hell, where to begin?  This is an epic – this is a career-definer, I’d say.  Sure, Horns was an engaging hell-shot of a novel (soon to be a film with Dan Radcliffe, so I’d understand that novel being career-defining in a different way) and Heart-Shaped Box an impressive debut – but this book has it all.  This book is a big, slobbering beautiful masterpiece, showing a writer who is firmly in control of all his talents – to the point of being able to pull off a trick like tying his universe together with not only the Stephen King-verse but the David Mitchell-verse too.  That’s ballsy and Hill dispatches that task like it was nothing, no sweat.

Anyway, alright: let’s start at the beginning.  The dedication on this particular book is to Hill’s mother – and this is, absolutely, a novel about a mom.  You might not realize it until well into the book, although the opening sequence (disconcerting and strange and full of portents we don’t understand until MUCH later) does a pretty good job of establishing the conceit of the Mom, but this is definitely a mom book.  Well, not a mom book in that it might not be the sort of book you give to your mom – but you know what I mean.  Victoria McQueen is a rough and tumble little girl who grows up into a rough and tumble woman – but she’s got that lioness gene, no doubt.  The first sign of threat towards her cub and she goes literally to the ends of the Earth and beyond in order to protect him.  She passes the limits of human endurance – because the only thought in her mind is to protect her little boy.  Moms are pretty great like that, aren’t they?

But it’s also, of course, a novel involving a vampire.  Sort of.  I mean, the title of the book alone should clue you in that there’s SOME element of vampirism that’s happening here, in one way or another.  I just didn’t expect it to play out in the way that it did – delightfully, I might add.  Oh, I won’t go into spoilers or anything – the book is far too good and so terribly worth your time that spoiling anything would be a disservice to the universe – but I will at least put aside your concerns: THIS IS NOT A “VAMPIRE NOVEL”.  Lestat, Eric, Edward, Vlad, Barlow, and their ilk are not to be found here.
Okay, now that we’ve got that out of the way, let’s talk for a moment about Charlie Manx.  What a creation.  His voice – old-timey, which makes sense now that I think about it, with perhaps a slight Southern touch… I could hear him speaking every single line, even though I’ve never heard anyone with that particular voice before.  And I can see him, in my mind – he doesn’t look unlike the Joker, actually, although he’s much more frightening.  And that car.  My god, the Wraith is a character unto itself – herself, it’s clearly a she (aren’t all beautiful cars?).  The two of them together – with the Gasmask Man riding shotgun… it’s a classic sort of terror, all too easily written off in today’s world but it’s the sort of terror that sticks with you, deep down inside.  I’ll never look at a classic Rolls without a little trepidation, ever again.

Indeed, character is perhaps the most impressive thing about this novel: every single character is locked in my mind.  Their names, their faces, the way they talk, their quirks – all of it.  It’s almost Dickensian in the way that Hill has created a cast of lead, supporting, and day-player characters who ALL came fully formed and memorable.  You feel as though they could all have their own stories – that they do have their own stories, rocketing off tangentially from this one.  There’s a level of reality here that belies the fantastic premise – and which, perhaps, makes the novel even more frightening for anyone with an active imagination.

Of course, to talk about character solely would be to the detriment of the setting(s).  The book spans the country – the Northeast to Iowa to Colorado… so, okay not the whole country – and feels deeply rooted in each place.  The fishtank in the library in Here, Iowa; the Sleigh House in Colorado; the House of Sleep in PA – even the Shortaway itself, originally found in Massachusetts.  Every single location in the book is different and unique and fully primed to pop into your mental existence as you read.  And of course Christmas will never be the same – Christmasland is at once beautiful and terrifying (as so many terrifying things are).  Even without a visit to the terrible inscape of Christmasland, the holiday will not be the same.  For me, anyway.  It’s March and I’m already tense at the thought of hearing Bing Crosby.

Rating: 5+ out of 5.  Forty or fifty or however many, many years from now, when Mr. Hill is retiring from the lit business, this book wil be seen as the first Big One.  He had his debut, his well-respected and quite good second novel… and now this one.  It is scary, it is heartfelt, it is unabashedly smart, it is unabashedly geeky, and it is written on its own terms.  Hill lays out the story at his own pace – it was two-thirds of the way through the novel before he explicitly laid out who/what Manx & NOS4A2 are and he was unapologetic about it.  This is not a novel for those who want their stories clean and straightforward but rather like one of Vic McQueen’s Search Engine books: a beautiful puzzle, complex and nuanced and willing to reward a reader who just dives in.  Merry Christmas, everyone – especially you, Mr. Hill.