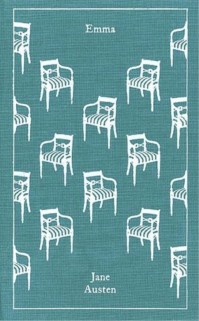 The Short Version: Emma Woodhouse, a young lady of intelligence and means, decides that she is good at matchmaking.  This, of course, leads to a series of unfortunate attempts at matching up other people – and she can’t even see the man right in front of her!  A comedy of manners that ends with a bunch of weddings.

The Review: So I think my initial nervousness about Austen stems mostly from the fact that Pride and Prejudice is, for better or worse, so much bigger than that book now.  The story is one that exists in our cultural consciousness and the novel itself (I think) suffers a bit for it: there’s no way you can read it now and feel it to be entirely ‘new’.  Whereas with Emma (or, I should hope, the rest of the Austen novels), there’s a sense of getting to see just what kind of an author Austen is.

And it turns out the answer is “a damn funny one.”  I’ll admit a certain amount of trepidation going in, based solely on the introduction mentioning a quote from Walter Scott about the book, saying it had even less action than P&P.  Merciful heavens, I thought – whatever am I in for now?  But then it ended up being, on the contrary, a delightful and frothy comedy of manners.  The supposed “lack of action” is a misunderstanding on Scott’s part: the novel isn’t about much more than a woman who is, as my sister put it so succinctly, “kind of a hot mess” and the various trouble she stirs up as she tries to match-make with her friends and acquaintances.

I mean, I’ll grant you: that’s not MUCH in the way of plot.  And there are, yes, times where you wonder if anything is actually going to happen or if they’re just going to talk about this failed couple or another ball is going to pop up.  But whereas I found those moments of pastoral English gentry-life to be a bit frustrating in P&P, here I simply found them to be enjoyable.  It takes a bit of work to read Austen, I won’t deny it: but that’s because she transports you to that very sitting room and, much as one might if a conversation bored them, you might zone out a bit.  When you come back, nothing much has changed but you’ve probably missed some juicy gossip.   At least, this is how I justify the few times where I did just that and had to go back.

What really makes the novel support Austen’s claim to one of the Greats is that she writes these delightful characters and imbues them with such life that you can’t help but want them to be happy.  Emma, as annoying as she can be, is a lovely girl and when she does finally find happiness, the reader is happy for her.  Knightley is a terrific (and much more realistic than, say, Darcy) gentleman and the supporting cast are all full of quirks and idiosyncrasies that make them all so human.  Emma’s hypochondriac father feels almost like something out of Dickens – except for that Dickens would’ve been inspired by Austen and not the other way ’round.

Rating: 4 out of 5.  Just a delight – excellent for the slowly-livening spring outside.  It doesn’t have much happening and yet it zips along (at least as fast as one could be said to zip through a classic, of any stripe).  It’s a simple sort of pleasure: one sits, reads, and is transported to the English countryside during the Regency and we simply get to experience the delight of what life was like at that time.  Plus, the romance?  It’s all damn good – these sorts of couples make me happy at heart.