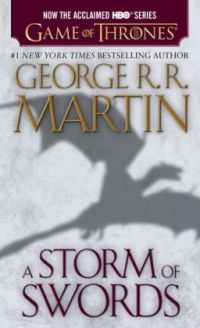 The Short Version: In the wake of the Battle of the Blackwater, the War of the Five Kings rages on.  Renly and Balon are dead, Stannis nursing his wounds and striking all kinds of scary deals with his Red Woman, Robb Stark a King without a seat, and the Lannisters threatening to tear themselves apart from within.  Meanwhile, Daenerys continues to build a host in the East and a new threat looms in the North…

The Review: I’ve been trying to space out my reading of the Song of Ice and Fire series as far as I conceivably can.  It’s a foregone conclusion that I will catch up long before old man Martin manages to put a cap on the series but I’d like to prolong the pain of having to wait for that final book as long as possible.  Put another way, I’d rather spend, say, two or three years waiting as opposed to five or six.  Less likely to forget things that way.

Of course, the problem with these books is that there’s so darn much to forget.  I spent the first few days of reading this book trying to put together where things stood in the Seven Kingdoms and who was currently for/against whom.  I’m all for complex and layered storytelling – but I had more than a few moments over the course of the first two hundred pages where I wondered if Mr. Martin had expanded his purview a bit too much.  It’s to his credit, however, that I was thoroughly wrapped up in the story by the time the book ended, though: my memory caught up with my reading and when it occasionally blanked on something, the terrific “World of Ice and Fire” app filled in the gaps.  Seriously, that thing was an amazing purchase, considering how long I’m intending to take with this series.

Speaking of length, I have one other complaint before I get to the good stuff.  It’ll actually provide a nice segue into the good stuff: I’m starting to wonder what, if any, resolution we’ll see to this series.  I’m well aware that conflicts such as this War would take many years to resolve.  I’m even cool with all of the various plots that are flying around – like the impending invasion(?) of the Others, Dany’s shenanigans overseas, and all of the other game-of-thrones stuff happening in Westeros.  But I don’t really see any satisfactory resolution to these plots because Martin has done the incredible job of making us care about almost every single one of these characters.  Even the most initially repellent characters (like Jaime Lannister or the Hound) have humanizing and redeeming qualities.  I’m not saying that they’re good – I would never, ever go that far – but they are human and have reasons and rationale behind their actions.  So how can you truly root for anyone?

SPOILERS for both TV & book series ARE HEREBY IMMINENT.  YOU HAVE BEEN WARNED…

Especially when Martin keeps friggin’ KILLING PEOPLE.  My attention, I have to admit, was starting to flag a little bit as Robb kept bungling the life bits of being a king and the Lannisters were doing their tricksy den-of-snakes thing and, good gods, Daenerys and her dragons are cool and all but that plotline is getting irritating as hell.  (ed. note – that said, she often will redeem herself by doing something as incredibly awesome as when she nearly traded her dragon but instead KICKED SOME ASS).  But then Martin pulls off one of the most – no exaggeration, no lie – amazing sequences in the history of the genre: the Red Wedding.  Not only did I have no idea what was coming (although just as Catelyn started to get nervous, so did I), it was handled with such devious pacing & plotting that I went back and re-read the whole sequence just because I enjoyed it so much.

What’s really amazing, though, is that he then does the same fucking thing and gets away with it.  That’s right, folks: two weddings, two deaths.  Someone even makes a joke at Joffrey’s wedding about how “ooh, dangerous! weddings are dangerous!” and then Joffrey dies.  He kills two kings at two weddings, a plot twist that would have a lesser writer pilloried… and he pulls it off with a wink and a grin.  Indeed, those sequences showed an evolution in his writing ability and even more broadly the way he writes: instead of bouncing from character to character in a sort of circular fashion (character-narrators pop up but then disappear until many many many pages later, as the stories all spin madly on), he allowed a scene (or sequence) to play out over 150 pages and two narrators.  PS I’m thinking, specifically, of Tyrion and Sansa and the events surrounding Joffrey’s wedding, for those keeping track at home.  It was incredibly well done and felt like a bit of a concession to the reader – and thankfully so.  To have cut from that action in the midst of it all to go anywhere, no matter how interesting, would’ve caused mutiny.

It’s like that whole double-wedding sequence reinvigorates the book, too.  From there, everything is crackling with energy (except really Dany’s stuff – she goes back to playing Hamlet by about the midpoint of the book) and the mish-mash of confusing plots that ended the second book has begun to streamline by the end of the third.  I feel confident (or at least somewhat confident) that if you were to approach me in, say, 8 months (or thereabouts, whenever I go to pick up the next book) that I will be able to tell you roughly where things stand – whereas when I picked up this book, I could barely recall that the Battle of the Blackwater had only just occurred.

It seems a little bit forgotten, actually, in lieu of all of the other things that get discussed when bringing up this series… but Martin has done a really terrific job at creating a true fantasy world.  The rules and laws that govern it, the history behind it, even the geography and climate – it’s all, well, fantastic (in both senses of that term).  Where so many other authors hesitate, Martin dives in and expects his readers to keep up.  It’s an impressive quality, considering that reading these books demands incredible devotion.  I mean, it took me as long to read this as it took me to read Bleak House – and while Martin’s series will undoubtedly go down as the greatest fantasy epic of all time and will be proudly shelved as prominently as any “classic”… there are people who will argue that spending that much time on Dickens is time-well-spent, whereas spending that much time (…times seven) on fantasy is brain-rotting.   I’m obviously not one of those people – give me more, give it to me now; how do I have the willpower NOT to rush out to B&N tomorrow and get A Feast of Crows? – but it’s interesting to note that this series, for all of its realities and grittiness and so on… it’s fantasy.  It’s the sort of stuff I was being mocked for enjoying as a middle schooler who read on the playground (although, to be fair, I was mocked for anything I happened to read on the playground – fantasy, classics, mysteries, thrillers, you name it… other kids hated reading/readers) and now it’s one of the most popular shows on TV and everybody and their mother wants to read this series.

If that’s not amazing…

Rating: 5 out of 5.  I’m willing to forgive authors for length, even when I do get a little bored or restless, so long as they manage to do something interesting and reel me back in.  And boy did Martin ever do that.  With a diverse and challengingly human cast of narrators, a complex and thought-demanding series of plots, and an increasingly interesting world to play in, he has continued to set the bar for this type of novel.  Indeed, I think this one has been my favorite thus far – I gasped, I re-read bits, I laughed, and several times I stopped to consider what it is to be human.  Tall order for a book with dragons in… but I learned long ago that fantasy has the greatest likelihood of such surprises, in all of literature.