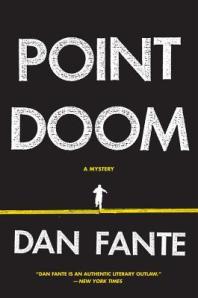 The Short Version: JD Fiorella, former New York PI and recovering alcoholic, is barely keeping it together in Los Angeles.  He’s been kicked out of his mother’s house, hanging onto sobriety, and trying to hold down a used car job.  But after his friend is murdered, he risks everything to go after the shady killer – including his own life.

The Review: If you’ve been a regular reader here, you might notice a trend (well, you might notice several but that’s beside the point) when it comes to locations in literature.  Places evoke certain feelings – they do that in real life, in memory, but also in literature.  The British Isles are usually pretty gray and cool, Italy just one big stretch of coast with some stepped towns & Rome in between, the South full of big trees with Spanish moss and girls with big hats sitting on porches, etc etc.  I mean, these are all generalizations, but we build these basic markers into our minds so that we can then hit the ground running whenever our imaginations are called upon to deliver us to these places.  But there’s a bit of a double-edged sword there: these places can infect the way we experience the book we’re reading just as much as the book is supposed to call up these places.

So maybe that’s why I felt like I was shading my eyes, fighting through haze, the whole time I was reading Point Doom.  Put another way: it’s too bright in LA for noir.  I couldn’t shake the brightness, even in nighttime scenes, when it came to reading this book – and it kept me just faintly grimacing a little the whole time, like a touch of a hangover on a sunny morning.

Of course, our hero seems to be suffering through basically the same thing.  He’s pretty paint-by-numbers, our Mr. Fiorella: a last bad job in New York that resulted in a lot of bodies and a lot of nightmares sent the already-a-functioning-alcoholic PI into a tailspin, one that finally bottomed out in LA.  At the beginning of the book, he’s basically being kicked out of his mom’s house – where he moved back to – and, at 46, looks pretty washed up.  He’s a pretty scummy guy, to be honest – might not drink or do drugs anymore but hookers and sleazy car salesmanship come easy to him and he’s not the sort of person you’d really probably want to spend much time with.  And therein lies a bit of a problem.  Most anti-heroes are engaging despite their flaws – but Fiorella never really got to that point.  He seemed so generic that I never really committed to caring about him or his problems.

And his problems, I’ll say, are legion.  This book has two things to recommend it: one, the languid layers of plotting that bring to life the middle-aged, washed-up lifestyle in LA… and two, the violence.  Holy shit is there a lot of really impressively graphic violence, put to the page with almost a touch of glee by Mr. Fante.  It gets started unexpectedly and at full speed with the discovery of a dead body about a third of the way into the book… and a particular excised body part that becomes nearly (emphasis on nearly) comical as it pops up throughout the rest of the story.  But it (the violence) quickly becomes almost too much – and I’m not squeamish, nor do I shy away from a good violent adventure.  But it felt too… easy for Fante to present this violence. He didn’t earn the stomach-twisting torture scenes because he never gave me anything else to latch onto – or, to put it another way, he wanted to make me sick but hadn’t put anything in my stomach first.

At the end of the novel, a twist comes into play – not a twist, per se, but a revelation at least – that felt completely out of left field.  Again, it was as though Fante neglected to develop certain parts of the story before giving us a piece of information that we probably should’ve seen as a whopper but instead I sort of thought “….well, that’s an awfully convenient and tenuous reason for all of this to be happening.”  As a result, I closed the book (a speedy read, I’ll give it that) with a sense of feeling cheated out of the full experience of the story.

Rating: 2 out of 5.  I usually don’t like to ask this question but sometimes a book makes me wonder: why this story?  It doesn’t feel much different from any number of other middle-of-the-road crime/mystery novels when it comes to plot or characters – in fact, other than the few utterly shocking descriptions of violence, I couldn’t really find anything to distinguish it at all.  That’s not to say that it’s bad, not really – it’s just that it’s not really worth your time.