Hi everyone and welcome back to another installment of our recurring feature, The Art of The Cover.  Today, in honor of pub day for The Last Word (Document #6), we’re taking a look at the cover art of Lisa Lutz’s brilliant Spellman Files series – from its earliest covers to the current (gorgeous) rejacketing campaign.

If you’re unfamiliar with the series, let’s start at the beginning.  The first novel in the series, The Spellman Files, originally looked like this image to the right.

That cover, in a single image, captures everything you need to know before you start.  A family, sitting together – but they’re all spying (maybe on you).  There’s something quirky and silly about it – there’s something mysterious happening here – but also the warm, awkwardly-intimate sense of a family.  And that’s the book, in a nutshell.  I won’t go into plot or anything like that but simply say that, if this was a single novel, this cover would go pretty far.

But as the series turned into, well, a series, the need for a more uniform cover was obvious.  So, Documents #2-4 (to use the delightful installment-naming system that Izzy Spellman coined) ran with the “eyes poking out” motif and the covers were… fine.

But nothing about these covers said “PICK ME!” – they were cute and bright, but it was unlikely that a reader who judges on the cover would see anything different about these books from any other airport mystery (think the Stephanie Plum series).  There was nothing here to make a glancing reader stop, do a double take, or say “oh, that’s… that’s interesting, what is that?” if they weren’t already inclined to do so.

When Trail of the Spellmans (Document #5) hit, however, I found myself doing a double-take as I walked by the book on the shelf.  The image – new, which was exciting enough – was a subtle optical illusion: a beam of light, as though from a door cracked open, illuminating footprints… but those footprints also providing eyes under a hat, above a trenchcoat.

The bold and unusual colors helped draw the eye and then the eye was kept on the book by the fact that it took a moment to see everything the book was offering.  If you didn’t know about the series, I feel like it’d almost be impossible not to at least get this cover stuck in your mind – and what could be better?

I watched eagerly to see the rejackets roll out across the first four books and I wasn’t disappointed: each of them had a similar sensibility.  There were dynamic colors, a double-meaning image, and I loved the little “Document #X” tab in the corner/on the spine.  Even the fact that each of the new covers (see below, working back from Document #4 to Document #1) was directly tied into the book somehow – Document #4, with the key-jail-cell cover, has a subplot about a wrongly imprisoned individual.  I won’t spoil the connections for the other books but they’re all subtle to the point that you might finish the book, go to put it on your shelf, and say “OHHHH, nice.” as you realize what the cover connects to. 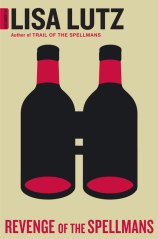 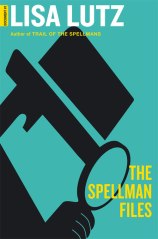 Of course, the series rejacketing – the attempt to make the series feel more like, well, a series – came just in time for Document #6: the first Spellman novel not to carry the family name in the title.  But because of the trend created by the preceding 5 books, now all rejacketed and uniformly displayed on shelves, it’s immediately clear that this “Document #6” must fit into the same series as these other books.  It’s a masterful coup and shows that someone (or, hopefully, many someones) at Simon & Schuster really put some thought into this.  As a result, the newest cover feels like something exciting – something that loyal readers have been waiting for as much as the book itself – while also something that can still pull new readers towards the series. 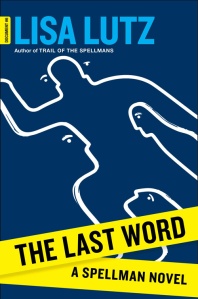 The entire Spellman series is absolutely one of my favorites and I couldn’t be happier to see the books given such terrific treatment here in the States.  It’s still, sadly, all too rare to see a modern author given the opportunity to be jacketed so thoughtfully and so the folks at Simon & Schuster, book designer Davina Mock-Maniscalco, Miss Lutz herself, and (of course) the Spellman clan should be pleased at the wonderful work on display here.  The only sad thing for readers from the early days can’t get the new covers in dust-jacket form for our shelves!