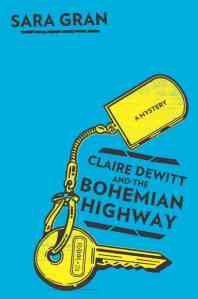 The Short Version: Claire DeWitt, last seen leaving New Orleans, is back in San Francisco and working on a new case, one that’s a bit close to home.  An ex-boyfriend is dead and Claire’s on the case – but it takes her closer to the edge than any case before.  As she starts to crack under the pressure of life and the cases on her docket, the memory of an old case flutters up towards the light and reminds her of just how hard this detective thing can be.

The Review: I liked but didn’t love the first Claire DeWitt novel, the inventive but sometimes hard-to-get-into-a-groove-with Claire DeWitt and the City of the Dead.  My biggest problem, at the time, was Claire herself.  She felt a little pretentious, a little bit too contrived – there was just enough artifice that I wondered about whether or not she was fully-fleshed-out under it all.  Happily, this sequel puts Claire front and center – and as a result, I found myself caring about her.  Deeply.

The plot, too, is old-school mystery: I’ll get to the cases in a moment but let’s address the need for anything to quote-unquote “happen” at every moment in the story.  That is not the case here, in the grand tradition of Chandler and his progeny.  As Claire says when she explains why she has an assistant, there’s a lot of boring shit that goes into solving a mystery.  Lots of research, pounding the pavement, really snoozy and mundane stuff.  But then there are also those moments that can’t quite be explained – and I really have to say I adore the mystic aspects of this book.  The Poker Chip Man, the Red Detective, even the totally-mundane-and-yet-shrouded-in-something-else stuff happening in New York earlier in Claire’s life… it’s all refreshingly unique and it also hits the spot for a guy like me who does believe in certain aspects of it all.  I think, if I read Silette’s book, I might’ve been a Silletian.  Or at least I would’ve understood it, maybe.  Maybe not.

Anyway.  There are three cases going on in this book.  One, a case from Claire’s past that has interesting ramifications for her present (and possibly future).  Another, the main drive of the story: The Case of the Kali Yuga.  And then a third, mostly for comic relief, is the Case of the Miniature Horses.  None of them correct, not directly – not in the way you’d expect some hard-boiled mystery novel to connect.  Instead, they connect on a subtle and deeper level, one of feelings and mysticism and intuition.  There was one connection in particular that Gran works into the story so smoothly and carefully (and chronologically out of order) that when it triggered in my mind, I had such a rush of connection to the novel itself.  Simple pleasures.

Speaking of pleasures, Claire is maybe not the most pleasant person to be around or spend time with.  She was abrasive as hell in the first novel but affectedly – now, we see the truth: it’s not affect.  It’s her defense mechanism against the thoroughly messed-up view of society and life itself that she carries with her on a daily basis thanks to Silette’s book and to her own interpretation of that worldview.  She’s doing a significant amount of drugs here, having a fair amount of indiscriminate sex, and trying really only half-heartedly to make any sort of meaningful connection with anyone.  And based on the case in question – the death of an ex-boyfriend – you can’t exactly blame her.
Indeed, I found it difficult to do anything other than associate and commiserate with her.  Is that a scary thing to say?  (ed. note – I’m not doing drugs or anything, please no one worry)  But I think we have all, at one time or another, felt the Existential terror of facing an absurd world and feeling beaten down by it.  The Silettian detective thrives on the truth, despite the fact that the truth is the most destructive of forces – the truth does not satisfy, it does not make one happy, but it is what is necessary.  But as a result, Claire is not only the detective I’d want on my case… despite the fact that her life, her life is a mess because of it.  The numbness that she feels, being overwhelmed by what it is you do – we can all relate to that.  At least, I know I can – that feeling of pouring yourself into something that takes more than it provides and the need to then feel anything that could connect us back to the world.

But we’ll all get to be vultures again at some point, won’t we?  That’s what we’re hoping for, anyway.

Rating: 5 out of 5.  From start to finish, I was engrossed with the novel.  When I wasn’t reading it, I wanted to be reading it.  Where others might turn away from the (admittedly intense) drug use and violence and seediness-of-humanity, I leaned into it.  It’s smart, funny, serious, and heartfelt – but not heartfelt in the way you usually hear that term.  Instead, I mean here to say that it makes your heart feel things.  If you read this book and connect with it, you might be a Silletian… and if you read it and shrug, then the truth – the real truth, the truth that does not set us free but rather keeps us trudging on – is not for you.