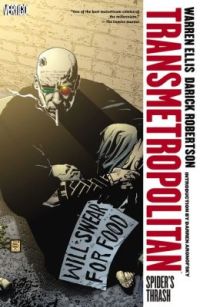 The Short Version: Having been booted from The Word and nearly assassinated, Spider and the filthy assistants are on the lam.  But just because he’s back on the streets doesn’t mean Spider’s done fighting – on the contrary, he’s more driven than ever.  The only thing is, he might be dying.

The Review: The cover says it all with this one: things have gotten a little darker and grittier in the world.  The first three issues of this volume show Spider and the filthy assistants living somewhere, well, filthy.  They’re not spending money, they’re continually under threat of assassination or worse, and life isn’t as rosy as it once was.  But Ellis really takes a bold turn in the last three issues of this collection, using them as a sort of call-to-action in social justice terms.  It’s not unexpected but it feels more journalistic than maybe anything Spider has done so far.

One issue is just interviews with crazy people – they each get one page, six panels (give or take) to tell their story.  The religious nuts, the conspiracy theorists, the murderers, the compulsives, the insane – the people just like you and me.  And it provides for the reader a remarkable look into the society of this future New York, better than any we’ve received thus far.  Because suddenly we see the cross-section and realize that even in the future, not a whole lot is going to change.  When Spider goes after a story about child prostitutes, it feels heart-wrenching in a way you don’t expect from a graphic novel, let alone one that’s essentially just “a pretty container for a lot of swearing” or whatever it was Warren Ellis described it as when I’d asked him about a box set.  But seeing the humanity in Spider, seeing how he genuinely cares not only about these poor ruined children but about the poor ruined society that engender them…  It makes your heart twinge, it really does.

There’s also, though, this desperation leaking out of Spider.  He’s clearly ill – the filthy assistants notice it and discuss it and he tries to hide it from them but, of course, he can’t hide it from us, the reader.  Nosebleeds, blackouts, lost time… there’s something really wrong with him.  And it’s making him push even harder to try and get everything done before he reaches the end of the line.  The final moments of this volume, when he begins to record a message to Yelena and Channon to tell them what to do, in case he can’t do it all… For the first time, we see true weakness in Spider.  And that, my friends, is terrifying.

Rating: 4.5 out of 5.  The social justice aspects of this volume make it somewhat different from any that has come before – this is not to say that the previous volumes haven’t done similar things, haven’t shown Spider’s kind heart, but this was different no matter how you dice it.  There was anger here, an anger that comes from frustration – and it’s not just Spider’s, but (I think) Ellis’ too.  We know the showdown with the President is coming, but hopefully there remain moments like this, where Spider does good for society in more subtle ways as well.