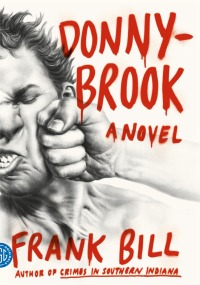 The Short Version: Every year, down in Southern Indiana, there’s a big ol’ weekend-long fight called the Donnybrook.  Knockdown, drag-out scrapping – and the winner pulls in a helluva prize.  Jarhead Earl, looking to set him and his family up for life, heads that way – getting into a few warm-up scraps as he goes.  Meanwhile, Chainsaw Angus and his sister Liz are headed that way to sell some meth – and several other unsavories are on the trail of them or Earl or several others.  And it’s all coming to a head at the ‘brook.

The Review:  Let me start with a warning, for those who are sensitive to these things.  There will, I fear, be a bit of rough and coarse language used in this here review.  Sorry, but in order to talk about a book like this, you have to speak its vernacular.

So if you’re easily offended by cussin’, you should head elsewhere.

Now that that’s sorted: what the FUCK just happened?!
This was my reaction upon finishing this book, which started off like a hit of meth and then never once slowed down.  It is blisteringly fast, full of outrageous violence and overwhelming stupidity – and then it all snowballs into what Part 3’s title accurately calls “Pandemonium”.  This book will make your head spin, probably because you’ve just been punched in the face and you head is now literally spinning around, possibly moments before you black out onto the pavement.

I can’t even really process it much further than saying that there is a shitpile of crazy here and I honestly can’t remember the last time I read a book that was so…. I think I’m going to go with “unhinged”.  Frank Bill, the author, has no real consideration for anything other than the story he’s here to tell – and while I think that’s a damned good thing, I can see how you might not be so easily convinced.  And this is a book that will definitely not appeal to a wide swath of readers – the violence, the language, the rampant drug use… it will probably mess up all but the heartiest of readers.

The thing is, there are some lovely and incredibly detailed portraits of people here.  If nothing else, Bill has a gift for shaping these fucked-up people.  Liz, especially – described basically as sex on legs, she’s possibly the most nuanced and well-defined (pun slightly intended) character in the book.  She also seems to be the only one with a modicum of an actual plan, although that’s not saying too much.  Actually, if there’s one major problem with the book, it’s that there are too many characters and it gets a little difficult to remember who means what to whom.  It’s not to say that they’re not individual – every single one of them, even if I can’t remember their names, has an image in my head – but rather that the action snaps around so fast, a reader can lose focus rather easily.  And the connections, which are all pretty well-defined by the mid-point of the book, are unclear at the beginning, leading to some confusion sometimes.

My other… “issue” I guess with this book is that there’s a character who feels somewhat out of step.  Purcell, the mystic/psychic/prophet guy, is the one I mean.  He feels like something more akin to Donald Ray Pollack’s work (an author to whom Frank owes and acknowledges a debt) as compared to what I understand of the author’s work by this single novel.  Especially as the novel rises to its bloody (even by the preceeding pages’ standard) conclusion and Purcell drops a cliffhanger into our and Jarhead’s laps…. you suddenly wonder just what the hell was going on.  This novel seemed suddenly less about the Donnybrook and more about setting up Jarhead for another story entirely.  And maybe that’s the point – I kind of hope it is.  But this also then ends up coming off as – and bear with me here – a prequel to a book that hasn’t been written yet.  The sort of thing you’d publish after the next book, to say “how did Jarhead get there?  what’s this donnybrook thing they mentioned?” as opposed to the starter novel.  And I’m not terribly convinced of the need for most prequels, so you have to understand that this is a rare desire/interest for me.

Rating: 3.5 out of 5.  I’m tempted to rate the book higher, give it a full four stars – but there’s something stopping me.  It’s not the violence or the content – in fact, I actually rather enjoyed how many different ways to inflict pain or describe said pain Mr. Bill was able to deploy.  I think it just was the maelstrom of characters and choppy structure that got to me.  I wanted, of all things, just a little more cleanliness to the whole shebang – considering there’s so much mess in the story itself.  But gawtdamn this was a bullet crack of a read.  I was shaking my head when I put it down – and laughing, too.  It’s as insane as all the hype tells you.  I’d suggest taking the trip, if you’re in the mood.  You won’t regret it, that’s for sure.