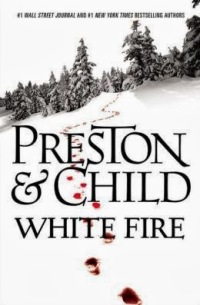 The Short Version: Corrie Swanson, protégée of the dapper and strange Agent Aloysius Pendergast, has come up with an idea for a potentially award-winning paper and so she jets off to Colorado – and winds up in big trouble.  Pendergast comes to bail her out and arrives just in time for an arsonist to horrifyingly assault the town.  What does this all have to do with a missing Sherlock Holmes story?  More than it might seem, on the surface of things…

The Review: In yet another enduring mystery of my literary exploits thus far, I struggle to believe I’ve never read a Preston & Child mystery until now.  I’ve seen them on the shelves, been intrigued by their artwork and descriptions, and I know I saw The Relic at some point back in the day – but somehow it was an ARC grabbed blindly during that initial rush on the first day of the BEA that finally made it happen.

Happily, although this is the thirteenth (oooOOOoooOOOOoooo) mystery to feature the delightful Aloysius Pendergast, it’s plenty accessible to a new reader – and even sets up a lovely ‘introduction’ to a comparison well-trod by established readers, that between Pendergast and Sherlock Holmes.  He is, indeed, a Holmesian sort – coolly calculating, not showing too much emotion, master of deduction, etc etc – but he also stands out as something unique, right from the get-go.  His early introduction in this book makes him seem almost ill – pale, languid, that lazy Southern accent… but when he arrives in Roaring Fork, hoo boy, the fireworks (pun only lightly intended) start fast.

There’s clearly a bit (or more than a bit) of history regarding Pendergast and his intrepid ward Corrie.  She’s not REALLY his ward, not really his protégée – but she’s also definitely both of those things.  Of all the questions I had throughout the book, I was most curious to get that background explained – and it was the only point that would make me say “don’t start here.”  You can, of course, but it’s always more fun to get the information in order.

Regardless, Preston & Child have a ball putting together this particular mystery.  The novel itself opens with a bravura scene, imagining the real-life meeting between Oscar Wilde and Arthur Conan Doyle – the meeting wherein both men were commissioned to write, respectively, The Picture of Dorian Gray and The Sign of Four.  But the imaginative license tacked on by P&C is what pushes our story forward – and provides, rather delightfully and unexpectedly, the ‘reveal’ of a lost Holmes story.  There’ve, of course, been stories of lost canon pieces – stories lost, destroyed, never revealed, etc – but they’re so often presented as their own piece and written with a bit too much effort.  This one, on the other hand, was not only a really fun way to (with the blessing of the Doyle estate, no less) present a “lost story” but one that seemed to flow rather effortlessly.  There are certain tropes that all writers of modern Holmes stories must follow and P&C do so – but they also, as the better modern-day Holmes writers do (looking at you, George Mann!) put their own stamp on it as well.  Only instead of the stamp coming from the pastiche, it comes from the way the story is inserted into our main narrative.

That main narrative, by the way, sets up the reader for some really heightened scary stuff.  The mountains in winter are a scary setting – the Donner Party has become a myth long lodged in the national consciousness of America, as has the tale of the Overlook Hotel – and the authors do a great job at ramping up the tension as the story barrels forward.  But I found the ending, the denouement, to be a little… tidy, quick, predictable.  Easy, perhaps, would be the right word.  Corrie’s bullish insistence on being just dumb seemed at first just a character choice but by the end became something more like actual stupidity – and the reveal of the arsonist, while providing a tidy connection to the Holmes story and the mystery of the miners, lacked any sort of real emotional punch for me.  Perhaps if I knew Corrie better, I’d’ve felt stronger about all of this – but I thought it all rather “eh”.
Which is a shame, because I so dearly loved the first 3/4 of the book.  I mean, really just dug the hell out of it.  I’m itching to find the time to devote to tearing through the other twelve books in the Pendergast series, as I once did with Jim Butcher’s Dresden Files… now, if only I knew where I left my time-turner.

Rating: 4 out of 5.  A strong introduction for this unfamiliar reader to a character I’d very much like to see more of – and who I have the opportunity to get to know over the course of many more books.  The unexpected surprise of a short Sherlock Holmes story (not to mention cameos from Mssrs Wilde and Conan Doyle) only added to my enjoyment of the pulse-pounding novel.  If the ending left a bit to be desired, if it felt too clean and too easy… well, sometimes that’s the way mysteries come to a close.  It doesn’t make it a bad book, just keeps it from being truly excellent.