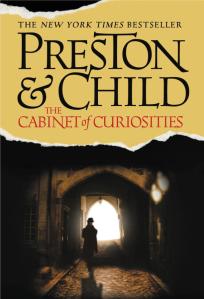 The Short Version: When a 19th Century charnel house is discovered under a construction site on the Lower East Side, it would at first appear to be simply a find of archaeological significance.  But Special Agent Pendergast arrives on the scene and with him comes the sense of something far larger at play than New York realty & politics. When new murders start popping up with the charnel house M.O., Pendergast must unmask the new killer before he and his associates become the next victims…

The Review: I’m fascinated by the gap in time between Reliquary and The Cabinet of Curiosities.  The former was a novel of the late 90s – whereas the latter is from 2002, a brave new world in so many ways.  But the time away from Pendergast did Preston & Child good, I think – this novel feels so much more original and assured than either of the first two books.  It feels more distinctly like the beginnings of a series – or, if not the beginning, the first sense of it becoming something truly worth following.

This is not to sell the earlier books short, nor their cast of characters.  Roguish journalist Bill Smithback returns and Pendergast briefly mentions Margo & D’Agosta – and Mssrs. Preston & Child do a terrific job of creating individuals out of their supporting cast.  They might be pressed out of traditional molds (the gruff NYPD cop with the heart of gold named O’Shaughnessy, for example) but they feel vivid and lively when they’re on the page, no matter how predictable they might at first appear.  Smithback was a welcome return and Dr. Kelly (who, I’m told, features in an interim novel called Thunderhead that, apparently, describes more directly the adventure she and Smithback shared in Utah that is mentioned a few times in this book) was a delightful replacement for Margo Green – although she did, a little bit, feel like a replacement.

The star of the book, though, is Pendergast.  No longer a part of the ensemble – even when he’s off-screen, he’s definitely the lead here.  We are introduced to quite a bit of information, in fact, about his family and about the man himself.  We’ve already seen plenty of the established quirks – his cadaver-esque appearance, the silver Wraith, the apartment at the Dakota, the taste for finer things… but we get some family history here as well as a look into, literally, the man’s mind.  I’m a bit predisposed to the sense of Holmes about the whole thing, having started with White Fire – but Pendergast, in a way, does Holmes one better because we’re allowed in.  We get to see the man at work in a way that Doyle never thought to present – but in ways that newer adaptations have undoubtedly taken note of.  Steven Moffat’s mind palace for the Cumberbatch Holmes pales in comparison to the one Preston & Child created for Pendergast – and I’ll bet there’s some inspiration taken nonetheless.

The final third of the novel – and this is a big novel, in its paperback form, clocking in at over 600 pages – absolutely rockets by.  Our authors give away one of the reveals a little too soon for my tastes – but then pull the rug out with another in a way I never saw coming.  From the moment Smithback gets a particular address, I pretty much couldn’t put the book down – and really, what more could you ask for?  I also deeply appreciated the remaining sense of ‘weird’ surrounding these novels.  I’d worried, a little bit, that they might get too procedure-y, too traditional-crime – but the reveal behind Leng’s mysterious quest and the truly creepy stuff surrounding the Pendergast family give me hope that P&C will continue to allow the series to be a little weird, even in the face of keeping it all pretty grounded in reality.

In closing, let me amend something I said earlier: this book feels actually a little transitional, in a way.  For one thing, the poor Museum of Natural History – still struggling with an unexpectedly high staff mortality rate (seriously, for a museum, it’s a little crazy) and still struggling with sassy mid-level staff who just want to do science, damn it!  But the inclusion of the museum, both in its staff and its environs, allows for a sense of familiarity – a reminder of “you know Pendergast, you know what we do” while also allowing the authors to take a step further afield.  We’re introduced to things far wider reaching than Manhattan here, even though we never spend more than a little time off the island, and it has me ravenously excited for the rest of the series.

Rating: 5 out of 5.  This one ripped by, delightfully.  The self-contained story was delightful while also opening up doorways into the rest of the world-as-inhabited-by-Pendergast – I’m damned excited to see where it goes next.  If even half of the rest of the books keep up this general level of quality, this is a series I’ll continue reading with pride.