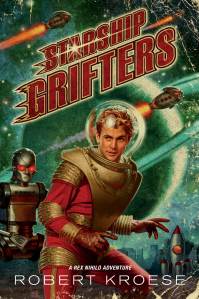 The Short Version: Rex Nihilo is just a no-good, maybe-kinda-stupid smuggler/con-man.  He, along with his long-suffering robot sidekick Sasha, bounces around from debt to debt, misadventure to misadventure… until he ends up suddenly winning a spaceship AND a planet in a card game.  Things spiral out of control very quickly, with Rex barely keeping half a step ahead with his cockamamie schemes – that might just end up saving the galaxy…

The Review: What makes a parody a parody instead of a rip-off?  I’d wager that no one could quite tell you where that line is – or, rather, they’d tell you that it’s a moving target.  So you’ll have to decide for yourself how you feel about Starship Grifters – but I can promise you, you’ll have an opinion within the first ten-fifteen pages. On the one hand, if you grew up with Star Trek and Spaceballs and the work of Douglas Adams and Terry Pratchett, then you will probably find something divertingly entertaining here.  On the other, if you’re more of a purist about your sci-fi – or, honestly, if you’re interested in anything more than a diversion – you might take more of an issue with this novel.  Happily, I walked into it seeking nothing more than a pleasant diversion and was rewarded in kind.

Things get off to a rip-roaring start: our robotic narrator explains the basic background on our ‘hero’ Rex and we watch him somehow manage to (against all odds) win his way out of this card game – and within minutes, it’s clear that things are going wibbly in ways that nobody quite understands.  Rex is exactly what you’d expect him to be (a drunk, a coward, and generally incompetent) and yet we end up being somewhat on his side.  Maybe that’s because Sasha is, in fact, the most engaging and endearing character – despite the overly plot-device-y twist of her often shutting down on the verge of having an ‘original’ thought (it was a way of getting out of the robots-developing-sentience trap that killed oh so many) – and so we want to believe that things are going to work out well for her and, by extension, for Rex.

Our supporting cast are largely drawn from the Star Trek pool at Central Casting, although to no one’s detriment.  They all get some good jabs in at their own expense (the redshirts, the ridiculously-large-breasted sexy female rogue, the screaming villain, the weird mystic [although I guess he’s more Star Wars], etc etc) In fact, Stars both Trek and Wars heavily influence the story here – and I guess that’s my big problem, really.  I worried, consistently while reading, that things were veering too far into the rip-off territory of parody.  Oh, Kroese managed to steer the literary ship back over the line most of the time – but good god, it came close way more often than I’m comfortable with.  As characters say several times throughout the novel (I’m paraphrasing): space is ENORMOUS, why did you end up back in this particular spot?  I mean, Kroese lands the coup of the idea of “Euclidian vs. non-Euclidian” travel through space – it’s absolutely bloody brilliant, the idea of creating an alternate geometry and feeding it to your computer in order to quickly traverse light years at technically slower-than-light speeds.  So why, then, did he feel the need to fall back on what a plot that is, essentially, A New Hope just jumbled up a bit and with some more humorous bits thrown in?  The imagination is there – I just wish it was steady throughout.

That said, the smart bits are smart.  A couple of running jokes are delightful (far more than the few that are irritating) and there are some moments of truly inspired wordplay, the sort of comedic timing that you usually only notice when they’re playing out live on a stage or screen.  It’s enough to give the reader hope and while the ending commits what is, for me, one of my absolute least favorite tricks (a sudden introduction of information that Radically Alters Everything You Knew) in all of literature… it’s enough to think that, hmm, if he does write another of these Rex Nihilo Adventures (and the subtitle there implies that he’s intending to do so), that one might be the wickedly original romp hinted at in these pages.

Rating: 3 out of 5.  A mostly pleasant diversion – readable in a day or two, doesn’t require much in the way of attention while still making the attention-paying reader smile and nod in reward for their engagement.  The overwhelming assault of sci-fi clichés is mitigated by the fact that Kroese delivers some really cool and really original stuff in the mix – I’ll be curious to see what happens to Rex & Sasha next.