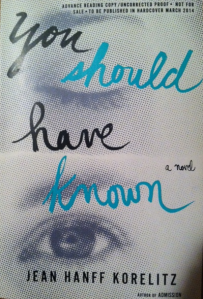 The Short Version: Grace Reinhart Sachs lives a pretty good life.  She’s got a gorgeous pediatric oncologist husband, a smart and already successful young son, and she’s about to publish a book based on her therapy practice called You Should Have Known, telling women that they ought to know better when they fall for bad men.  Well, not surprisingly, Grace gets some comeuppance when it turns out that she should have known – but missed entirely – that her husband was never quite who he said he was…

The Review: In what has become a recurring theme, both in a certain subset of literature (the literary thriller, we might call it) and in my reviews of said subset, The Gillian Flynn Effect is on full display here.  I would not classify this book as a thriller in the same way of Flynn’s books and the mounds of pretenders that have flooded bookstores since – but there are unmissable similarities.  Unfortunately, as with most of said pretenders, it’s a lot harder to write this sort of story in a compelling fashion than it might seem from the outset.

I’m not saying it’s a bad thing to withhold information.  Indeed, that’s part of the fun, as a reader – trying to figure things out, wondering what the missing piece will look like.  But there’s a fine line between teasing more information and leaving us in the lurch with a main character who is so blisteringly stupid that you wonder how, exactly, she got to the place in life that she did.  Such a character is Grace Sachs.  For one thing, the hubris involved in her book – the one that, cloyingly, has the same title as the one you’re reading – can only mean that she’s bound for a fall.  Like, from moment one.  But for her to be so willfully obtuse as things begin to disintegrate in her life… it baffles the reader.  Without delving too deeply into spoilers (although this is nothing the jacket copy doesn’t make clear), we know that the husband is clearly not on the up and up.  That becomes clear pretty much from the ‘start’ (lord, does this book take a while for anything closely resembling a plot to kick in) – and so for her to, repeatedly, several bloody times, stand sort of uncomprehendingly as people say oblique things to her or as the police question her for reasons that she doesn’t seem to understand… I just don’t understand how a person wouldn’t simply ask “uhh, hey, what’s… what’s the deal?” and get some clarity.

But even beyond this startling lack of intelligence on the part of our supposedly-quite-with-it psychotherapist who went to Radcliffe, the whole plot itself is just so hamfisted that it’s not really any wonder that nothing really happens in the book.  Anything remotely resembling ‘action’ happens offstage – and instead we’re treated to Grace’s inner monologue and her mundane everyday existence supposedly unraveling but we don’t even so much get a sense of anything unraveling as we do the sense that something’s happening kind of over there, behind perhaps a gauzy curtain or something.  As ‘revelations’ are doled out towards the end of the book about Grace’s husband, we’re genuinely left questioning her judgement – which, I suppose, is the point but really also it completely undercuts the character.
Because it’s not just her judgement when it comes to having picked the wrong man to spend her life with – the pervasive obstinate unseeingness means we don’t actually care what happens to her.  She speaks of this or that friendship that dissolved, of these horrible people who did X, Y, or Z… and to think that she was so suckered in by her husband that she never managed to even consider, I don’t know, calling up her best friend and finding out what happened?  I mean, I can hold a grudge but that’s when I actually have a grudge to hold.  Grace holds no grudges – she just lets these things fade away.  It makes no sense from a human perspective, especially in someone so supposedly perceptive as Grace.

Overall, there’s just something false about the book from moment one.  Even the little nuanced things like Henry (Grace’s son) and his violin teacher – a cute little quirk that later becomes a sort of symbolic shorthand, but without actually meaning anything.  There’s nothing to connect to here, nothing to believe in or associate with.  Despite the ‘bold’ statements of the first 15 pages (and I really genuinely did appreciate the potentially-divisive commentary on how women [and men, but to a lesser extent] really only have themselves to blame when they recognize but ignore danger signs in a relationship), it quickly becomes clear that it’s all just hollow.  It’s not so much “you should’ve known” as “you should have known better” – it’s not that you ignored something, but that you should have tried harder.  And the you, in this situation, is the author.

Rating: 1 out of 5.  Honestly, the book was frustrating.  With a blindingly obvious plot twist coming, one still expects to be brought along for the ride and engaged.  But Grace, as a character, is never terribly interesting and as her world crumbles around her, you don’t feel.  You just don’t feel – for her, for her son, for the people involved.  Korelitz could’ve gone for a thriller mold, she could’ve gone for a personal soul-searching sort of story… but instead, it’s 400+ pages of insipid internal monologue from a character who can truly only be described as an idiot.  There’s nothing interesting about that and there’s nothing interesting beyond the first 15 pages of this book – but then again, maybe I should have known.