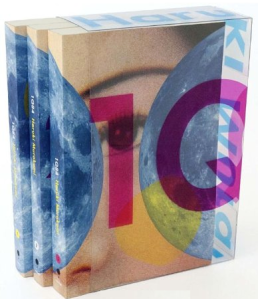 The Short Version: On her way to an assassination, a young woman called Aomame takes a shortcut down an escape staircase from the expressway and finds herself in a slightly-different world – one with two moons.  Meanwhile, a young man named Tengo rewrites an entrancing manuscript and ends up caught in a mystery he doesn’t understand.

The Review: 1Q84 was, I think, the first time Murakami really penetrated my consciousness as a reader.  I’d heard of Kafka on the Shore but he was really pretty much just the guy whose novels had the strange collages of imagery on the covers.  But this was a sensation of sorts – a sprawling epic (always a fan of those) that broke every conceivable record in Japan when it was first published.  And the buzz around it here was such that obviously it was going onto my list.  But in the last few years, I’ve found it harder to commit to sprawling epics from vaguely untested authors (untested by me, that is) – so many books, why should I devote a full week to reading this one?

What a week I ended up choosing, too: BEA week.  It’s somewhat fitting, really – that walk across to the far reaches of the West side of Manhattan is not unlike Aomame’s strange climb down the escape stairs.  You feel like you’re entering another world.
And Murakami, in his beautiful and easy way, does make you feel like you’re entering another world along with Aomame.  It’s quite the start to the novel – hints of her strange task ahead, the odd cab and its even odder cabbie, and the sort of shocking sense of “this is unreal”.  It’s not that it feels immediately like something is happening but rather just that sense, like the other drivers on the Expressway, that someone is doing something utterly strange and unexpected and how that can sometimes shake the foundation of your core a little bit.

And then almost immediately that earthquake stops.  And we meet Tengo – a writer, a vaguely stock late-20-something if I’m being honest.  Despite all the many things that Tengo does throughout the novel, I never felt like he was anything more than a character.  Part of that is because he’s caught up in the increasingly-surreal world of 1Q84 (“Q-teen eighty-four”) without even really quite knowing it, I guess – he’s our everyman caught up like Cary Grant in the midst of something larger.  But the ping-pong narrative, these two lines of story coming closer and closer but on a curve so you honestly aren’t sure if they’ll actually meet or if they’ll just run asymptotic alongside one another for the rest of eternity, does him no favors. There’s very little active about Tengo – he’s often quite passive.  Aomame is getting up to adventures while Tengo is sort of letting things happen to him.

There’s also the issue of the repetition.  I don’t know if it’s because the books were published in installments – Books 1, 2, & 3 as individuals instead of a single omnibus or even a slipcase like this – and so the author wanted to make sure people remembered things he’d explained earlier… but for the love of god, this book could’ve been 200 pages shorter had Murakami edited out the instances where he delivered pretty much the same line as he had 50 pages earlier (and 40 pages before that and 90 pages before that, etc) with slight variation.  It was immensely frustrating: if I had to hear one more time about the way Tengo saw his married lover or the particulars of Aomame’s body, I was gonna freak out.  Trust the reader to sustain the image of the character – you don’t need to, over the course of nearly 1200 pages, give them so many reminders.

The other issue, really, is the plot.  There isn’t much of it.  At the end of the day, it’s really about these two individuals finding one another in this odd alternate reality.  Which is a cool plot, don’t get me wrong – but when you describe it like that, you’d think that there would be some movement to it.  Whereas here, there’s a stateliness to the plot that’s almost like a tortoise.  Slow, steady, and while it eventually gets to where it is going, you rather want to pick it up and move it along to help out.  There are shadowy cults and organizations and people, there are the mysterious Little People who I think got rather a short shrift in terms of actually being in the story (they appear just often enough to make the reader wonder just what the fuck is going on – especially when out of nowhere, in the middle of an otherwise ordinary passage, one of them says “ho ho” and you’re like “?!?!!?”), and there are plenty of things that happen… but they happen over such a protracted period that, when you hit the third book and Ushikawa appears as a third narrator now, the plot almost seems to kick into overdrive.  Suddenly we’re circling the drain, growing inexorably closer to something, and it feels… actually, even though I know I was complaining about the length, it feels like cheating.  It feels like a cop-out, to suddenly draw things towards a faster end.  Especially when the end, as it turns out, is arguably the simplest resolution possible.  The stakes, you realize, have been relatively low the whole time – we’ve just been told that they were high.  And perhaps they are high, in a way – but they’re not high in the sense that you feel (even as the book races down the home stretch) that there’s much danger to our heroes.  It’s disappointing – even despite the lovely, clear-water beauty of Murakami’s prose.

Rating: 3 out of 5.  I respect the creation here and the ideas at play – Murakami boldly takes on literary traditions like Chekhov’s gun and stops just short of overtly telling the reader that he’s written his own “In Search of Lost Time”, all rather deftly – and of course the prose is wonderful… but there were huge stretches here where I was bored.  Not just disinterested, actively bored.  Whether it was the effect of the unending repetition, the nearly-stagnant plot action, or something else entirely, I don’t know.  But I went from (at the outset) feeling like I’d entered into a strange parallel universe too – sliding perhaps just one step over from where we are now – to just wanting the book to be done already.  Disappointing is really the only thing I can say.