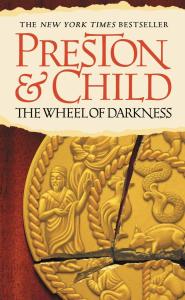 The Short Version: In the aftermath of Diogenes Pendergast’s machinations, Agent Pendergast and his ward Constance set off around the world and end up at the monastery where Pendergast learned the Chongg Ran meditation.  But a mysterious and possibly apocalyptic artifact has been stolen from the monastery and so Pendergast takes off in pursuit, leading him onto an ocean liner headed for New York – but will they make it there alive?

The Review: It’s hard to say that I didn’t, on one very superficial level, enjoy this book.  Because, at the end of the day, I don’t ever expect anything life-changing from these books.  They are meant to be fun adventures and this book succeeds on that front.

It’s just… that it doesn’t feel like a Pendergast novel.  Not really, anyway.
Oh sure, all of the necessary pieces are there – but they’re all brought into play in a way that, barring the denouement, feel perfunctory.  You could have stripped out the Chongg Ran stuff and replaced Pendergast with any stock Holmesian detective and the novel wouldn’t feel terribly different.  To put it another way, Pendergast never quite felt like Pendergast in this novel – until nearly the very end, in one of the more touching moments I think I’ve ever seen from the stoic gentleman.  But, again, the entire ending feels like the only thing specifically Pendergast about the story – and only because Pendergast was the main character.  Does that make sense?

I will give this to Mssrs Preston & Child: they do know how to tip their hat to the greats that’ve come before.  There’s a bit of The Poseidon Adventure here and a whole lot of that Agatha Christie “we’re all stuck in this boat/train/house… with a murderer” feeling.  There’s even a little Ocean’s Eleven-esque action.  But I never felt like they were doing anything other than “oh, here’s our isolation mystery” – the story never transcended any of its influences.  Indeed, there are moments that go so far as to befuddle regular readers of the series and I do wonder if the concept (murderer on an ocean liner) had come to them before they necessarily decided to put Pendergast into play.  As it is, the whole first act of the novel is rather choppy and profoundly rushed – and the last 150 pages or so clock in with 3-4 page chapters as though this was a Dan Brown novel.
And again, there’s nothing wrong with that at when you’re in the right mood for it.  But I don’t know that Pendergast is ever quite the right mood for such storytelling styles.  He seems more refined, as though he (the character) demands more of his authors and readers.  The character has become so psychically strong over the first 7 books that it’s hard not to think “huh, well that doesn’t seem right” when he does several things, repeatedly, out of character – for no apparent reason.  I guess his devotion to the monks is just that strong?

Let’s also take a moment to head into some SPOILER-y territory because there’s an issue that must, I fear, be addressed: the supernatural elements of the story.  The previous Pendergast novels have all delved into the supernatural (and they continue to, based on White Fire and the synopses I’ve read for Cemetery Dance) – but they’ve never quite gone all the way.  Yes, there are some super-natural things (see: The Cabinet of Curiosities, both Relic novels, etc) but they’re all pretty much based in science – in the way that Michael Crichton novels were based in science.  The devil of Brimstone is one of the best examples of this: science, in Pendergast’s world, will out.
So how, then, are we to take the introduction of a tulpa/thought-form?  Yes, it has been established that Pendergast’s abilities within the Chongg Ran (sadly fictional, by the way) lie on the border of some ‘magical’ abilities – it’s just his brain and some serious meditation, but such possibilities veer real close to magic.  But this is something else entirely: this is beyond the thought crossings, beyond the memory palaces.  This is truly supernatural and it feels, honestly, more than a little jarring.  I kept waiting for the explanation and then when suddenly there wasn’t one, I felt a little let down.  Indeed, the authors seemed prepared for this because within short order they also reveal a pretty hefty piece of information about Constance as the book closes that leaves the reader thinking about that instead of the uncomfortably out of place stuff that had come before.

But still, it’s not like I didn’t have some fun reading it.  And isn’t that the point, sometimes?

Rating: 2.5 out of 5.  Despite Pendergast being rather out of sync with what we’ve come to understand as his “character” for much of the novel and despite the fact that it feels like P&C attempted to shoehorn him into their own Agatha Christie-esque adventure… this was fun.  The stakes (while still, you know, life and death) were a little lower than they were during the Diogenes trilogy and the standalone singularity of this novel was nice.  But at the end of the day, it’s also just kind of ‘eh’.  It could have been several other things, all of them better – but instead, we got an adventure that, while not a waste of anyone’s time, feels rather unimportant or at least unmemorable in the grander scheme of things.