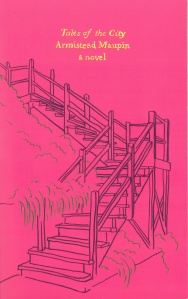 The Short Version: San Francisco, the 1970s.  Mary Ann Singleton, just arrived, finds her way to 28 Barbary Lane – a rooming house run by the quirky and wonderful Anna Madrigal.  The lives of the tenants of the house, and of those they encounter, swirl together to create a unique sort of a family experience.

The Review: The California Classics box set from Cali-Bookstore-Day flees LA for the beauty and weirdness of San Francisco – and a series-starter that’s so unassuming and delightful that you don’t realize how good it is almost until you’ve burned through the whole book.  Apparently, it was originally serialized – which I love.  It feels that way, as you read it: the chapters are all terribly short and bounce so quickly between characters that you feel like the book could be broken into installments, ones where each new piece would be a quirky reunion with your crazy friends.

It begins simply enough, with a young woman from the Midwest come to San Francisco.  She’s new to town and so is the reader – and so we have our entry into the wild, woolly world of San Francisco in the 70s.  Slowly but surely, we expand the swath of characters too until we realize that Mary Ann isn’t even the main character but just one of several.  And they are all delightful.  Mrs. Madrigal has a shady, questionable history that’s only hinted at here – but that just makes her even more lovely.  The trials and tribulations of the posh set are detailed with Beauchamp & De-De Day – names just as ridiculous as you’d expect from characters like that – and the various permutations of sexual orientation are spread across the entire cast.  In an almost deceptively simple way, the book reveals a whole time period without even seeming to try.

Because the book doesn’t.  It doesn’t try to do anything at all.  It just simply is – it’s humorous, yes, and heartfelt too… but it doesn’t seem to have an agenda other than to present these stories almost as though they’re being reported, journalistically.  That doesn’t mean that the writing is dry or clinical, though.  I simply mean to say that the experience feels very realistic, to use an overwrought term.  Sure, the serendipitous connections that tie so many of the characters together even without their knowing might be seen as too much effort, authorially – but you could also argue that we, as readers, see the connections where readers do not.  How often does the world end up revolving around the same people we know – and when you walk into a party and say “wait, you’re here?” and they say “I came with so-and-so” and you realize that your world is way smaller than you thought.  It doesn’t happen so much anymore, I suppose, with Facebook and whatnot – our circles have not gotten smaller or larger, just more apparent – but that marvelous sense of surprise is one of the joys of this book.

At the end of the tale, though, you’re left wondering what else.  Not in a way that makes you want to run out and grab the sequel(s) – but rather in a way that makes you think “hmm, okay, these little lives play out and now what?”  There is a small-scale sense of an individual moment that has almost become anachronistic.  Just think, for example, about gay culture in the 70s vs. today.  San Francisco has always been at the fore of the gender/orientation equal rights movement – but it has become such an accepted, understood way of life that today, I couldn’t fathom a father as oblivious as Michael’s.  At the same time, I couldn’t imagine a scene so sexually open as the cruising scene in San Francisco in this book – for any kind of orientation.  The straight crowd’s adventures are perhaps actually more shocking in a way, like the scene at the supermarket… it just feels unfathomable in the modern era.  Of course, we also have Tinder so maybe things just look a little different but are actually pretty much the same.

Rating: 3.5 out of 5.  An enjoyable, fizzy cocktail of a diversion.  The prose is quick and smiling and the story engaging – but I got the sense even as I put the book down that, to jump right into another, would be like drinking too much Strongbow: you’re feeling great and then all at once you do not feel so great anymore.  So why not stop while you’re feeling great?  I smiled through pretty much the whole book and Maupin’s quirky little boarding house is a place I’d love to come back to some time, to see my friends again.