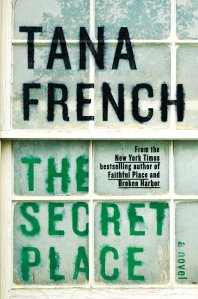 The Short Version: Detective Stephen Moran’s once-bright-looking career has… not bottomed out, but he’s also not doing what he wants – and what he wants is a spot in Murder.  When Frank Mackey’s daughter turns up with a lead on a year-old cold case murder at her posh boarding school, he teams up with Detective Antoinette Conway in the hopes that this case might be his shot.  But the particulars of young girls are more thorny than he expected and over the course of a single day, he has to show everyone just what he’s made of.

The Review: Is there anybody better than Tana French in the crime/mystery genre these days?  I’m actually asking that as a serious question because, for my money, I don’t think there is.  Each time I crack open one of her novels, I always worry (as this brilliant review put it) that the magic won’t be there – but then, happily, it is.  In my review of Broken Harbor, I regretted taking my time in waiting to pick it up and I know better now; I know that, no matter what, Ms. French will deliver.

This is not to say that she’s delivering a formula, though.  Oh contraire.  The only formula she tends to stick to is bringing a supporting character from a previous novel to the fore – and here (as I think I safely predicted in my review of Faithful Place) we get Stephen Moran, out from the shadow of Frank Mackey (or so he’d think).  But where the other novels take place over some considerable spans of time, this one’s present tense action is less than 24 hours.  Holly Mackey, Frank’s daughter, shows up at Stephen’s desk bringing a Post-Secret sort of postcard (her school has a message board of sorts, created to help girls let off anonymous steam) that implies that someone at the school has information on the mysterious death last year of a young boy from the neighboring boys school – and that morning, he ends up at the school with a low-ranking Murder Squad member, Antoinette Conway (who, I’ll guess, will be the next member of the squad to get a novel – although who knows).  What begins as a simple follow-up becomes something much more intense, though, as the day goes on – and French keeps the screws turning.  Every time the detectives or the readers think they get a handle on the mystery, a wrinkle appears, usually delivered by the alternating chapters: flashbacks to the year before.

Nearly each one opens (with the exception of the first and, I think, a handful more) with a note that Chris (the now-dead young man) had only X months/weeks/days to live.  And as we see the two cliques of girls who might’ve had opportunity/motive sniping at each other from the present, we see them circling round each other in the past.  And French spares nothing in this incisive look into the adolescent girl psyche: it’s not a terribly wonderful place to be.  There are wonderful things about their lives, sure – and the most wonderful might be their friendship, especially the friendship between Holly/Julia/Rebecca/Selena – but teenagers are rough, man.  The boys and girls alike.  And I found myself marveling at the strength of the younger girls’ friendship, at their ability to stick together as a cohesive unit.  Maybe it’s because I didn’t have that in grade school – in fact, I don’t really know anyone who did, save for perhaps my sister and her best girlfriends.  But it didn’t feel fictional.  Their friendship felt real and multifaceted and entirely lived-in.  Even the friendship between the older girls, controlled with a domineering fist by Joanne, felt realistic (if perhaps a bit less healthy of a clique).

Meanwhile, in the present tense action, we get to see how these relationships had changed since they began so long ago.  And the end is absolutely heartbreaking – but there’s a lot of heartbreak that comes before that, too.  A scene with Holly at home just before the end of the novel, where her mom recounts going out with an old friend from grade school… I think it will resonate not just with girls and their grade school chums but with everyone and the cliques of friends who they found to be so inseparable at the time and that turned out to be anything but.  I could run into my high school friends now and perhaps have a great night of laughs and memories… but would I want to regularly see them?  No.  The same goes for the larger group of my college friends, too – our lives have diverged.  Things have changed.  And that passage of time (represented on the one hand by Detectives Moran and Conway, on the other by the girls at Kilda’s) is what French is really memorializing here, I think.  The mystery is just an opportunity to do that (as it has ever been with her work).  Which, again, is not to say that the mystery isn’t amazing.  It is and she knocks it out of the park, as ever.

The thing that, for me, keeps me coming back to French’s work is not just the exceptional prose or the tightly-plotted mysteries or even the smart commentary on modern life – but that little extra thing, that little soupcon of the mysterious/otherworldly/Gothic/creepy.  It’s been in all of the books, in one way or another: previously most prevalent in The Likeness but it’s there in the mysterious (and unsolved) case from Rob’s past in In The Woods, it’s there in the ghost estate of Broken Harbor, it’s even vaguely there in the call-from-the-grave that hovers over Faithful Place.  And here, French goes all-in.  I won’t tell you exactly how, although the circumstances of an all-girl’s school and cliques ought to make it kind of obvious.  And I think that this little plot twist will be, perhaps, the most divisive about the novel.  It isn’t integral to the plot, not really anyway – but I think it is integral to the characters and to understanding the way that the plot then develops.  To continue to skirt the actual spoilers, let’s put it this way: those of you who don’t believe in your zodiac sign will likely say that it’s unnecessary and we could’ve done without the mystical hubbub and instead made the story just about the girls and the way that the special confluence of events that happens to every young kid’s life is what led to the eventual outcome.  But those who indulge a bit more of the spiritual/spooky side of things will crack a smile to see French fully indulging what had only ever been hinted at before: the sense that there are more things in Heaven and Earth, Horatio…

Rating: 5 out of 5.  The book does feel a bit different from the previous four, largely due to its ‘unique’ structure – but that isn’t a bad thing.  Rather, it shows that French’s imagination is still fresh and still capable of surprising a reader.  The case itself is a humdinger and the tension does ratchet up quite well as the end draws near.  But the entire novel is a pleasure to read, thanks to the clear-stream prose and the uncanny ability to enter the minds of several more very real characters in the Dublin Murder Squad world.  Ms. French continues to prove herself a reliably excellent author and one of the best sneaky champions of the darkness that lies just beyond the door of our everyday lives.