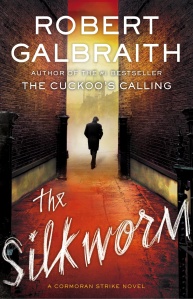 The Short Version: Private detective Cormoran Strike has found business mostly returning to normal several months after the events of The Cuckoo’s Calling.  But when the wife of a bad-boy author turns up asking him to find the errant writer, he finds the man dead – and finds himself at the heart of another high-profile case, one that sends him into the caustic circles of the literary elite…

The Review: At the end of the novel (no spoilers), Robin and Strike have a moment of banter about whether anyone calls Strike “Lightning” – and whether lightning can ever strike twice.  Could one see a hint of author-to-reader query there as well?  After all, Mr. Galbraith is in fact Ms. Rowling, whose other series may never be toppled from its rarified perch as both bestseller and favorite.  And during the hullabaloo around the psuedonymical unmasking, there were questions asked about why the first (very good) installment in the series went mostly unnoticed until said unmasking.  But none of that very much matters now – because lightning has, for Ms. Rowling, struck twice.  Cormoran Strike, Robin Ellacott, and the whole gang are as vivid and well-written as any of the characters in the Potter novels – perhaps even more so.  And her assuredness with the pen is the sort of thing that can only come from experience; the author has grown immensely from those early days.

But enough about the early days.  Let’s talk about the now – although the plot of this novel seems to also be the sort of thing that wouldn’t have been possible without the fame coming first.  See, Galbraith is taking us into the literary world now: agents, publishers, authors.  Owen Quine, the missing author, has strains of Palahniuk, Amis fils, Ellis, McInerney, even David Mitchell’s Crispin Hershey – and there’s a tacit understanding from very early on that we’re meant to take this world at face value.  This isn’t an author writing based on what they’ve seen in movies or on TMZ – this is from experience.  All industries, of course, have their gossip and their tribulations, but Galbraith knows fame in the literary world better than most, so while we can safely assume that no one here is based on a real person, that doesn’t make the story any less realistic.

What I’m maybe most struck by, honestly, is the pacing of the novel.  There are a few magnificent set pieces, including a brilliantly written drive out to Devon and of course the big finale, but the author allows the novel to breathe a bit.  Strike continues to work his other cases even while focusing on the Quine case and the rest of his life and Robin’s life spin on while the case plays out underneath them.  It feels different from the usual detective novel, where they’re on one case from start to finish – but it takes a novel like this to realize how kind of silly that is, conceptual.  Cop novels, like the Dublin Murder Squad books, it makes a little more sense, but PIs can’t all be Sherlock Holmes.  And Strike most certainly isn’t.

This is no knock against Cormoran, of course.  But his shortcomings – the lost leg, his stubborn opinions about how to behave with/around women (not misogynistic so much as old-fashioned and also just British), the stubbornness in general as related to all things – are endearing and they make him immediately human.  The same goes for Robin, whose personal life is developing in complex and nuanced ways that a reader might not have immediately expected.  Oh, sure, there’s a great frisson between the detective and his girl Friday, but I for one see it as something much more complicated than romantic feelings.  Romance, that’s predictable – but friendship, that’s harder to pin down. And Galbraith is doing it spectacularly (although I don’t think anybody is ruling out romance, not just yet anyway).

Anyway, back to the plot: I won’t give too much away except to say that Galbraith actually writes several plots into this novel.  The first and primary is, of course, our main story – but with no little amount of humor and satisfaction, the outlines (or, in the case of the mythic Bombyx Mori, more than just an outline) of several other novels are delivered as well.  Some, like The Brothers Balzac, are more fleshed out than others (sorry for that terrible pun) – but they’re all there and they all feel fully formed, fully extant in the world that has been created for us.  And everything else about this series feels that way too.  Strike and Robin, of course, but the secondary characters are all unique and real and so too are the settings.  We’re there in Strike’s little attic flat, in Daniel Chard’s strange house, in the room where Owen is found.  It seems effortless – but then, that has always been part of the author’s charm.

Rating: 5 out of 5.  I won’t go on to say much more – at the end of the day, it is indeed just a really well done crime novel.  But Galbraith puts more care into it than the genre necessarily requires, making the reading experience damned lovely. Plus, it’s fun to see a mystery dropped into the semi-meta world of publishing – knowing that the author is perhaps taking the opportunity to comment slyly on the world that all authors must live in while also using that fact, the fact that this world is the one that Robert’s alter-ego knows best, to further enrich the writing.  It’s a fun adventure, although much more for grownups than the previous series.  Still, with any luck, Strike will grow to be hailed as just as important a creation as Potter – for he is proof that sometimes lightning does it twice.