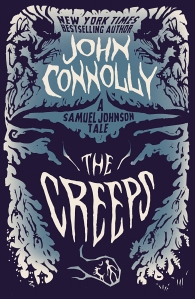 The Short Version: Samuel Johnson, having not only stopped an invasion from Hell but having escaped its very environs, has a girlfriend.  It’s not going terribly well.  Meanwhile, an answer to the strange things about his town of Biddlecombe may have been discovered – just as a new, strange Christmas shop is about to open downtown…

The Review: Well if I’d known this was a Christmas-based novel…
But who cares: Connolly’s Samuel Johnson tales (The Gates and The Infernals) have always been a part of The October Country and it was a pleasure to be back with him, Boswell, Nurd, Wormwood, the dwarfs, Dan, and the rest of the gang.  And while this could easily serve as the last installment in a trilogy (there’s a lovely, downright beautiful, epilogue of sorts that leaves the door open for more tales but also firmly allows this to be the end), I find that I appreciate Connolly’s Pratchettian humor to the point that I hope it isn’t the last.  I want to enjoy tales of Samuel’s adventures for many years to come – but enough of that, now: let’s talk about what’s just happened.

For one thing, Connolly continues to build on the science he laid out in the first two novels: this is a story where the multiverse plays a huge role.  In fact, the ‘villain’ of the piece – these mysterious Shadows – comes from the spaces between universes, the dark matter that we otherwise assume is just, you know, energy or whatever.  But what if, out there in the darkness between worlds, there were actually things?  Things that devoured worlds simply because it was impossible to stop them: because some darkness is strong enough even to snuff out light.  A creepy thought and while Connolly keeps the action on the lighter side (these are YA books, ostensibly) he doesn’t shy away from the thought – because, on the flip side, it also allows him to write about planets that have teeth in the Dragon Dimensions.  The joy of his imagination is that (hopefully) kids see both the scary stuff and the cool stuff and realize that it’s all part of the same world, that our world can be both scary and cool and that’s okay.

In terms of our hero, Samuel shares the spotlight this time with the entire cast.  Nurd and Wormwood continue to develop and grow as characters and Dan’s dwarfs end up with a whole arguably-more-interesting side plot of their own that brings them into direct contact with the weirdness going on in Biddlecombe.  As such, Samuel doesn’t end up having that much to do – and his own personal side plot, the deterioration of his relationship with Lucy Highmore, has more weight than his actual encounters with demons and creepy things.  Although perhaps that’s for the best: I can’t remember another YA-oriented novel that deals as well with the realities behind sometimes needing to break up with someone.  It’s the sort of thing where kids might not get it – but adults will nod with a knowing smile and maybe it’ll stick in the kids’ heads.

The coolest thing, I think, about this novel was the exploration of just why Biddlecombe was so weird.  There’s some occult mumbo-jumbo that I won’t give away – but I was fascinated by it.  For whatever reason, creepy architecture and town planning is, well, just damn creepy to me and Connolly does it here with some panache.  The phantasmic scenes in the department store in the second half of the book are pretty scary, including a fun cameo from Max-Schreck-Nosferati, and somehow Connolly’s droll British humor in the footnotes doesn’t detract from the scares so much as it runs parallel to them.  It makes for a fun read, all around.

Rating: 4 out of 5.  A delightful installment, wrapping up several threads from the previous two books while also striking out into new(ish) territory.  Samuel and his friends continue to grow and develop organically and the focus never shifts too far from ensuring that the story, however simple, is well-told.  There are some great laughs, a couple great frights, and the whole thing ends up being something really solid: the sort of book I hope, someday, to read to my kids – knowing it’ll entertain us all equally.