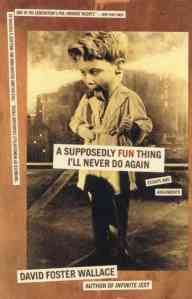 The Short Version: A collection of some of DFW’s best-known long-form essays, including two about tennis, one about a cruise ship, and one about David Lynch’s Lost Highway.

The Review: Alright. Knives out, folks – this is going to be an unpopular statement (and it’s only after discussing this book with my BookClub, leading to one of the more delightfully heated discussions we’ve ever had, that I feel comfortable saying it).  I do not like David Foster Wallace.  In fact, the title of this collection is pretty much how I feel about reading his work.  I will never do it again.

But let me tell you why I didn’t finish this collection.  And I should also asterisk that by saying that I did at least start each of the essays in the collection.  But I only finished the first one (about tennis), the State Fair one, and the David Lynch one.  And all three of them, I have to admit, were a struggle.  But I did start all of them and I feel as though I could give a star rating to this book but I don’t want to.  I feel as though it’d be unfair, both to Mr. Wallace and to myself.

I am a pretty “pretentious” person. I wear this epithet not as a negative thing, because I don’t believe that I actually fit into the dictionary definition so much as I do the slang definition that people like to use in giving me shit for what I like and how I live my life.  I shrug it off. I use big words, I drop obscure references, I like the things that I like and am pretty particular about them, all of that stuff. For my money, that just makes me willing to use my brain.  I don’t want to apologize for myself, not anymore.  Of course, that very sentence could come off as “pretentious”. So.
Point being, Mr. Wallace is someone in whom I can and do see bits of myself. But it’s 2014, not 1994. And Mr. Wallace’s work feels stuck in the 90s, for better or for worse. Snark has developed in the ensuing twenty years and it’s no longer enough to just be a sharp curmudgeon of an observer. But none of this is Mr. Wallace’s fault, so let’s address the stuff he’s done for the time and place that he did it.

…nope, I still can’t get behind it.  Let’s discount the essay about TV, for one thing – sure, it’s pretty prescient for what TV would eventually become (a haven for excellent writing and long-form storytelling) but good god does he show off just how much he knows without actually teaching you anything new.  But TV has truly, irrevocably changed so fucking much since 1994 (which, I believe, is the last iteration of that essay) so you can’t look at that essay as anything other than a time capsule now. Perhaps it’s because I’ve never known anything else. I didn’t watch much TV as a kid and only tuned in to series later in life that’d already taken on these lessons of fiction-writing.  I’ve never known anything else and so I shrugged.
The other essays, however, address things that are a little less stuck in time: state fairs still exist, kids still play tennis, David Lynch is still an important cultural figure, and it feels like it has been a while since we heard about a problem on a cruise ship but I’m sure it’s only a matter of time…

I find his work indefensible, to be honest.  I wish I could’ve recorded the conversation at my BookClub meeting because it’s far more nuanced and eloquent than I’m being right now – but the bottom line is that I don’t feel like Wallace is doing anything more than being self-congratulatory in his intelligence.
He is, don’t get me wrong, a very talented writer. I mean, that was the thing that redeemed The Broom of the System for me, which was an otherwise pretty bleh novel. The man can spin a phrase and there are moments in each of these essays that had me go “mmmm” or laugh or feel something. But they were few and far between and my overriding sense was one of a man who was thrust into situations that he did not like or that confused him and he was getting off, in a way, on picking people apart.  Look, I believe that consumerism is a plague on our planet and the middle of the country scares me too. I don’t understand the appeal of a cruise and I am fascinated by the work of David Lynch.  But Wallace is making observations here without providing any further analysis.  He provides the veneer of analysis but who walks away from this book feeling like their mind has been changed about something or that they’ve learned a new thing?  This book is like the panel discussions where a bunch of educated people of privilege discuss a topic like poverty or racism to a room of educated people of privilege and everybody leaves feeling like they’ve achieved something by talking about it and good for them!  Or, for a more recent and specific example, the Ice Bucket Challenge. Raising money for ALS? Awesome, not taking that away from you – but why do you need to wear your charity on your sleeve and borderline bully other people into doing your specific charitable thing? What if I want to quietly give my money here or there instead?
I find that level of self-involvement to be one of the most infuriating things about intelligent people and DFW is no exception. He spends a large portion of the two arguably centerpiece essays of the collection (including the title essay) belittling people or things that he doesn’t understand / doesn’t like but he doesn’t seem to seek an understanding of why those people do those things.  He barely seems to seek an understanding of why he dislikes those things.  I don’t need my essays to inspire change or thought – but I expect them to be more than a rambling diatribe dressed up as a Longread. (yes, the timeline on this is backwards, but so it goes for my own cultural timeline.)

Of course, while I’m at it, I might as well really go whole hog: I don’t find him terribly original in any way.  Perhaps he was in the early 90s and the world I exist in now would not be the same had he not been on the scene.  If this is the case, I can respect that conceptually – and perhaps the people who I read and enjoy now are only extant because of DFW’s influence… but be that as it may, I cannot bring myself to enjoy his work.  Oooh, you’re footnoting.  Great, Terry Pratchett has been doing that shit in his novels to what I believe to be better effect for far longer.  Granted, DFW’s footnotes are whole diatribes and digressions – but Pratchett uses them with far better economy and, yes, as a joke most of the time.  Maybe, again, it’s because I came up through Pratchett – but I find myself wanting, instinctively, to laugh when I head to a footnote.  They might be apples and pears, where you can’t really compare them but also I like pears better.  DFW’s, brilliant digressions though they might be, felt to me like nothing more than a mind in need of stronger editing.  (ed. note – and I acknowledge the irony here, seeing as I’ve edited this piece at the behest of an editor friend to make some of the points clearer and am also one who is guilty of dropping my digressions straight into paragraphs instead of at least removing them from the main stream –DB)
Also, this sort of post-modern gonzo journalism just irritates me, especially when it won’t acknowledge itself.  I did some research and found that DFW didn’t like Hunter S. Thompson’s work for the most part, calling it “naïve and narcissistic” – which feels like a staggering lack of self-awareness.  I know he didn’t consider himself a journalist but, okay, you write essays for magazines.  Split the hair however you want, you’re not doing anything in these essays that quote-unquote journalists don’t also do.  Hell, you can’t tell me that “Getting Away from…” (the State Fair piece) isn’t basically a Thompson pastiche, with the near stream of consciousness observational recording of an experience.  I could see a bizarro universe Johnny Depp-as-Hunter Thompson reading the words of that essay and it would fit in almost seamlessly.  Give the man some drugs and we’d be off to the races.

At the end of the day, I feel almost more vehemently about this than I should, because DFW has been held up as such an important part of the modern literary canon.  And perhaps Infinite Jest is worth my time still. But it won’t receive it. There are too many other books to read and I’m done giving this guy a chance – because I don’t find him entertaining.  David Foster Wallace is a supposedly great author that I’ll never read again.

Now, please, have at it.

(ed. note – this piece has been edited throughout to better reflect a few less-than-ideally-formed thoughts. the gist remains the same, however. –DB)