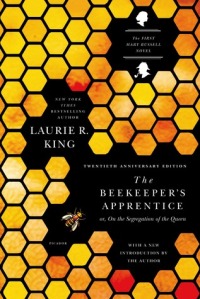 The Short Version: After Sherlock Holmes retired to the Sussex Downs to keep bees, his story might’ve ended. But when young Mary Russell nearly trips over him (her nose was in a book, he was lying on the ground watching said bees), the two recognize kindred intelligences and so Russell becomes his apprentice and eventually partner – just in time for a dastardly part of Holmes’ past to put not just Holmes but everyone he loves in great danger.

The Review: There are two types of Holmes stories in the post-Conan Doyle age (much like there are two types of Bond stories).  One type, the far more prevalent, keeps Holmes a young man dashing about late Victorian London.  The dressing might be different (ghosts, steampunk, etc) but they are essentially the same sort of tale.  Watson will be there, they will be young, things will be as ever they were.  The second type of Holmes stories take him into the future, one way or another.  Maybe it’s Sherlock on BBC or Elementary on CBS, literally depositing him in the here & now.  Or maybe it’s aging him into World War I and beyond – seeing how the aged detective gets on.  But nearly all of these tales retain one thing: Holmes’ primacy.  He is the main character, the story mostly told through Watson’s memoirs once again.

So what a delight – a reinvigorating one – to see Holmes brought to life through another’s eyes: the eyes of the young Mary Russell.  Laurie R. King’s first novel of Holmes & Russell humanizes the Great Detective in a way that Conan Doyle certainly never achieved and that few of the many, many modern writers have done either.  It’s almost like experiencing Holmes anew, in a way: we would do well to know his backstory, the history, etc, but King doesn’t get bogged down by any of that and instead feels free to rewrite things as needed.  As such, Russell bursts onto the scene as almost immediately reputable as we have come to see the good Dr. Watson over the last 100+ years.  As gimmicky as it seems, the opening note from Ms. King that she received these manuscripts in a strange parcel delivery and that these are truly Ms. Russell’s words lends an air of, well, authority to the stories.  In the same way that Watson’s stories are treated as a sort of truth (never hearing from the great man himself), so too are these through that simple meta suspension of disbelief.  It’s a remarkable success right from the start.

And Mary is a delight.  She’s whip-smart, brash, and yet not any sort of caricature of a whip-smart, brash young lady.  She has trauma in her past, she has personal failings, and she has things that feel almost signpost-y but never quite feel that fake.  She doesn’t exactly feel real – but nobody in a Holmes story ever does.  They are grander than we are, for good reason.  When Christopher and I talked about this book on our podcast (episode to come on Dec. 15!), we got into this a little bit: this idea that these characters, we come back to them because we seek that knowledge that our problems can be solved in a straight line.  That’s what detectives, especially Holmes, provide us with: that security, even if we never actually feel it in our own lives, that things can be solved.  And to see Mary Russell also capable of it delivers another boost: that Holmes isn’t the only one.  Maybe we aren’t smart enough to do it, but maybe other people are. Wouldn’t that be something?

Of course, we already know a few people who can match Holmes’ intellect: Adler, for sure (and her story is mentioned briefly here, an interesting contrast considering what is hinted will happen with Holmes & Russell), and of course James Moriarty.  And while Moriarty is firmly dead and gone, the work that Holmes neglected to do in the wake of his death still haunts him.  Even when Mary’s maths tutor brings up some of Moriarty’s work on base-eight mathematics, the sense that he lingers around the edges of Holmes’ life still is delightfully chilling.  The main case itself, the one that takes up the latter half of the novel (the front half being given over to Mary’s training and to a smaller, although no less important, case), is a gripping one and it gives several nods to Holmes’ past while still pushing him forward into the future.  While it doesn’t entirely come off with ease, it’s a bold first effort by King and one that gives me enough hope that future stories will feel truly original.  It was almost as though this tale was her saying “I’m going to address all of these things about the Holmes we know, so that I may then move forward”.  Here’s hoping that’s true, because I for one am excited to visit both Holmes & Russell again.

Rating: 4 out of 5.   It’s fun to see King have her way with Watson, Mycroft, Mrs. Hudson, and the rest of the gang (even Lestrade’s son appears, now the Inspector Lestrade working at the Yard) – but Mary Russell is the true winner here.  She enters into the world of the canon and breathes new life into it, in a way that I think does Conan Doyle proud.  There is a new high standard for Holmes pastiche and it lives here.  It’s more than just writing a new Holmes story, it’s making Holmes new again – bringing him to life again.  How wonderful.