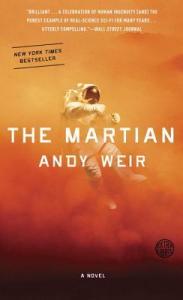 The Short Version: Astronaut Mark Watney has a problem. Well, actually, a lot of problems – but they all boil down to this: he’s stranded on Mars.  What ensues is a compelling struggle for survival and a testament to human endurance, both those in peril and those who help to save them.

The Review: Auspicious timing with this one, eh? It felt important for me, honestly, to read something space-related right now (I’d rather not be on this planet with how horrid the news has been these last few weeks) – and what with the uplifting news that the first Orion launch went smoothly and that the plan is to get human beings back out into space and even to Mars within the next 20 years or so… well… a book about a dude on Mars feels right, right?
…of course, this is a book about things going pretty terribly for said dude on Mars. So.

The book gets off to a pretty blistering start, opening with one of the better opening lines ever written in fiction: “I’m pretty much fucked.” Due to a sandstorm and a bad break, Mark Watney has been left on the surface of Mars for dead as the rest of his team (Ares 3) aborted their mission and is headed back to Earth.  Except he isn’t dead and doesn’t particularly want to be, either. A botanist and engineer, he’s the sort of snarky MacGyver-type that you might just believe could survive, too.  And the book is, largely, devoted to his honest, darkly humorous reflections on just what he does for nearly 600 Martian days while Earth (appearing occasionally in third-person interludes) attempts to get him home.

There’s a lot of science. So much so that any given journal entry (the standard format of each mini-chapter inside of chapters) can get a little boring – his relentless good humor (dark though it may be) about his circumstances, even when something goes nearly catastrophically wrong, is the only thing that lets you glide past though sometimes dull scientific explanations of why this combination with that will do the other thing.  That said, it’s pretty cool to look at a sci-fi book that really has its science going for it: Weir definitely did a fair amount of homework here.  But that’d be deadly without the Yeager-esque badassery of Watney, which would in turn be overbearing and frankly a little unbelievable were it not for the way it balances the sci of this fi.  Balance, as it turns out, is a damn good thing to have in a novel.

And Mark’s positivity, his dogged can-do belief that he will in fact survive, is also a pro for the novel – especially reading it right now, at this time in the world.  I don’t know, it was nice to see the world come together around the idea of saving one of our own.  It felt a little unrealistic when other space agencies got involved (dancing around a SPOILER here a little bit) but who knows, maybe what happens here is true: maybe the nerds of the world (I mean that with love) could unite in such a way as to make the governmental bullshit irrelevant.  And the final pages deliver a beautiful testimony on the power of human beings coming together for a grander purpose – a sense that that is our real glory.  You can’t help but finish this book and then look at Orion and think “well, goddamn, maybe we all could get along in pursuit of magnificent goals.”

But the happy-go-lucky thing can only get you so far and I have to be true to the reason for this blog, which is to mention critical aspects of a book too.  And the writing sometimes leaves a bit to be desired, overall.
Look, I’m not gonna do the thing of slagging off popular/populist writers – I enjoyed Dan Brown’s first two novels as much as anybody.  And this novel shares some of that DNA: you’re not going to go too far without a Problem! that suddenly faces our Hero – and, similarly, you’re not going to go too far beyond the Problem! without an Ingenious Solution! appearing like some kind of wild Pokémon.  The secondary characters (all of the characters are secondary except for Watney) are almost instantly forgettable, although Weir does a decent job of giving them each one or two quirks that allow you to differentiate them while you’re in the midst of the book (the commander of Ares 3 loves disco music and 70s stuff, the German dude is a caricature of the villainous German without the actual evil, etc etc).  And there are some moments where you can’t help but think “wait, nobody would ever actually talk like this” when you read Watney’s reports.  There’s something a tad too authorial about them – and, although this is a comment that will undoubtedly ruffle some feathers, the fact that he self-published this book before it got picked up would explain some of that.  Some of the writing just feels unpolished, “fan-fiction-y”.  Not enough to swamp the book but enough to, at times, make me grimace and pull me out of it a little bit.  It’s what keeps this squarely in that Dan-Brown-esque camp for me.

Rating: 3 out of 5.  Well, the adventure of the novel cannot be beat, plain and simple.  I tore through the book, especially the last handful of pages, so fast that I thought it would fly out of my hands.  And also, the human-spirit thing that gets affirmed here feels important right now.  But also, it’s not without its problems.  Watney never feels like anything but an invented character (MacGyver himself, come to think of it, probably wouldn’t have come up with some of these solutions, let alone some botanist/engineer) and the rest of the cast comes off even worse.  And the writing at times is just not-great.  But the thing is, much like with a Dan Brown novel, none of that really matters if you have fun.  I hope none of our Mars missions go as awry as this – but if they do, I do hope there’s a Mark Watney aboard.  I’d be proud to share my humanity with him.